Sanne De Wilde explores the medium of photography and effectuates this in regards to subjects related to the role genetics, identity and perception play in people’s lives and how this shapes and affects communities and makes people vulnerable in the eye of society. In her photobook ‘The Island of the Colorblind’, which has won many distinctions, Sanne de Wilde’s conceptual approach becomes impressively perceptible. With this look at the phenomenon of colour-blindness on the Pacific atoll of Pingelap, de Wilde depicts a mysterious, exotic world. Her pictures employ a combination of various processes to tell of diving into a community that functions according to its own laws. At the same time, de Wilde attempts to question her own perceptions also trying to include the perspectives of the island dwellers. The topic of equality, or rather inequality, runs through the work of Belgian photographer Sanne de Wilde like a red line. De Wilde reflects not only on the medium of photography; her projects also examine the role of identity, perception and the question of how genetics can shape and influence communities. At the same time, as a professional female photographer she herself belongs to a minority group. In an interview with de Wilde, picture editor Miriam Zlobinski will attempt to answer questions concerning de Wilde’s authorship as well as her working methods for reportages, books and exhibitions.

The Island of the Colorblind.

In the late eighteenth century a catastrophic typhoon swept over Pingelap, a tiny atoll in the Pacific Ocean. One of the survivors, the king, carried the rare achromatopsia-gen that causes complete colorblindness. The king went on to have many children and as time passed by, the hereditary condition affected the isolated community and most islanders started seeing the world in black and white. Achromatopsia is characterized by extreme light sensitivity, poor vision, and complete inability to distinguish colors. Portraying the islanders that by their fellow Micronesians are described as ‘blind’ resulted in a conceptual selection of images that mask their eyes, their face, or their ‘vision’ and at the same time invite the viewer to enter a dreamful world of colorful possibilities. 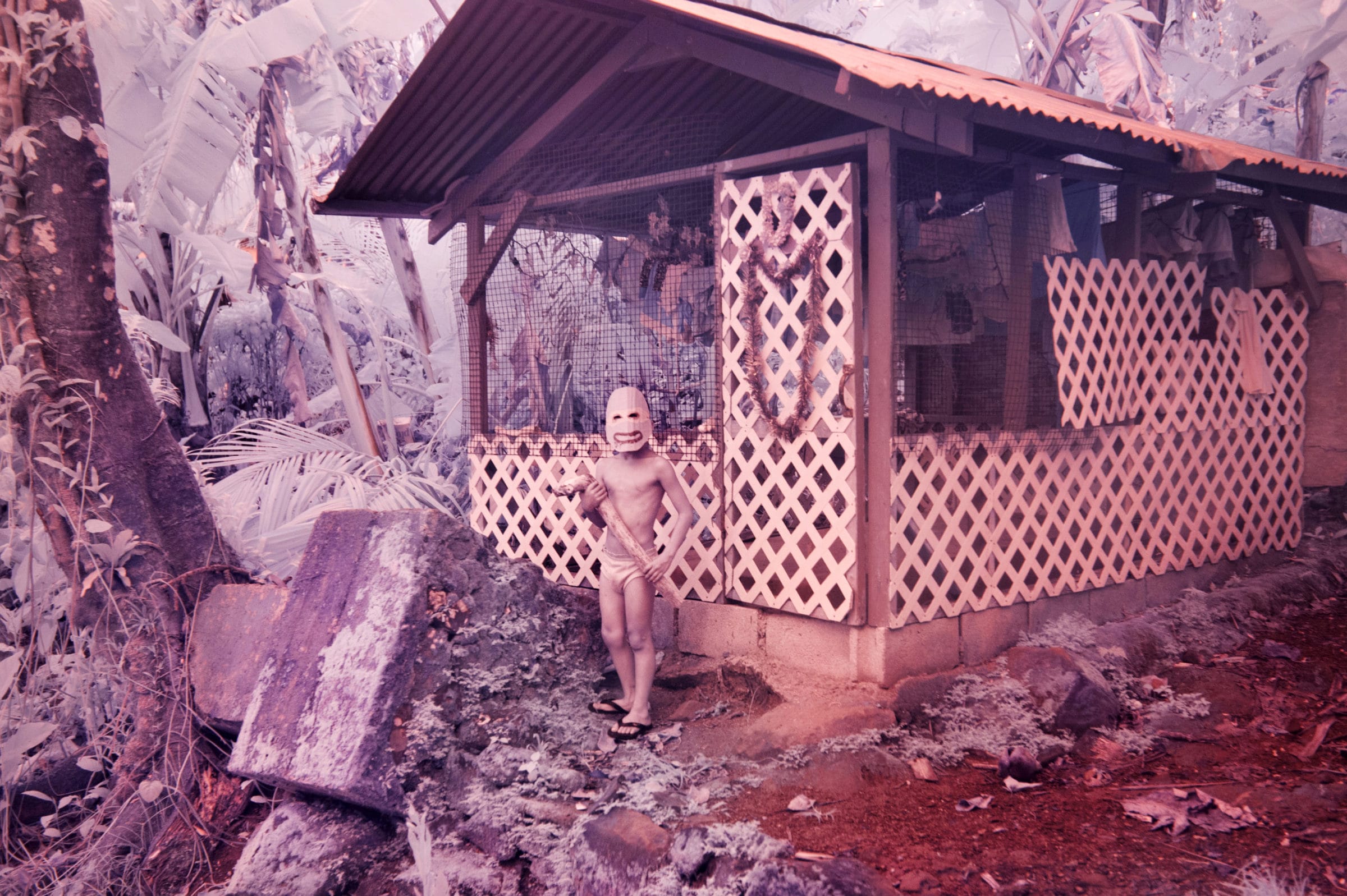 Jaynard (achromatope) is playing in the garden with the branch of a banana tree that had to be cut down. He’s wearing the mask I made for him for Halloween. He loved it so he kept putting it on the days after.

Jaynard (achromatope) plays with a disco-light-torch I brought from Belgium. I asked him what he saw. He answered ‘colors’ and kept staring into the light.

On the way back from a picknick to one of the uninhabited small islands around Pingelap with the colorblind Pingelapese and all the children of the one school of the island. The bay is now protected, islanders are no longer allowed to fish for turtles. Because of the infrared colors the scene looks very romantic, at the same time there’s the visual connotation of the boats full of refugees setting off for a better future. 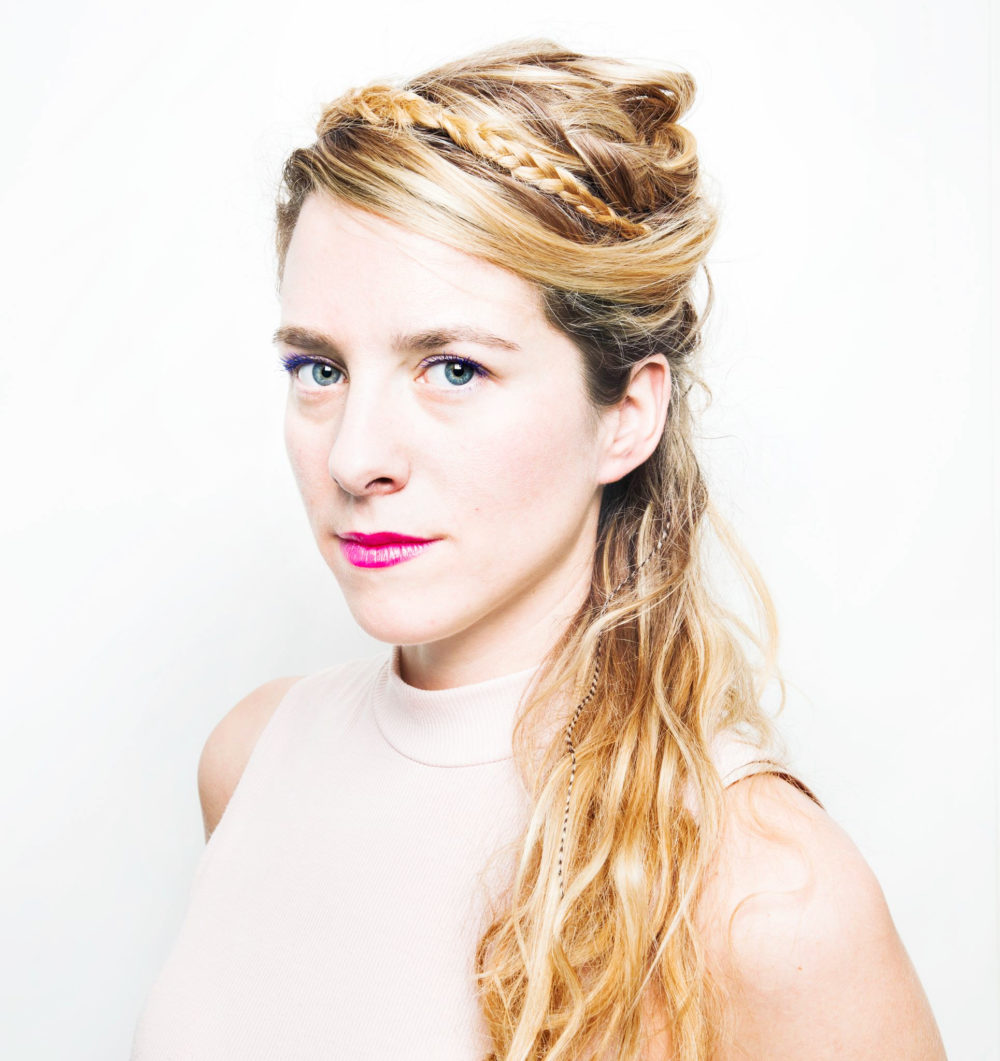 Sanne de Wilde, born in Belgium, 1987, graduated with a Master in the Fine Arts at KASK in Ghent (BE) with great honours in 2012. Her photo series ‘The Dwarf Empire’ was rewarded with the Photo Academy Award 2012 as well as the International Photography Award Emergentes DST in 2013. Her serie ‘Snow White’ was awarded 16ème Prix National Photographie Ouverte and NuWork Award for Photographic Excellence. She was awarded the Nikon Press Award in 2014 and 2016 for most promising young photographer. The British Journal of Photography selected De Wilde as one of ‘the best emerging talents from around the world in 2014’ and she received the Firecracker Grant 2016, PHmuseum Women’s Grant and de Zilveren Camera award for ‘The Island of the Colorblind’. ‘Land of Ibeji’, her newest project with NOOR-member Bénédicte Kurzen, won the World Press Photo Award, Rovinj Photoaward, CAP Prize, Prix Voies OFF and was nominated for the ZEISS photography award in 2019. She has been internationally published (Guardian, New Yorker, National Geographic, Le Monde, CNN, Vogue) and exhibited (Voies OFF, Tribeca Film Festival, Circulations, Lagos Photo, Lodz Fotofestiwal, Cortona On the Move, IDFA, STAM and EYE). Since 2013, De Wilde works with the Dutch newspaper and magazine De Volkskrant, in Amsterdam the Netherlands, and joined NOOR in 2017. Sanne de Wilde is represented by East Wing Gallery (Doha, Qatar).