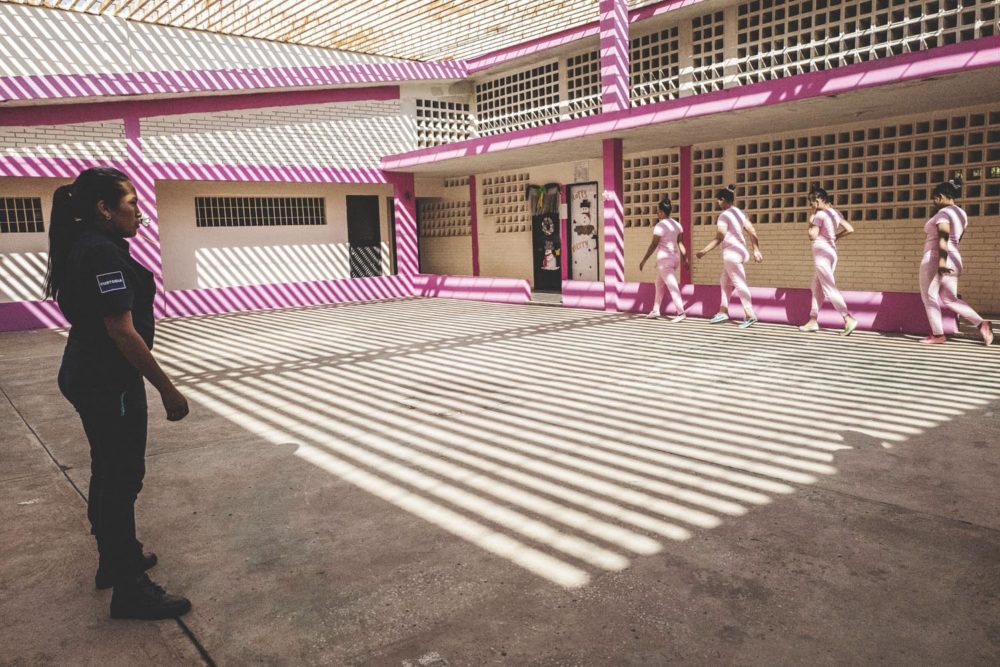 Female prisoners warm up before exercising at the Ana María Campos II state prison. Only detainees who have already been sentenced end up at this type of prison. These facilities are not overcrowded; they have enough food, water and medical supplies. Prisoners receive schooling, exercise and cook. They are not allowed to make or receive telephone calls. Visits are allowed once a month. 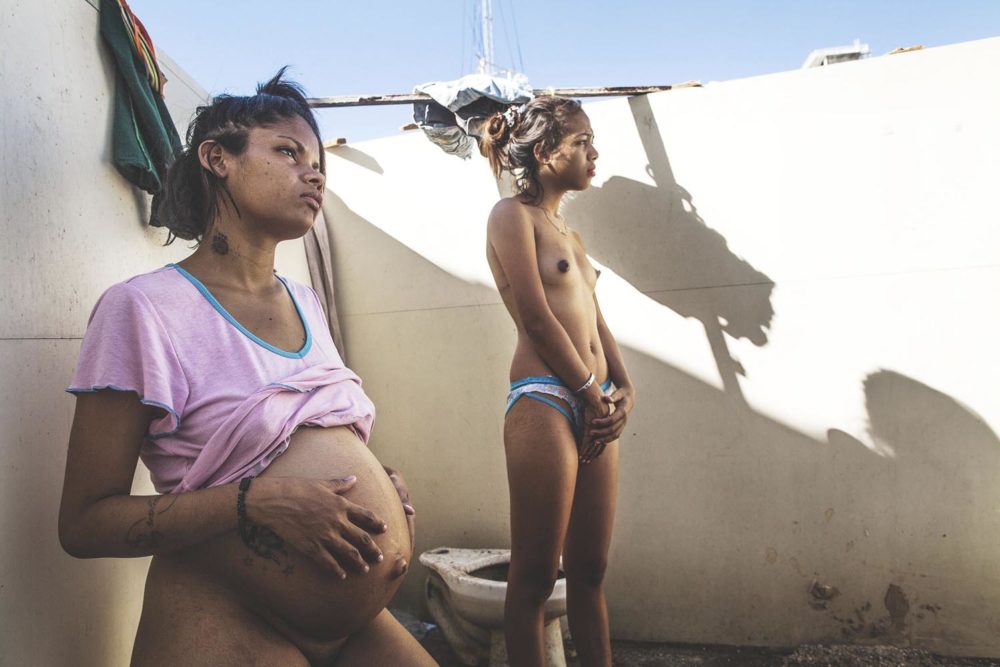 Jakelin Rivero, 21 years old and eight months pregnant, has been charged with robbery. She is waiting to wash in a makeshift outdoor bathroom. Around 100 prisoners use the same toilet bowl and shower in the same place. 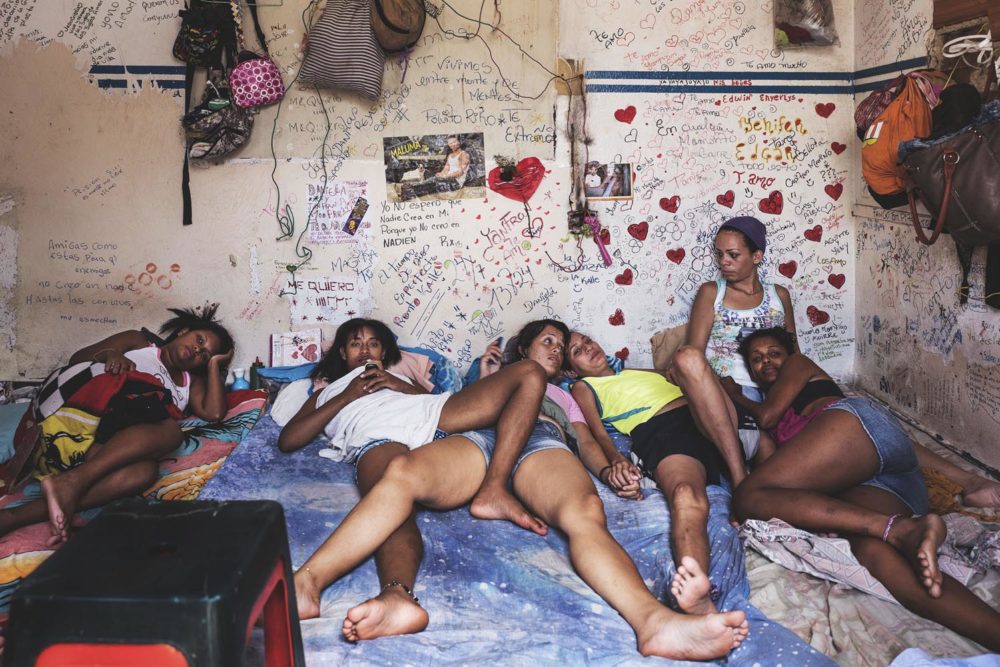 This room is the former investigation office at the local police station. It has had to be repurposed as a holding cell in order to separate female prisoners from males. “Eternal days” is what one prisoner calls the time she must spend in this building instead of a state prison. Most of these women have children who do not visit. Daniela (centre, in the pink shirt) is serving a four-year sentence for robbery. Her daughter has leukaemia. 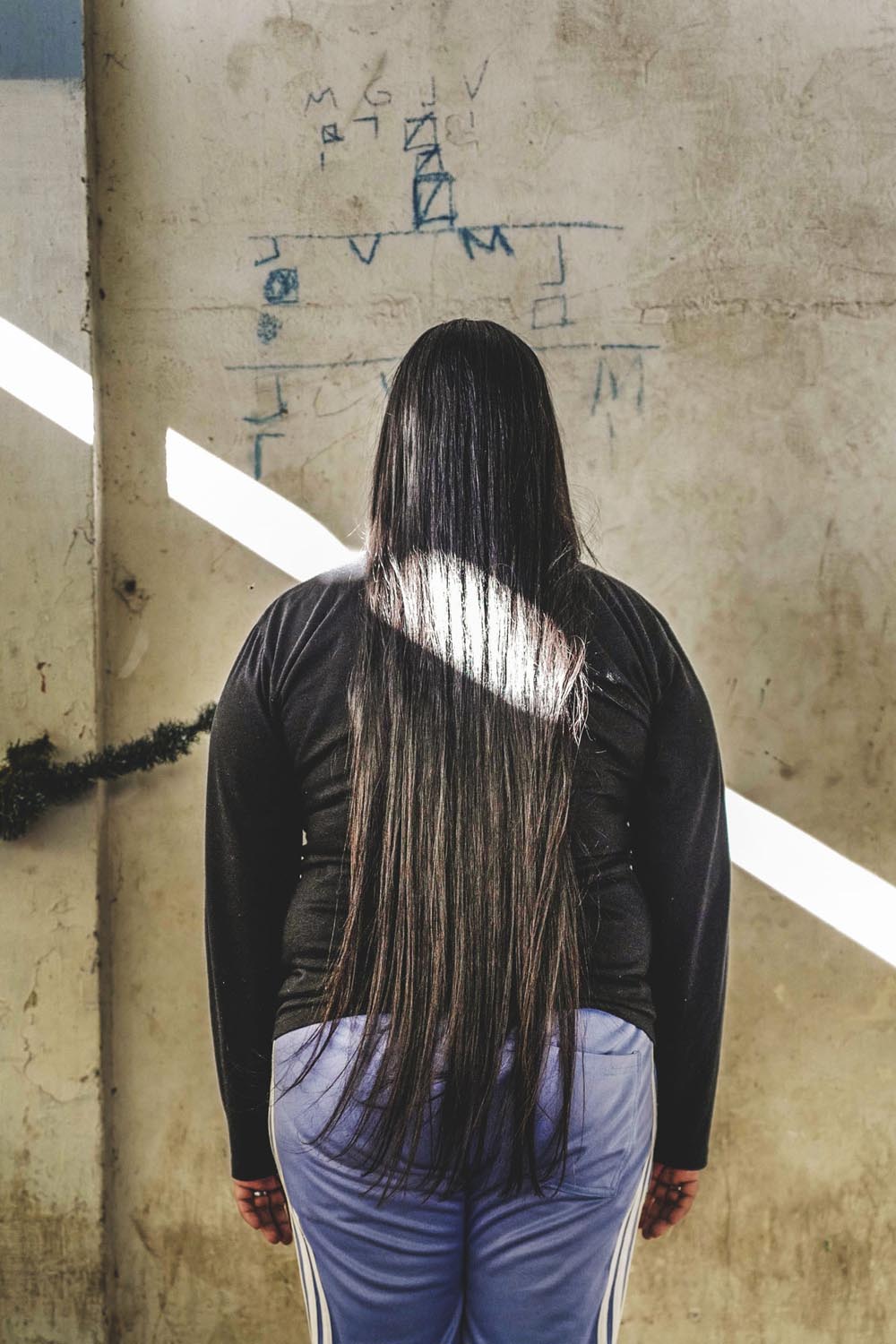 Carolina, 28, an incarcerated police officer, shows her long hair. She was sentenced to 13 years’ imprisonment for her involvement in a theft. She has been waiting for seven years and nine months to be transferred to a state prison. 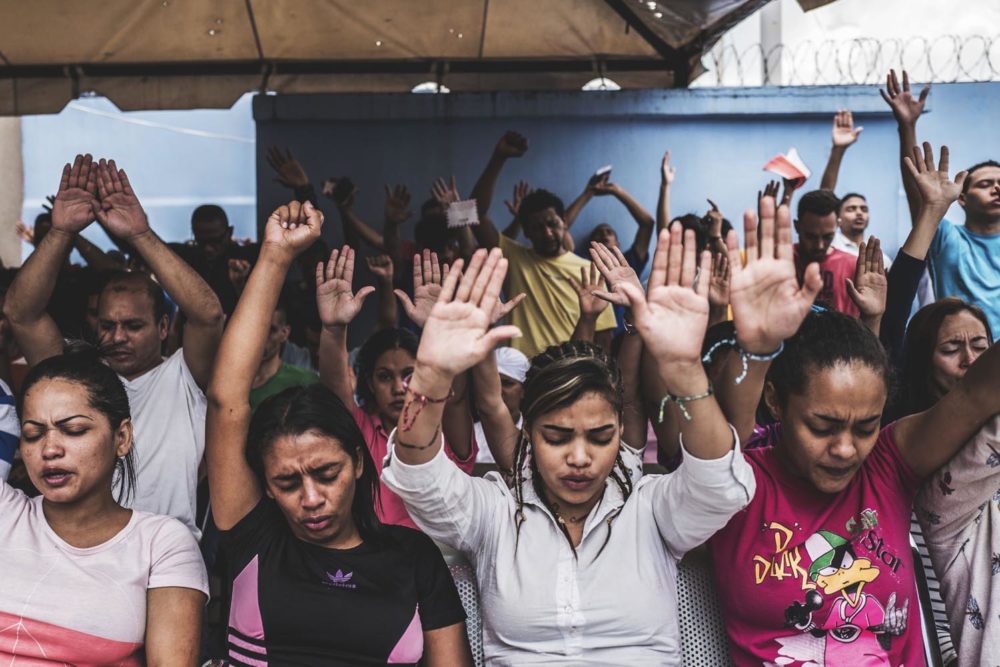 Male and female prisoners at a religious service. The charismatic preacher speaks of forgiveness and self-reflection. Afterwards, there will be a religious theatre performance and a shared meal. 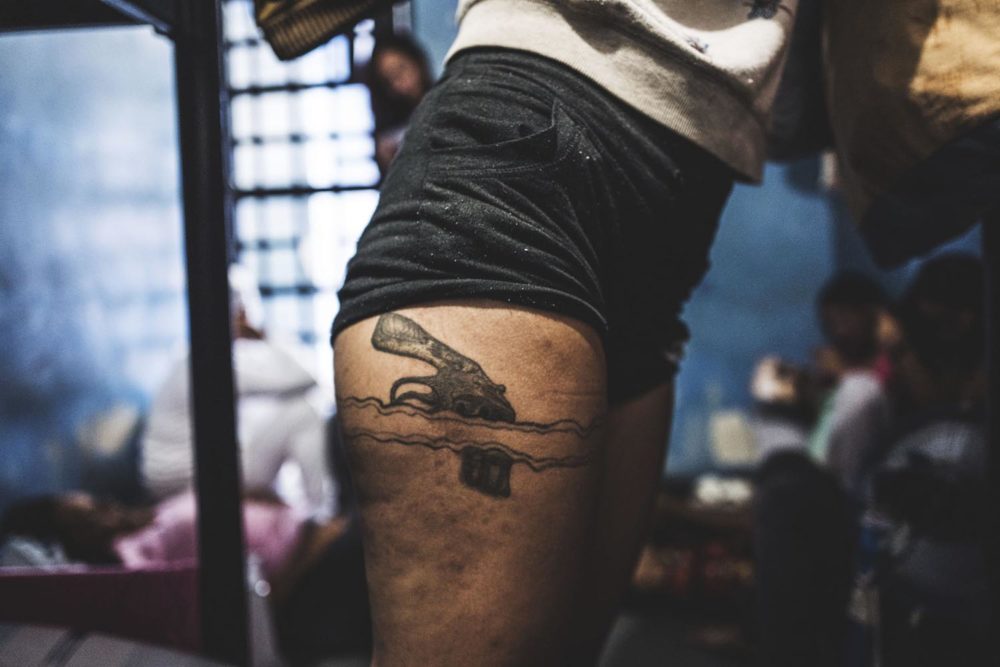 La Yaguara detention centre, Caracas: 17-year-old Hainni has been accused of murder. She is also called “38”, the calibre of the gun tattooed on her leg. 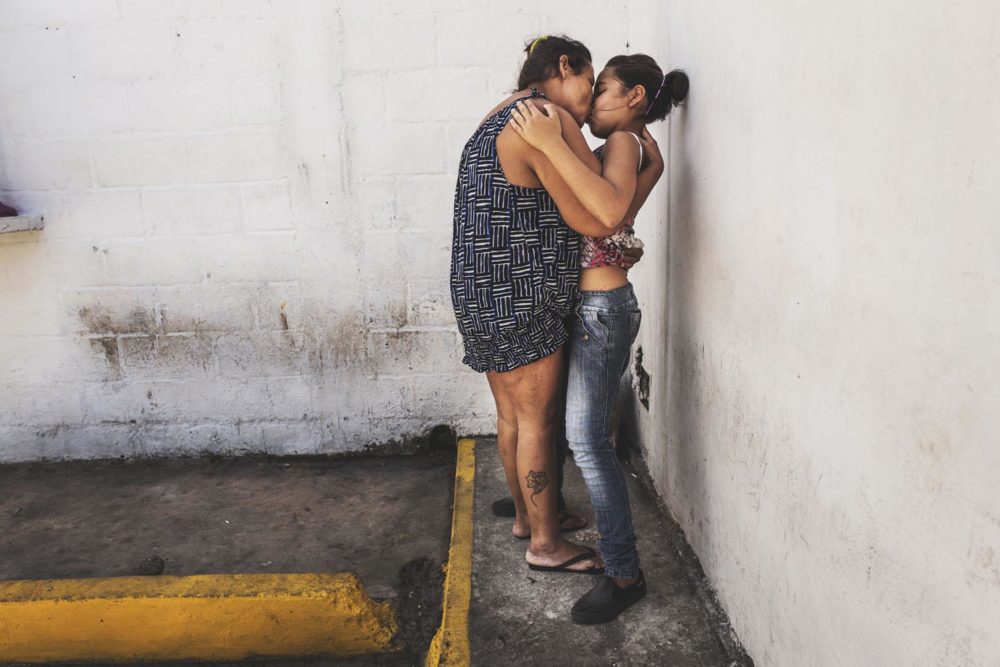 María (left) kisses her daughter during visiting hours. María is 35 years old and has been charged with robbery. She goes to therapy three times a week. Although court proceedings have been delayed several times, the situation of these women in the district of Valencia, a city in the north of the country, improved slightly from 2017 to 2018. Mobile phones are allowed, as are hairdressing tools and a three-hour recreation period outside the cells. 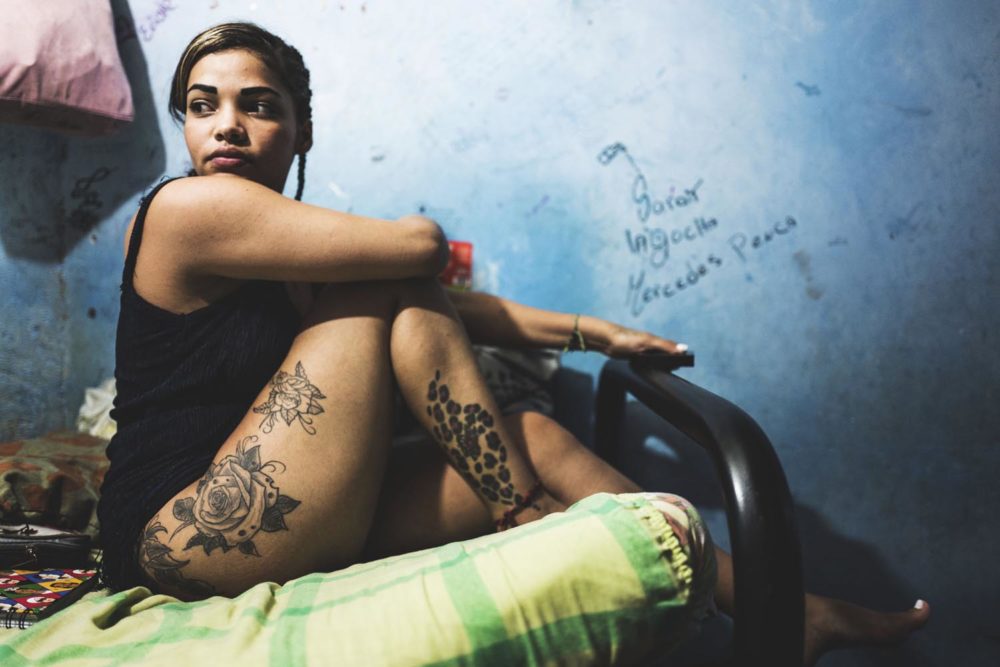 Sarait Rivas, 20, has been in custody for 45 days. She is awaiting trial without having been given the name of a lawyer. She has been charged with terrorism and corruption. She was arrested while looting a liquor store in a slum of Caracas. She is the mother of two children. 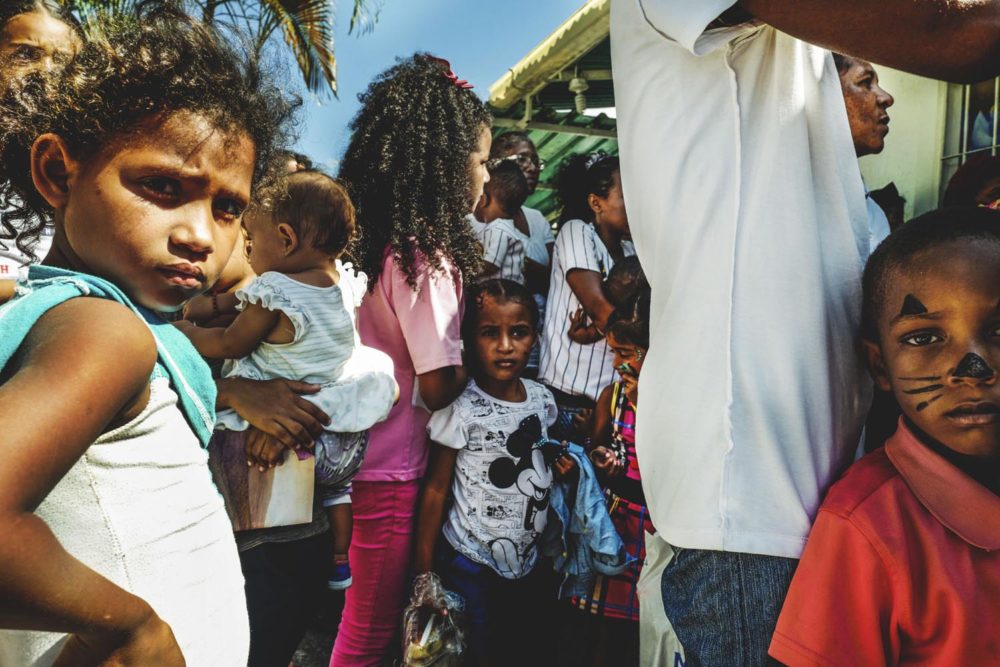 At this remand centre in Guatire, prisoners’ children wait for a Christian theatre performance to begin. 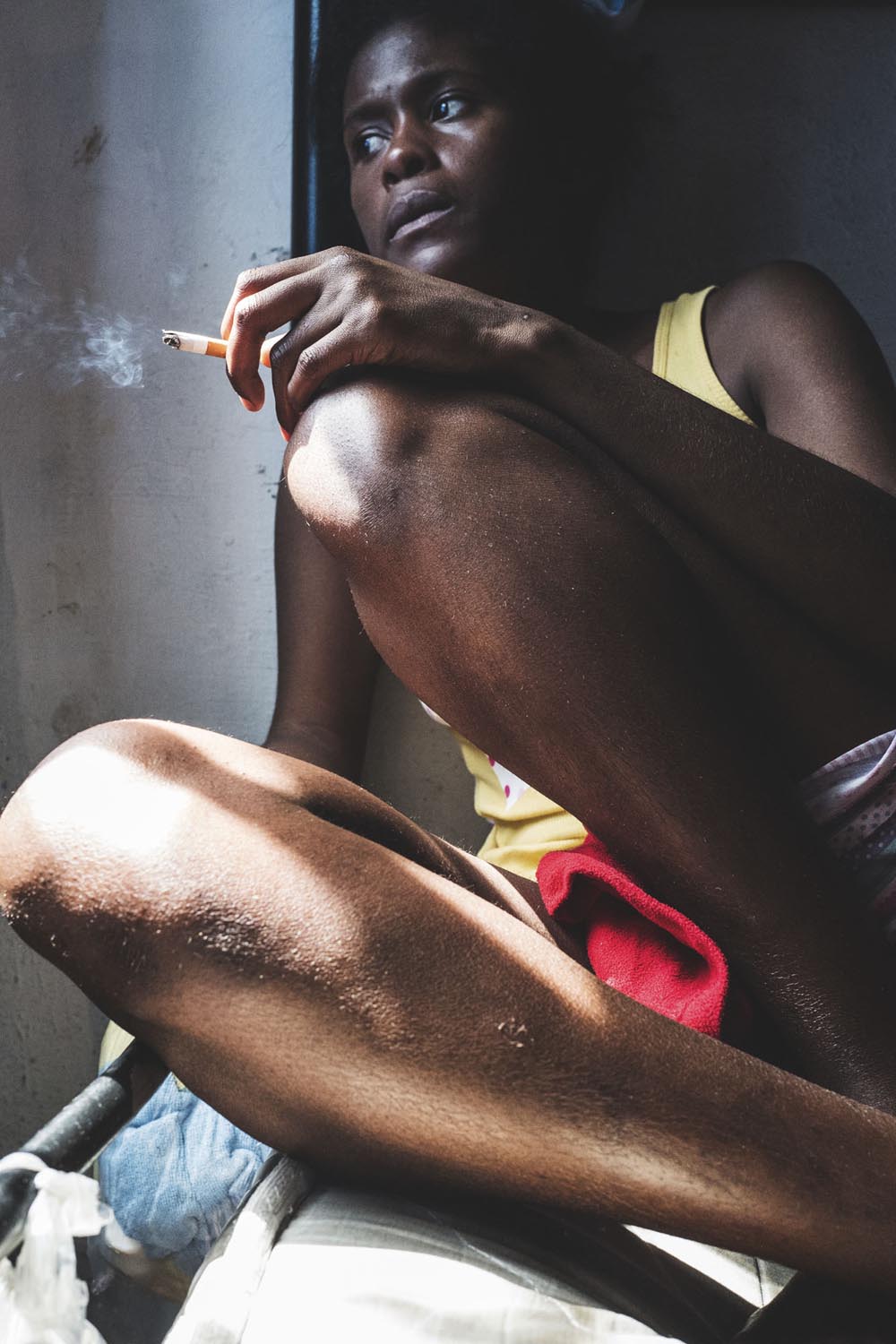 Yarimar Tovar smokes a cigarette on her bed at La Yaguara prison in Caracas. She is 25 years old and has been accused of robbery. She is the mother of three children; they are seven, five and two-and-a-half years old. Yarimar shares her cell with six other women. 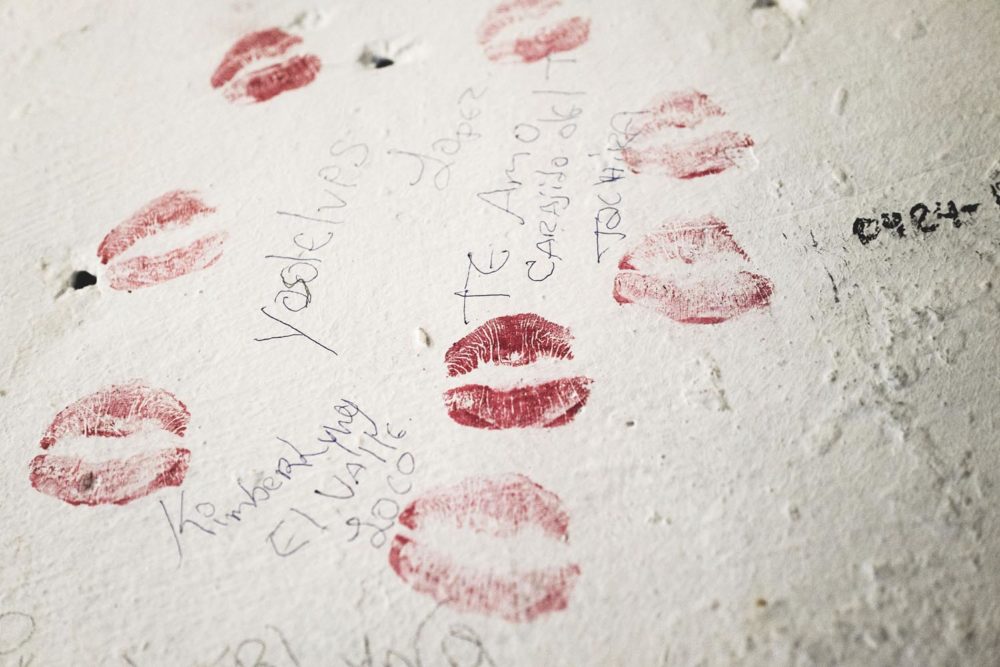 Lip prints in red lipstick and hand-written messages on the walls of La Yaguara prison. 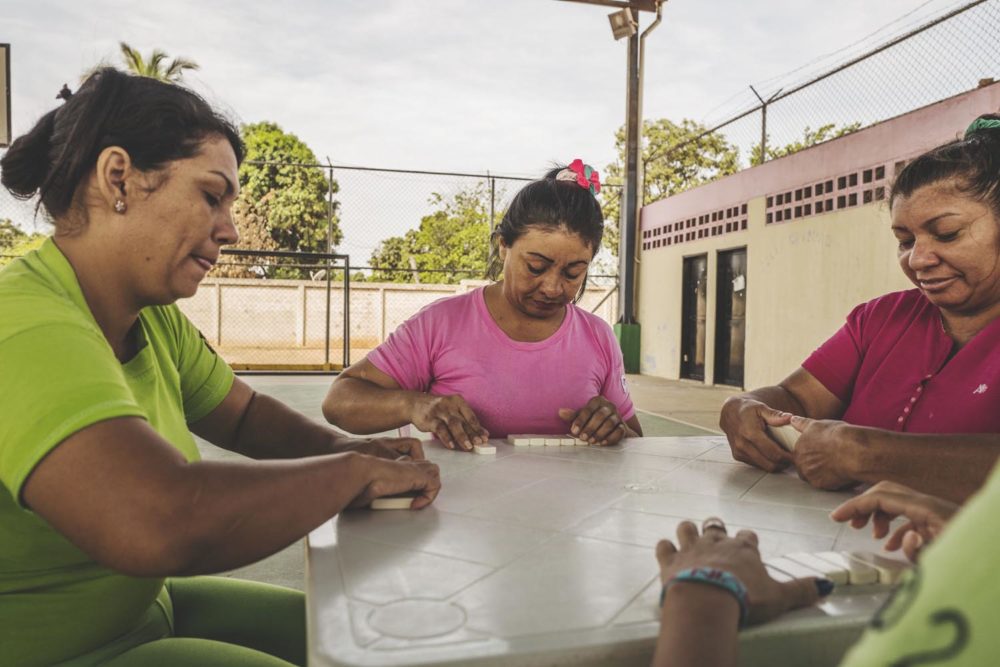 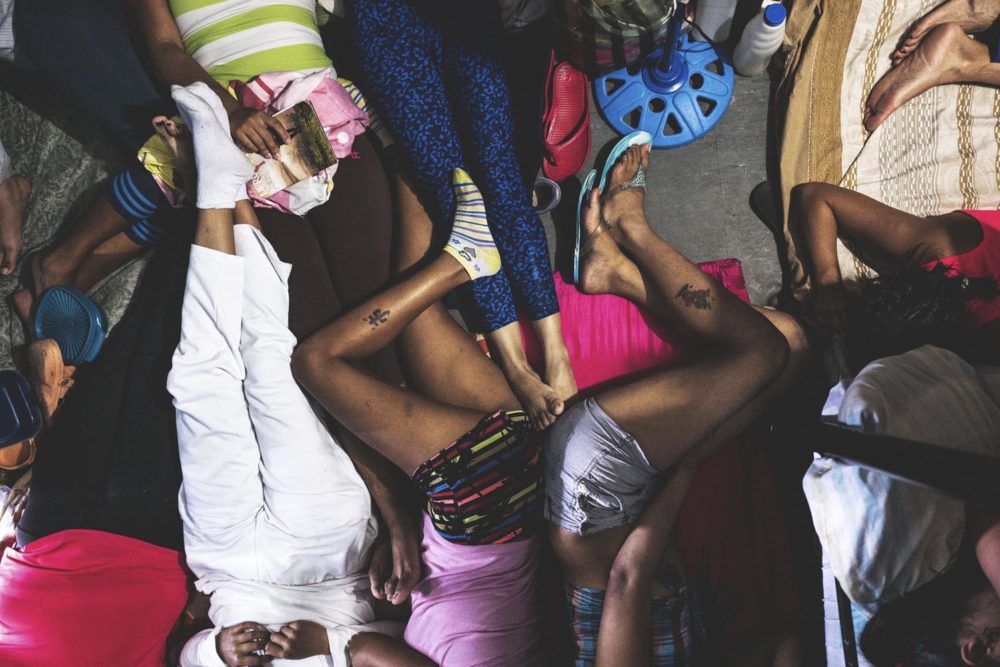 22 female prisoners, including two minors, have been awaiting trial for months or even years at the La Yaguara remand centre. They share a tiny cell and sleep on mattresses on the floor. Some do not have legal assistance. 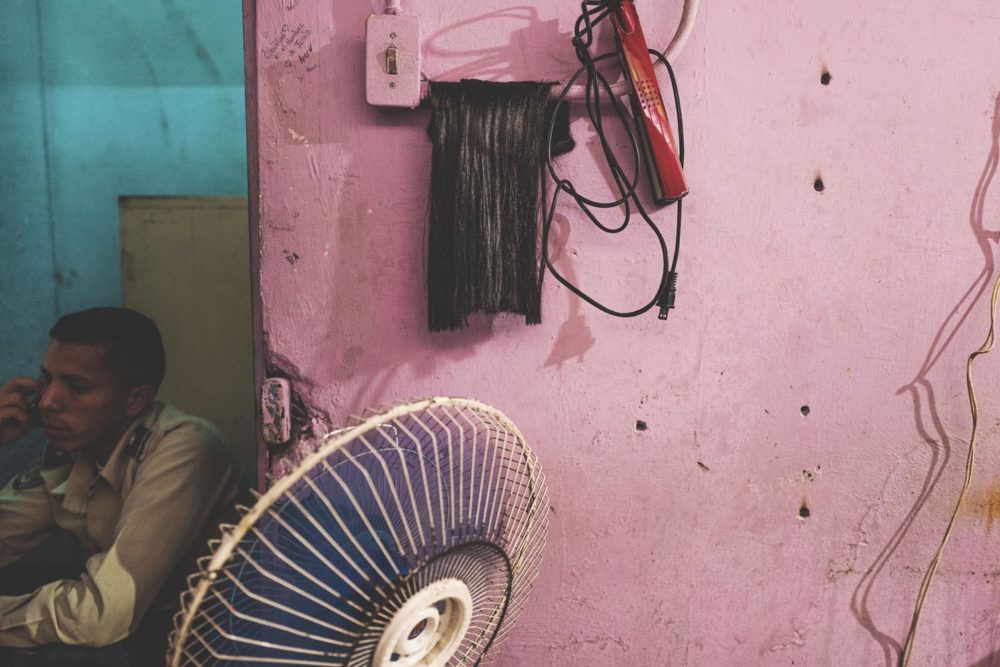 These women get make-up, barrettes, hair extensions and mobile phones from the police. 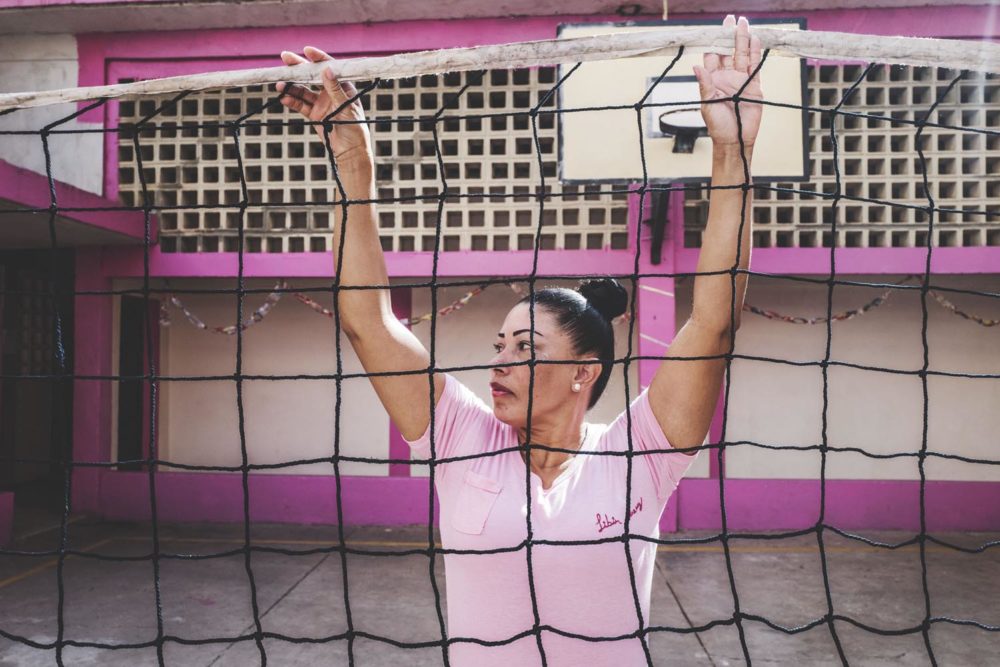 A woman hangs a volleyball net in a “closed” prison in Maracaibo, a border town between Venezuela and Colombia. At this prison, exercise is part of the daily routine, as are education, motivational workshops and crafts. The aim of these centres is to resocialise the women and avoid recidivism. They can get time off for good behaviour. 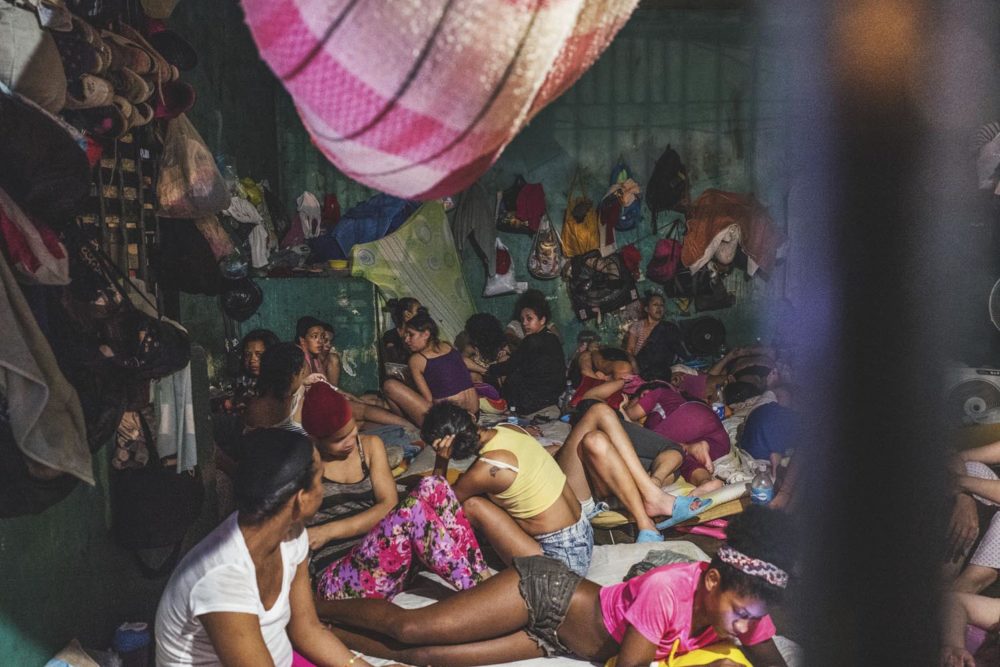 “Chinatown” is divided into two sectors. In this sector, there is no daylight; it is home to 58 women. “This situation doesn’t help anyone. When we get out, we’ll be worse people than before”, says Ayarí, a 33-year-old prisoner. 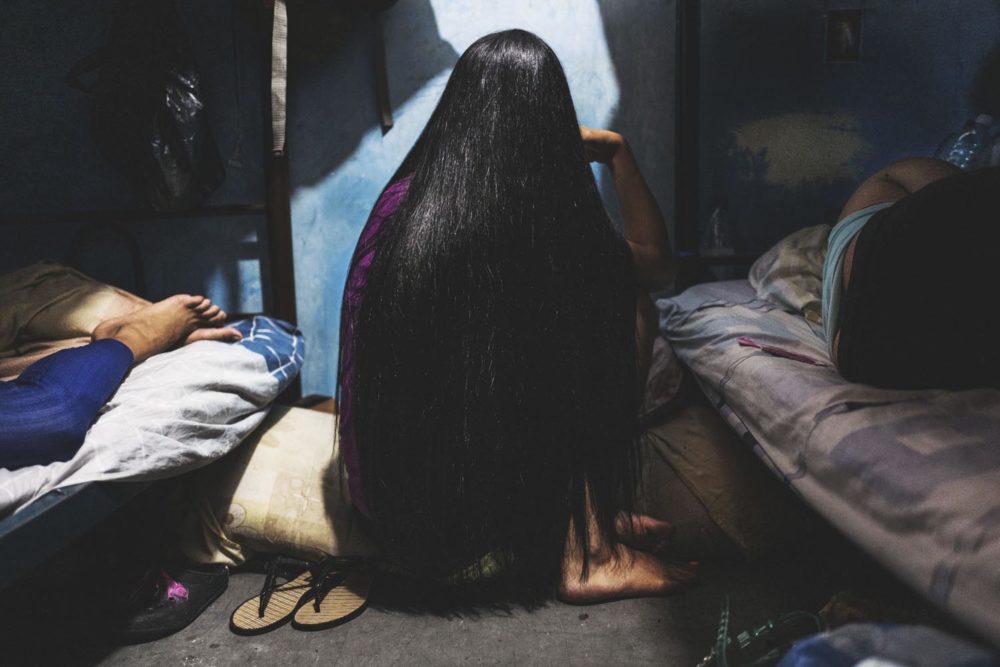 Beauty has always been important in Venezuelan culture. In remand, the women tend to their appearance although there is no mirror and no one visits.

In Venezuela, economic distress as well as violence and crime – which are deep-rooted in society – culminate in remand centres. Thousands of women awaiting trial can be separated from their families and children for years. “When we get out, we’ll be worse than before we went to prison”, says 21-year-old Yorkelis. Her home: “Chinatown”, a prison with one cell overcrowded with 60 women. Pretrial detention is particularly brutal. Prisoners do not have enough to eat; there is no water and there are no medical supplies. Petty criminals are not separated from serious offenders. Many prisoners are mentally ill and addicted to drugs. The Law Against Hate, which was passed in 2018, forbids anti-government protests and has put many women behind bars. Ana María Arévalo Gosen visited current and former prisoners to examine what this type of preventive detention says about conditions in Venezuelan society.

Believe in the power of the story. When I started to pursue “Dias eternos”, I showed it to different outlets. Their answer was: “We have seen enough prisons stories.” Despite many drawbacks, I believed in this story and engaged on a “print sale” crowdfunding to produce more work. With that, I won two grants that allowed me to complete my vision of the story.

The first detained woman I met was 27 years old, seven months pregnant and hospitalised. She presented infections and loss of placenta. Female and male detainees were mixed in the centre of detention where she was held. This is how she became pregnant. After that day, I felt ashamed that so many Venezuelans are disconnected from this issue. So many of their human rights are violated. They are serving an anticipated conviction, regardless the crime committed or their culpability. They are forced to wait for a process that could last years. That is why I decided to work on the conditions of the women in pretrial detention. It is a body of work that gives evidence to one of the root causes of the crisis in Venezuela.

This pandemic is teaching us lessons. Due to travel restrictions, the value of local photographers and the high quality of their work is gaining more importance. Meanwhile, social media has enabled our community to produce a positive impact beyond our work. We are gathering funds, teaching online, creating platforms and collectives from our homes. The future of visual journalism will be a mix of both behaviours. Local visual storytellers working to produce powerful transmedia stories. The goal will be to have an impact. We will work not only for global audiences, but also for our own communities. 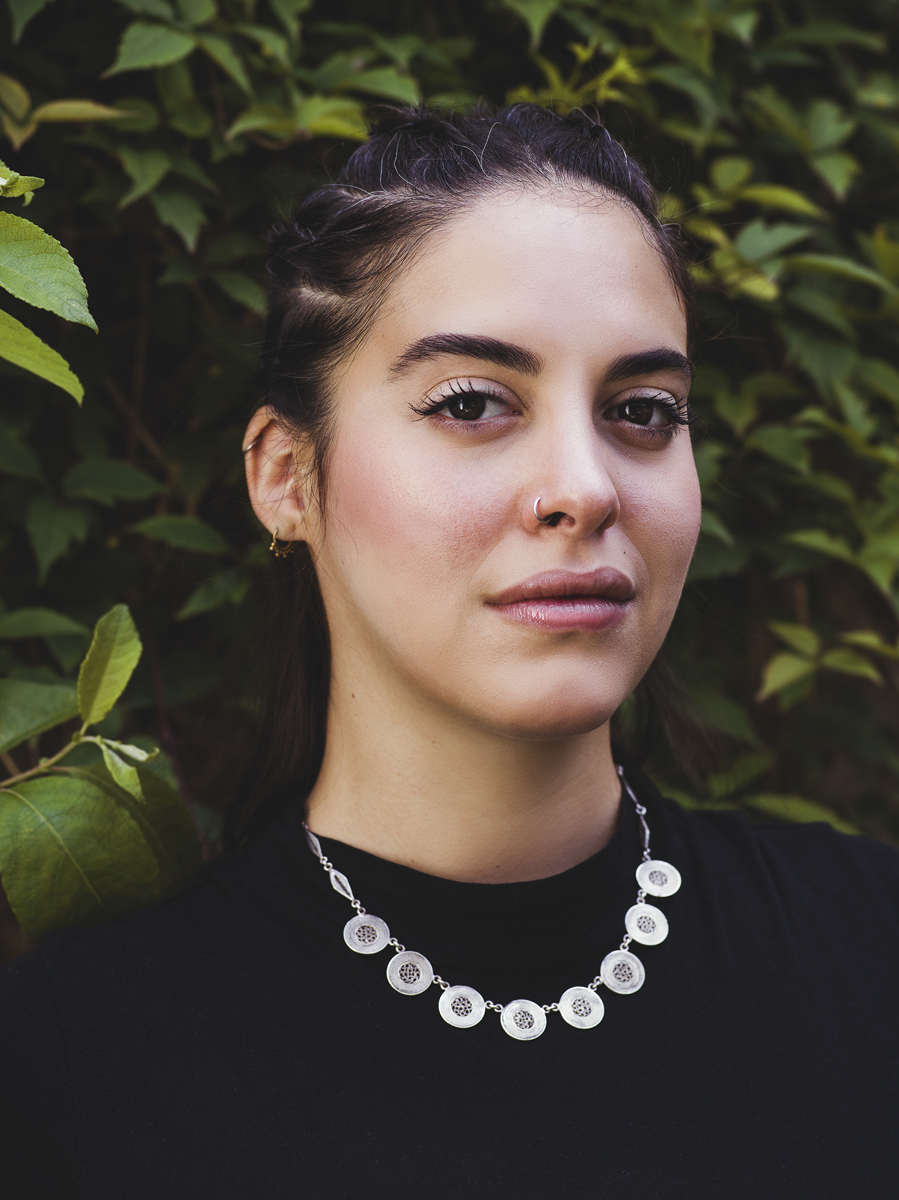 *1 November 1988 in Caracas, Venezuela
In 2009, Ana María Arévalo Gosen moved to France. She studied photography at the ETPA in Toulouse and worked as a freelancer in Hamburg. Since her return to Venezuela in 2017, she has been documenting the crisis in her country, particularly from the perspective of women. She received the 2018 Women Photograph Grant, was a nominee for the Joop Swart Masterclass in 2019 and, in the same year, won the POY Latam Prize for South American Documentary Photography for her project about a Venezuelan women’s prison. 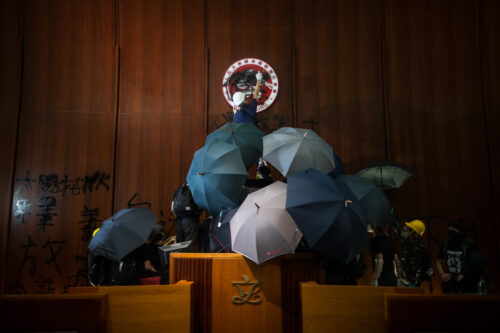 Eric Tsang
Language of the Unheard 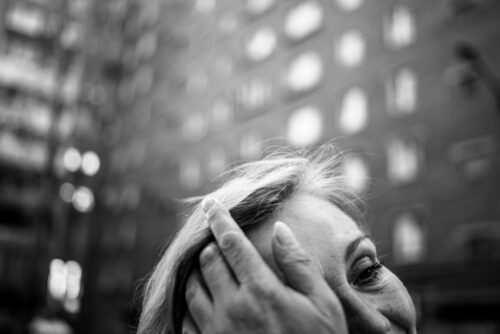