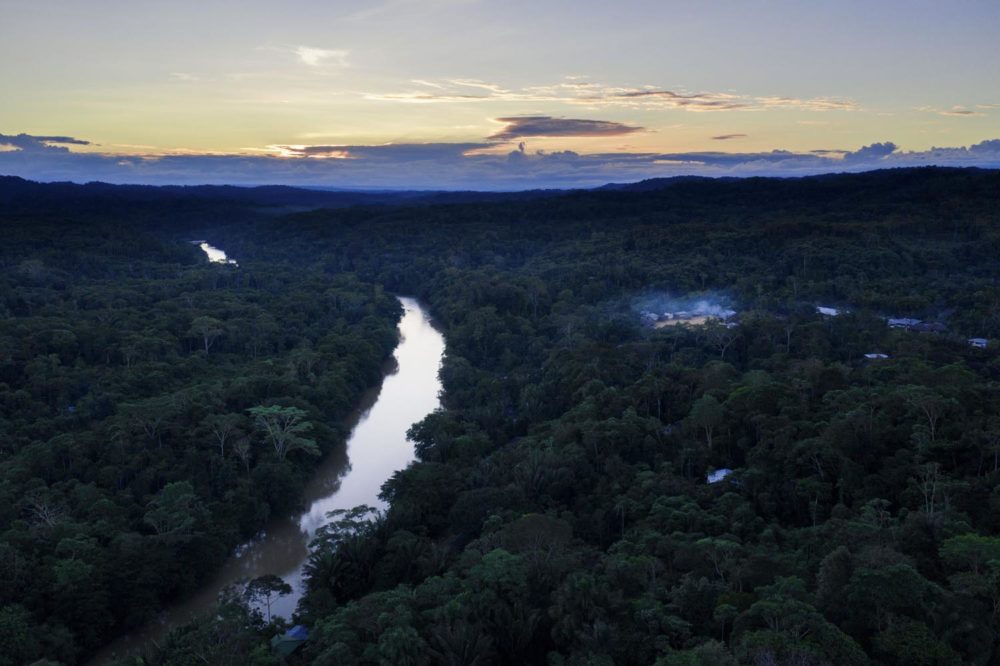 Aerial shot of the Río Bobonaza and the main square in Sarayaku at sunset. 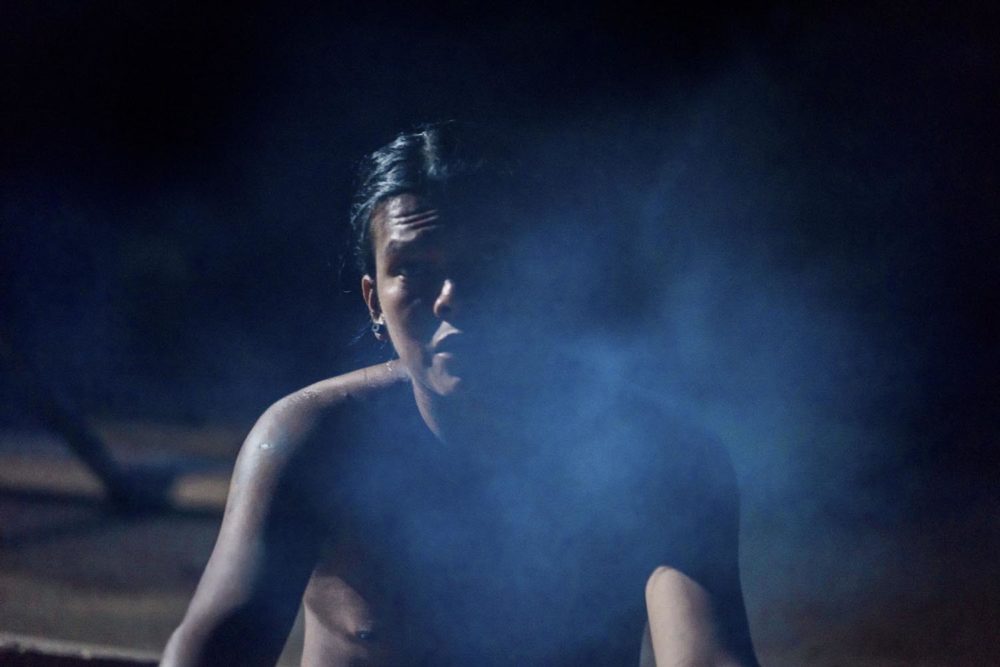 José Miguel Santi sits by the fire in his mother’s kitchen. Fire is essential to her routine. It is used not only to cook and smoke food, but also as a source of heat on rainy days. 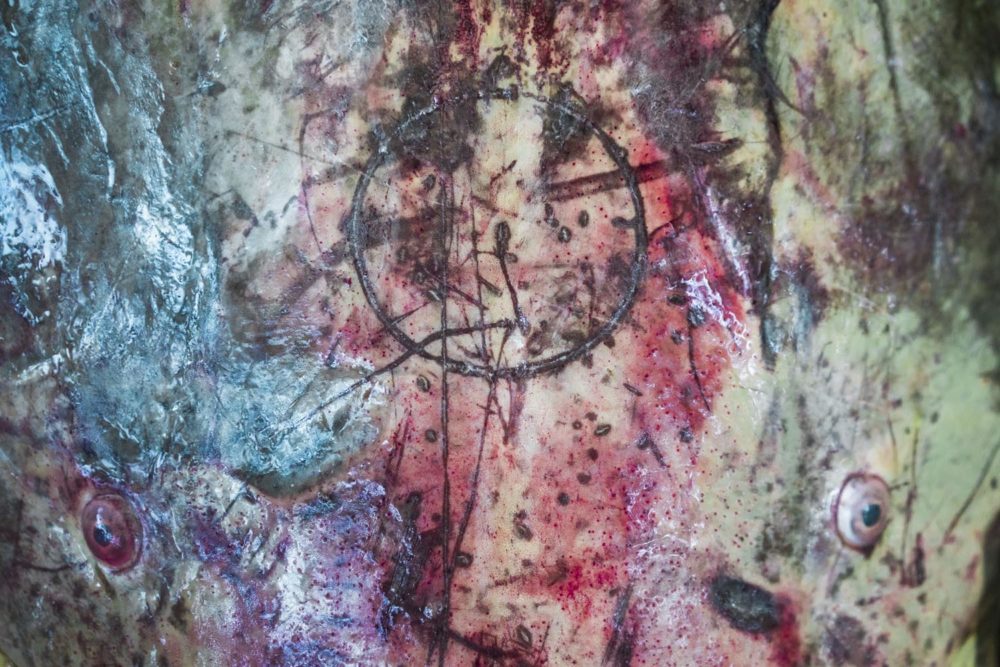 An enormous catfish bears the marks of the harpoons used to catch it. In the Amazon jungle, these fish can grow to be as large as a human adult. The catfish is the most common fish in Ecuador’s Amazon region; this is why it is so often eaten by the indigenous people. 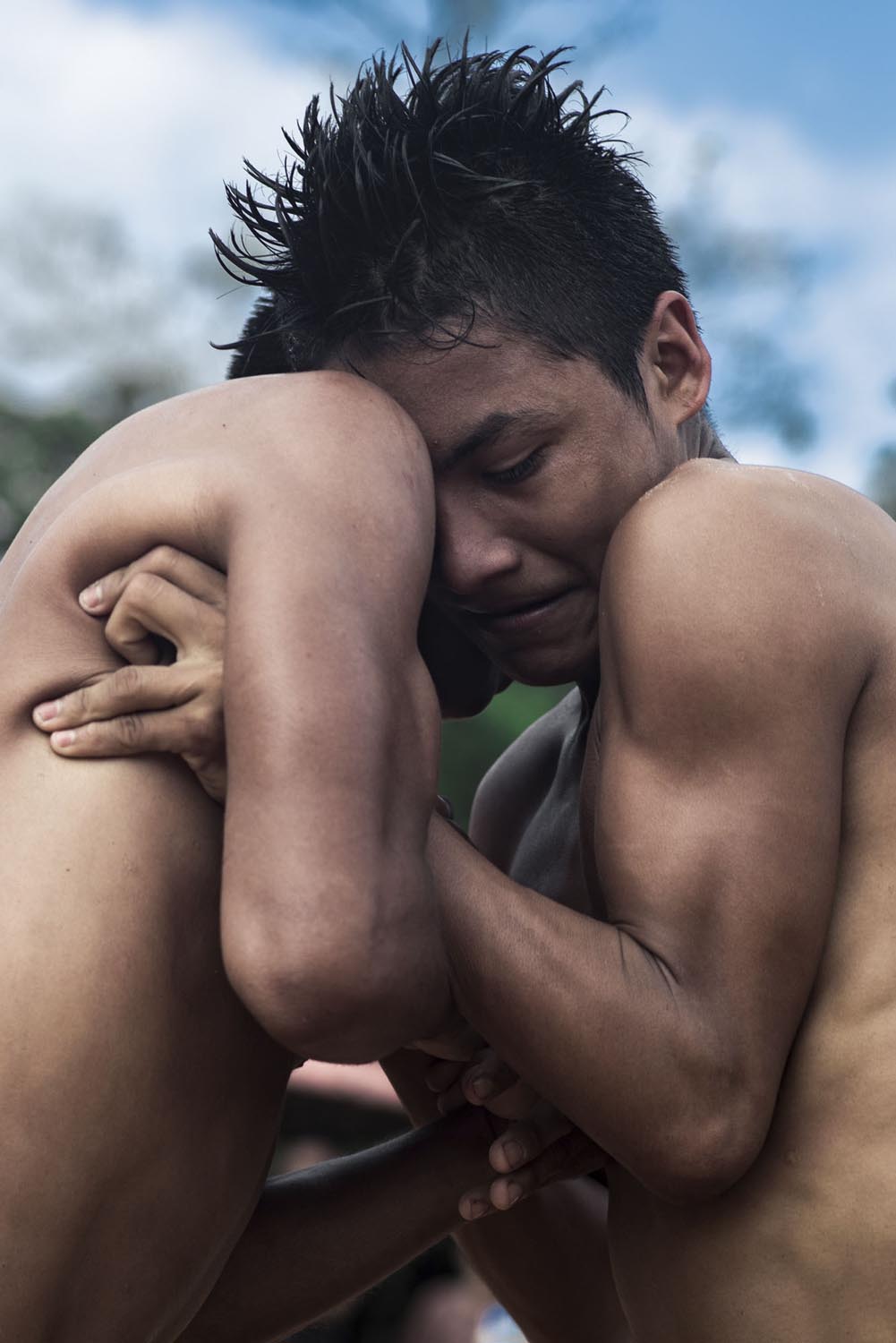 Javier Cisneros fights on the community’s main square. This fight is taking place as part of the celebrations in honour of Pachamama, the personification of Mother Earth. 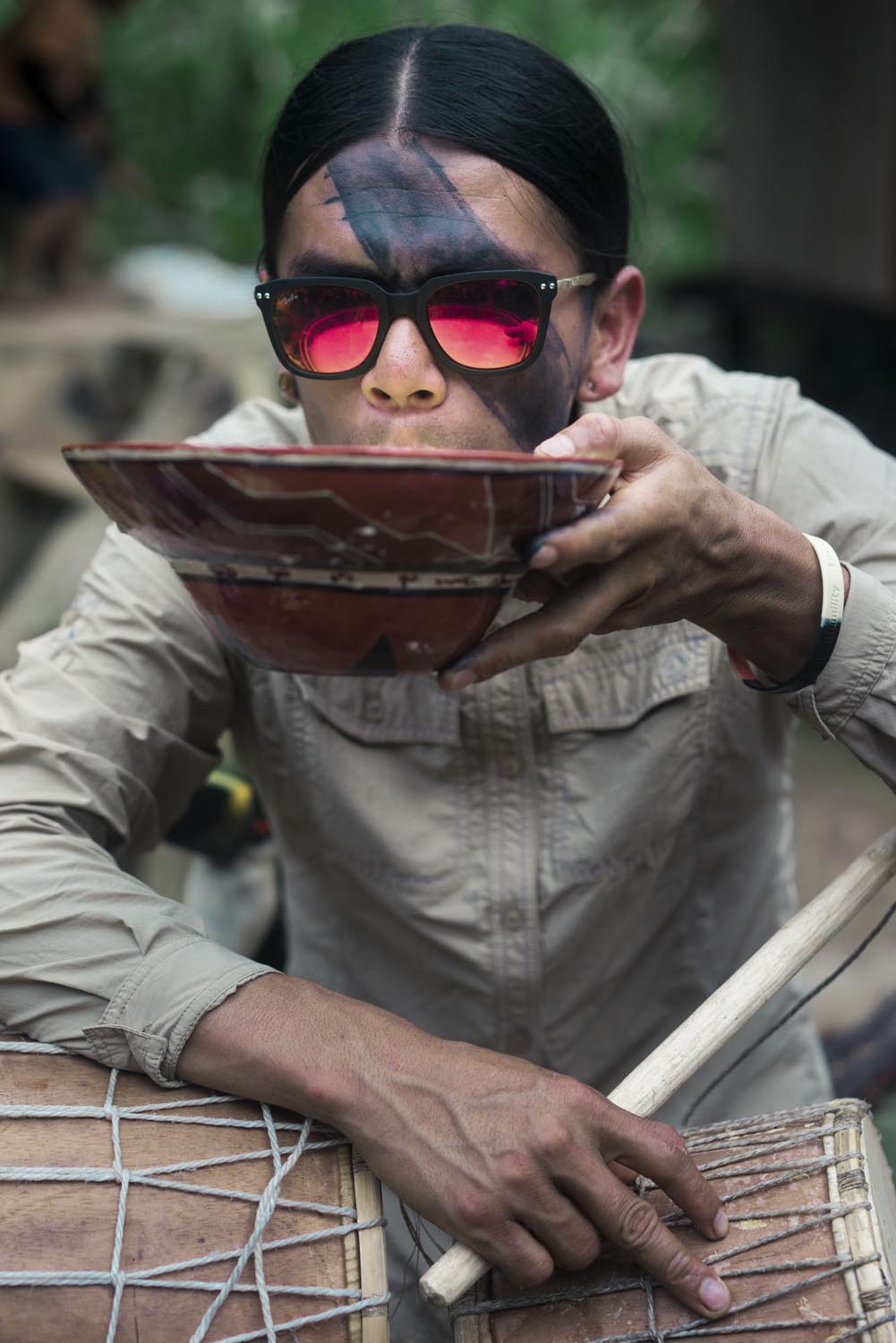 Celso Aranda drinks chicha, a traditional beverage prepared from manioc, on the third day of the Uyantza Raymi festival. To prepare chicha, the root must be boiled for several hours before being pressed into a type of purée. The resulting mass is chewed, spit out and finally poured into leaf-covered clay pots for fermentation. This drink, known as “spit beer”, is prepared exclusively by women. 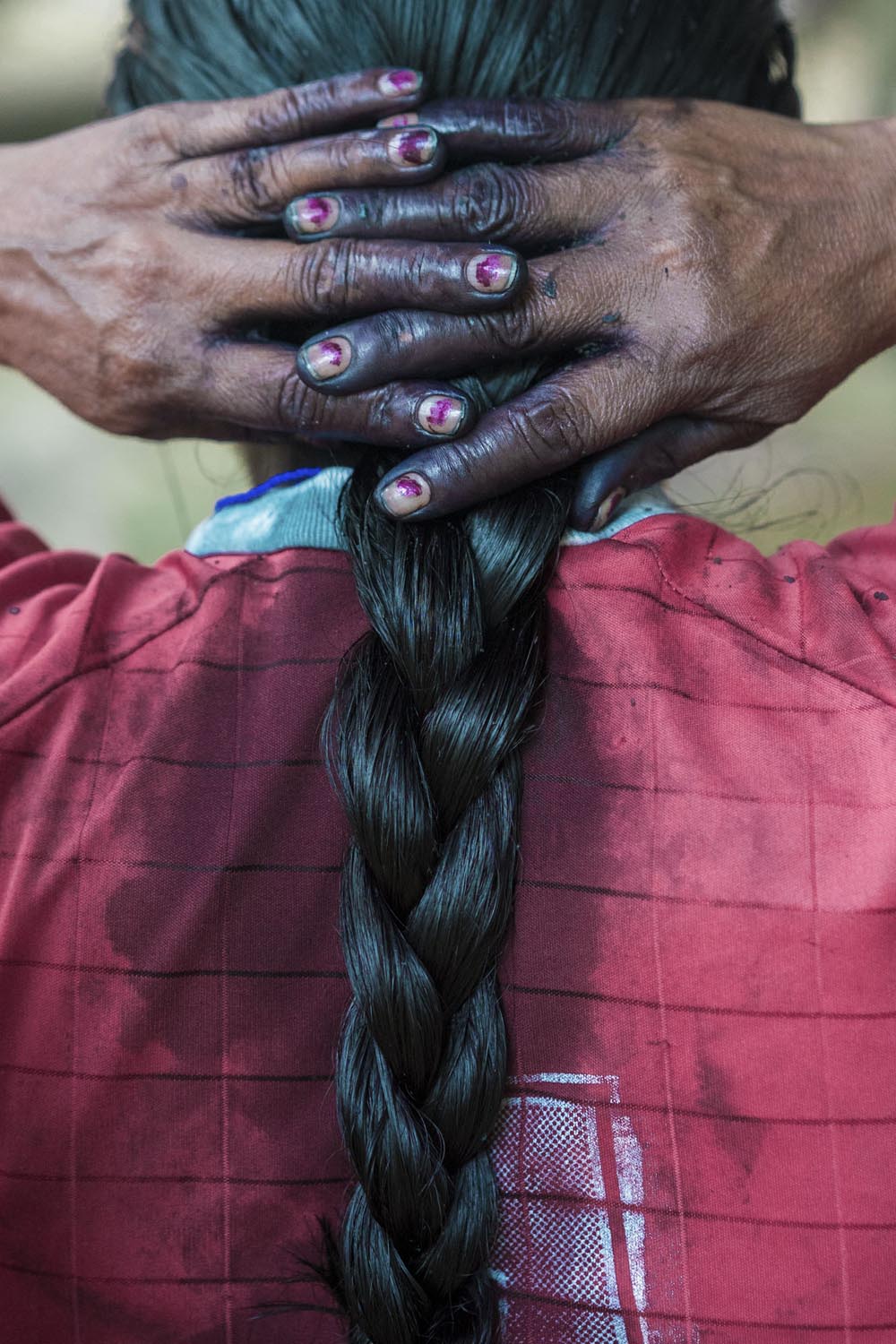 Magdalena Santi spreads wituk through her hair. Wituk is a dark ink made from an Amazonian fruit of the same name. The pigment will stay in a person’s hair for as long as two weeks. Applying wituk is one of the most important Sarayaku traditions. 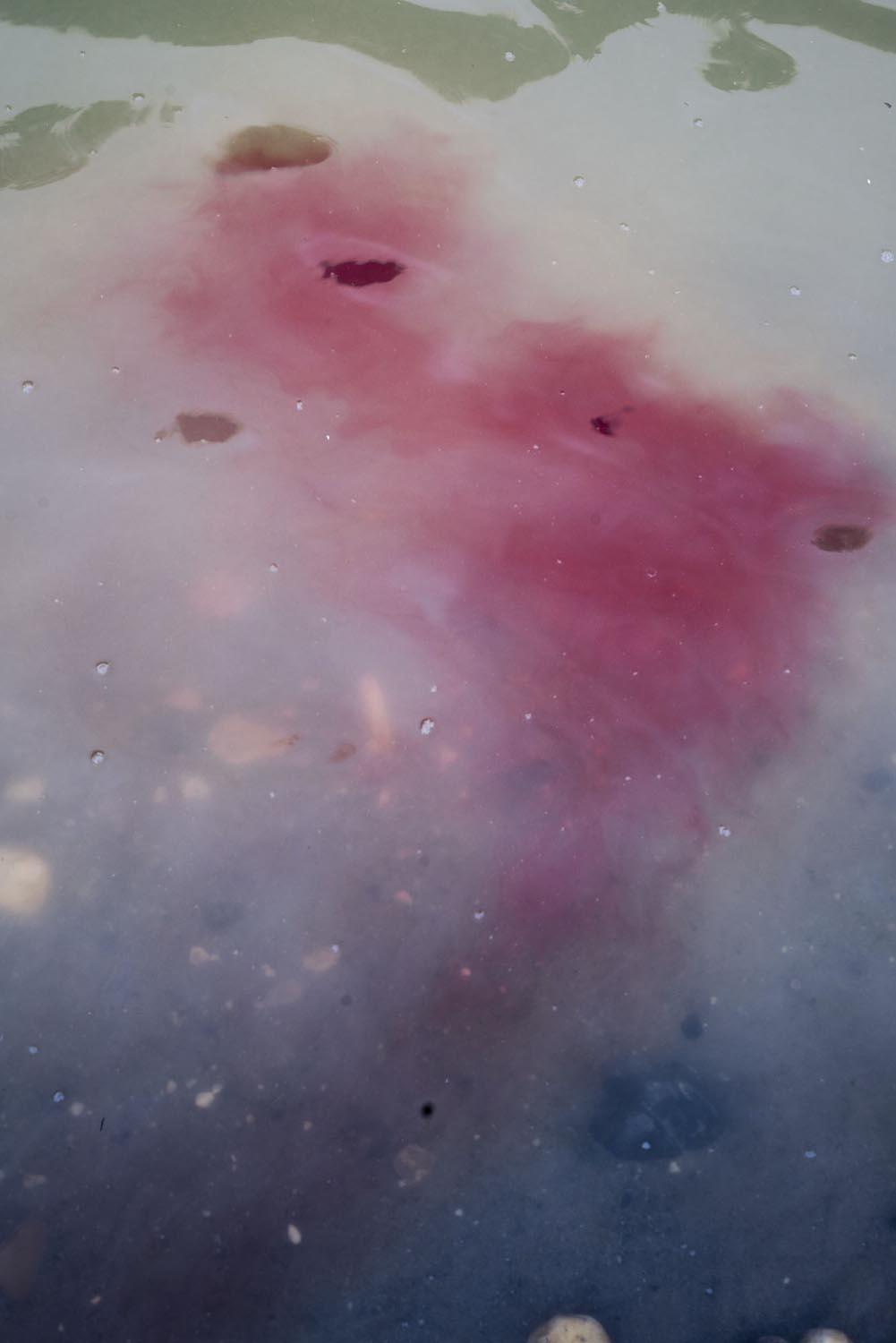 Catfish blood in the Río Bobonaza. Before important celebrations, the men organise a fishing expedition during which they use barbasco, a milky substance derived from the root of the eponymous poisonous plant. In water, barbasco reduces the amount of oxygen, which confuses the fish and causes them to swim to the surface. The fishermen then harpoon them. Barbasco has a short-lived effect; the uncaught fish soon recover. 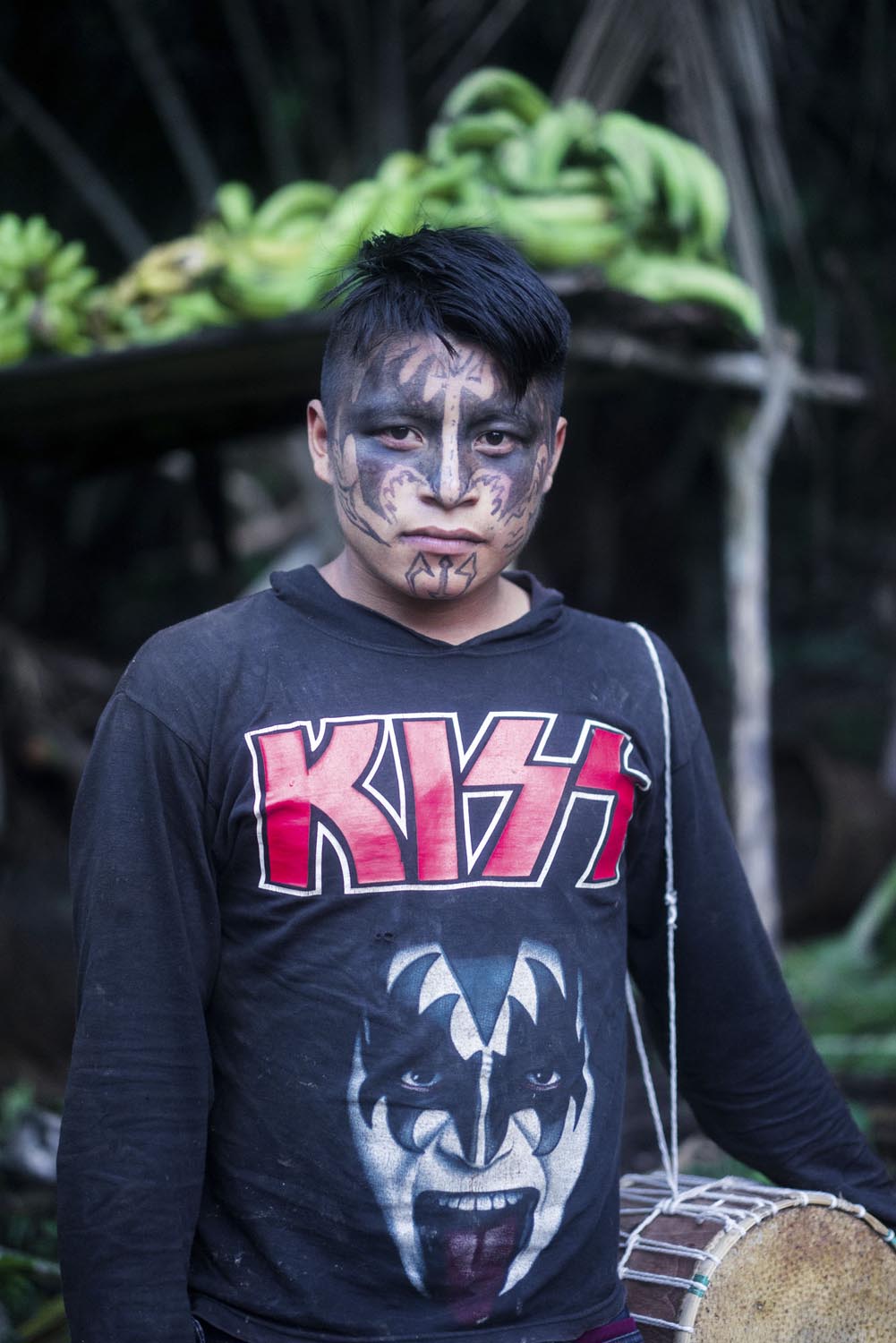 A portrait of Lino Gualinga on the first day of the Uyantza Raymi festival. On special occasions, members of the tribe paint their faces, hands and hair with wituk, a dark ink from the eponymous Amazonian fruit. Lino’s face painting was inspired by pictures of the rock band Kiss. 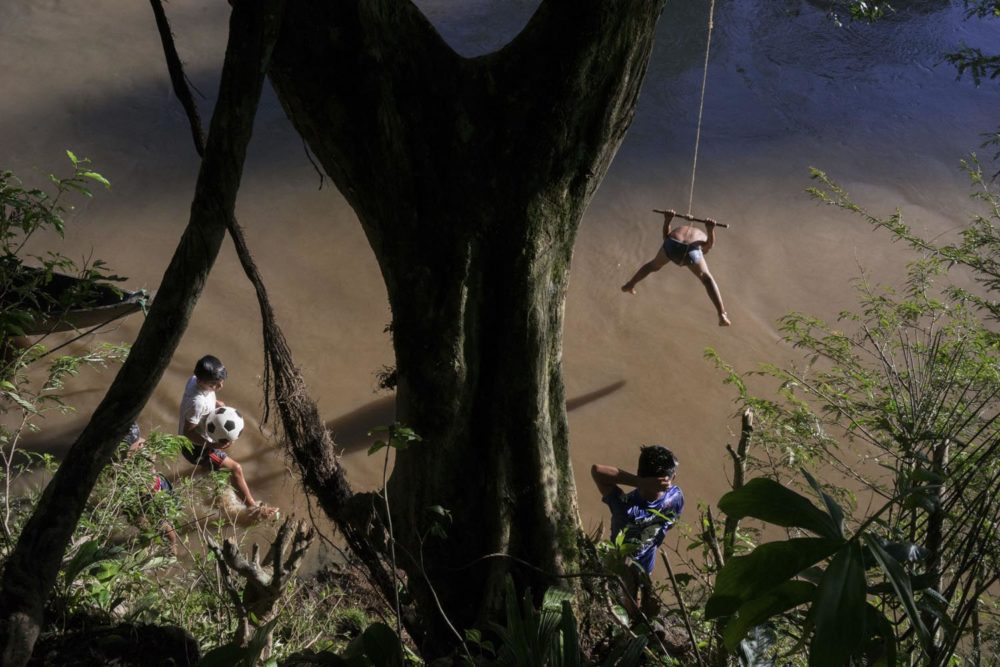 Children play in the Río Bobonaza. This river connects the indigenous community with Puyo, the nearest city, which can be reached by motorboat in around five hours. 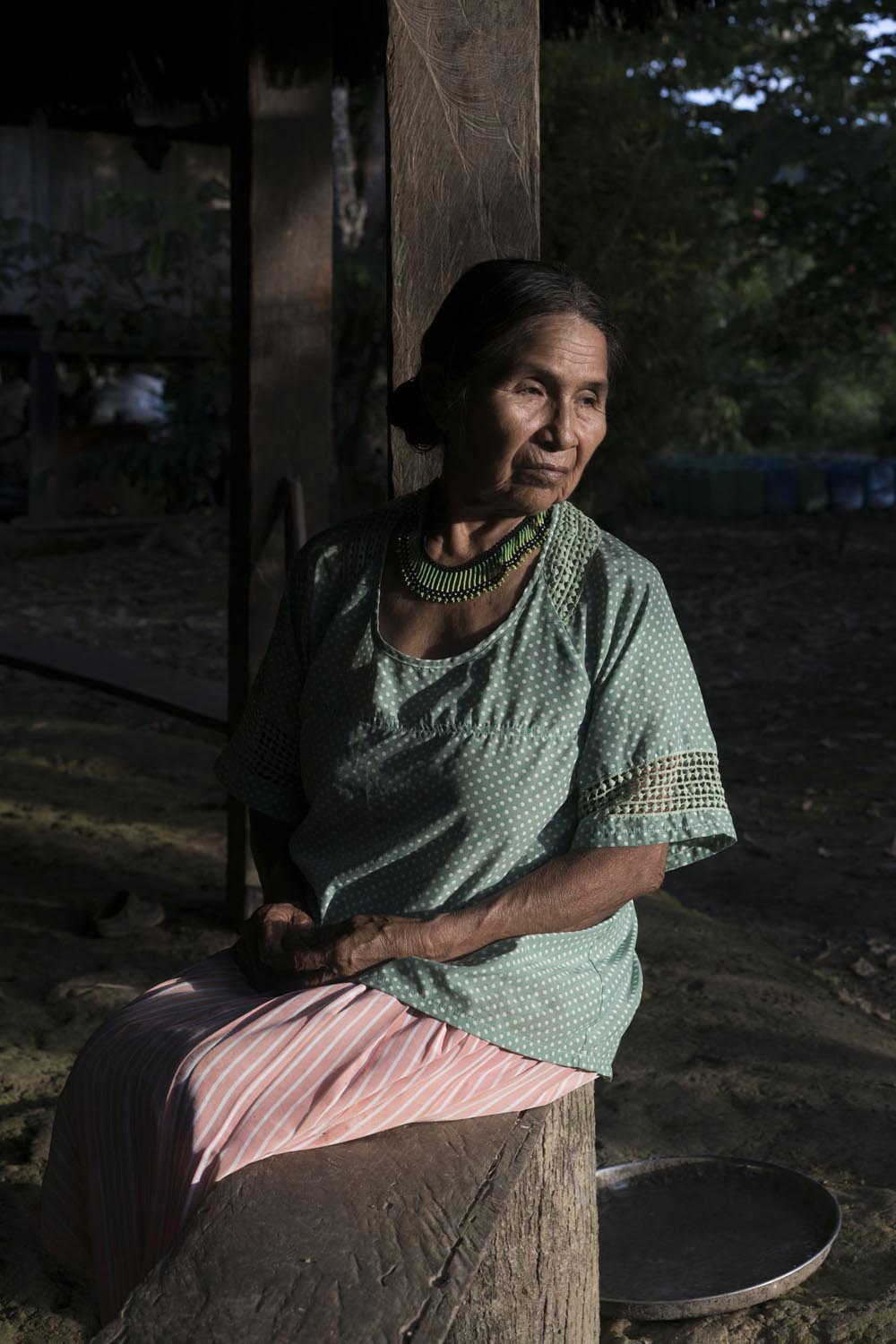 A portrait of Narcisa Gualinga in front of her son’s house. On this day, she was preparing chicha for her family. Chicha is a traditional beverage made of manioc. To prepare chicha, the manioc root must be boiled for several hours before being pressed into a type of purée. The resulting mass is chewed, spit out and finally poured into leaf-covered clay pots for fermentation. This drink, known as “spit beer”, is prepared exclusively by women. 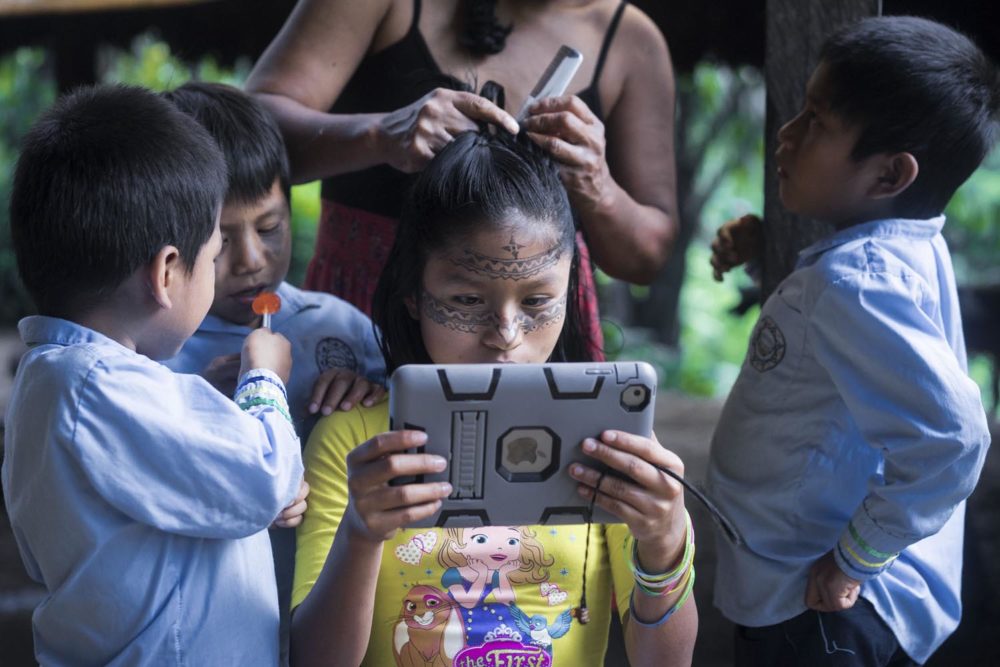 Leyli Gualinga, 11, is surrounded by her brothers as she plays on her iPad and has her hair combed by her mother, Marcia Gualinga. The Sarayaku community is known around the world for its political resistance to oil extraction in the rainforest. Thanks to social media, these people have managed to win international allies and exert pressure on the Ecuadorian government. Their connection to the outside world has brought with it the influence of Western culture, particularly for young people. 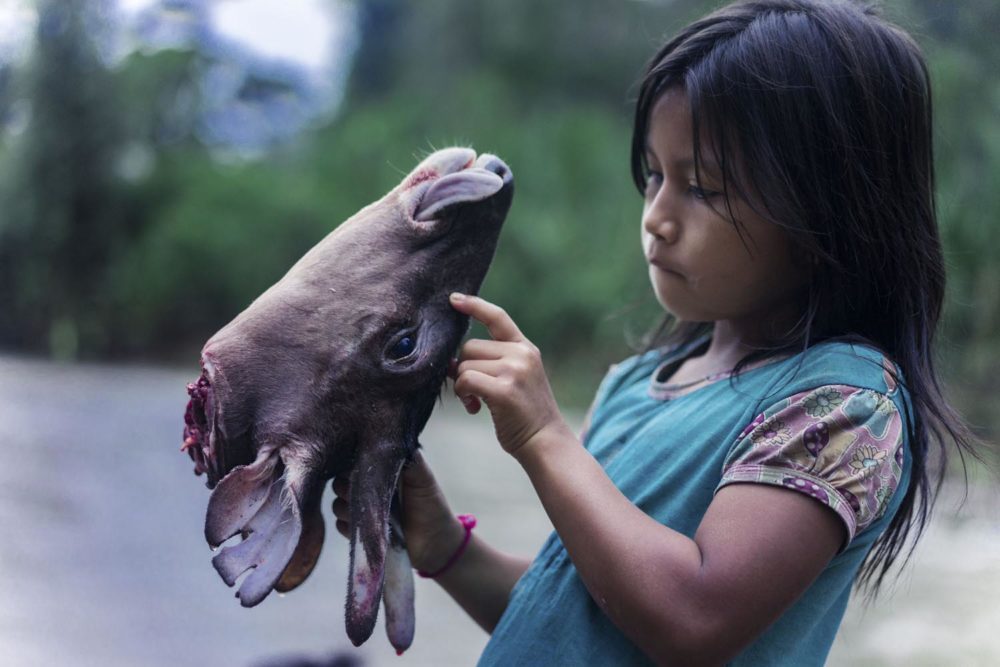 Dyana Malaver holds the head of a deer shot by her father near the River Rotuno on the previous night. Community members take from the jungle only what they need to survive and use everything. The meat and innards of animals are used as food; the skin is used to make tambourines, fur and feathers decorate festival costumes. 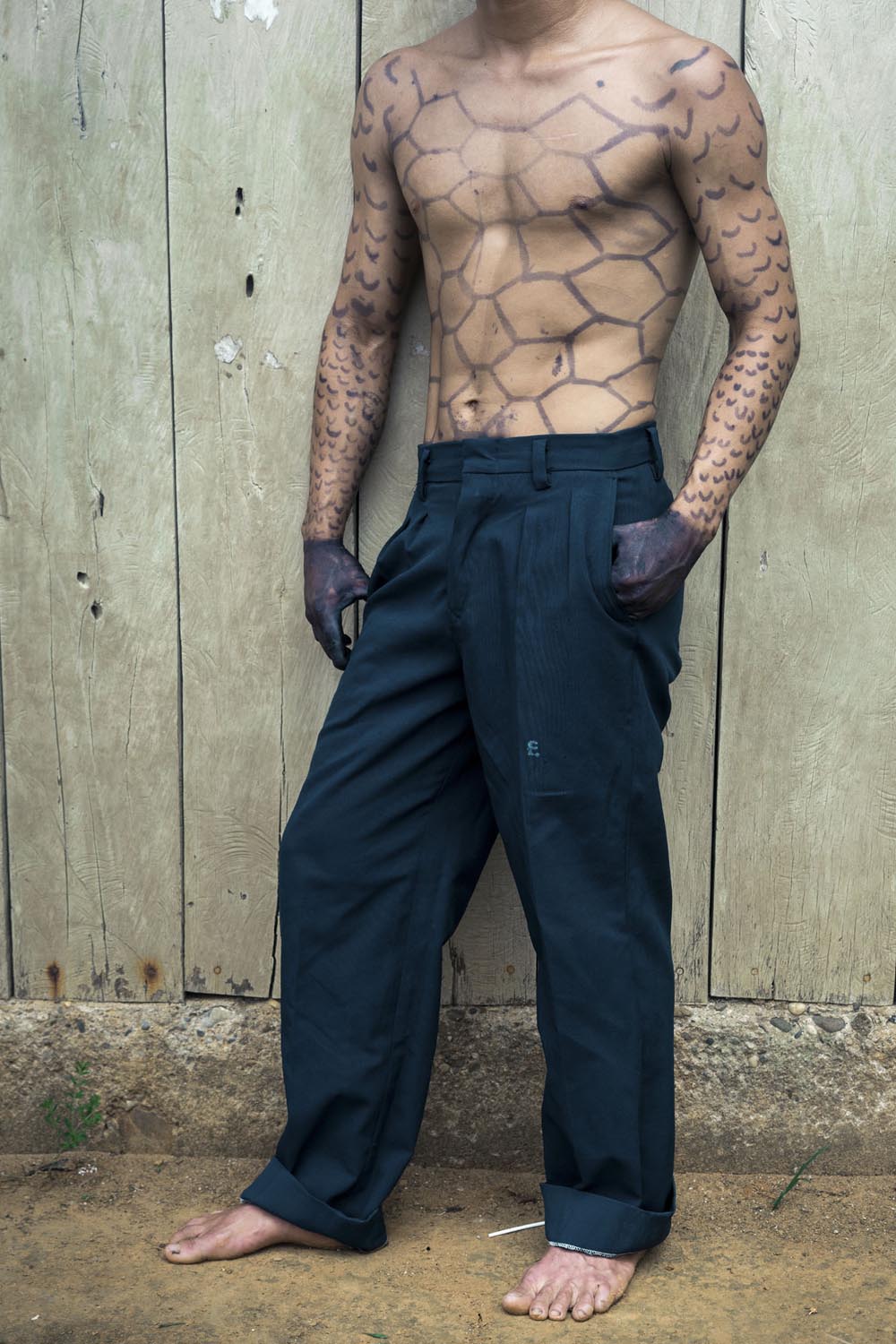 A young man has painted his body with wituk. Wituk patterns can vary. Men ornament themselves most often with geometric shapes that imitate natural textures such as snakeskin. Wituk used to be used for terrifying war paint; nowadays this body art is seen primarily at festivals and social protests. 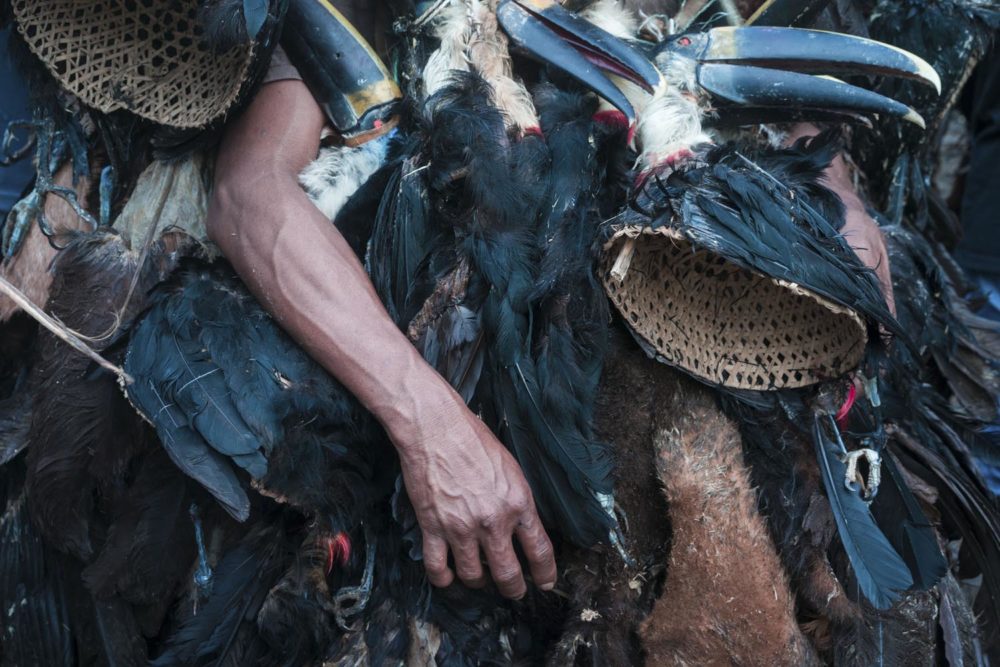 It is the last day of the Uyantza Raymi festival. Four teams of men have been hunting deep in the jungle for several days. On this day, each team leader, known as the “prioste”, dresses himself in the skins, furs, feathers and heads that his team has caught, carries them back into the jungle and throws them into the Río Bobonaza in order to close the circle of life. 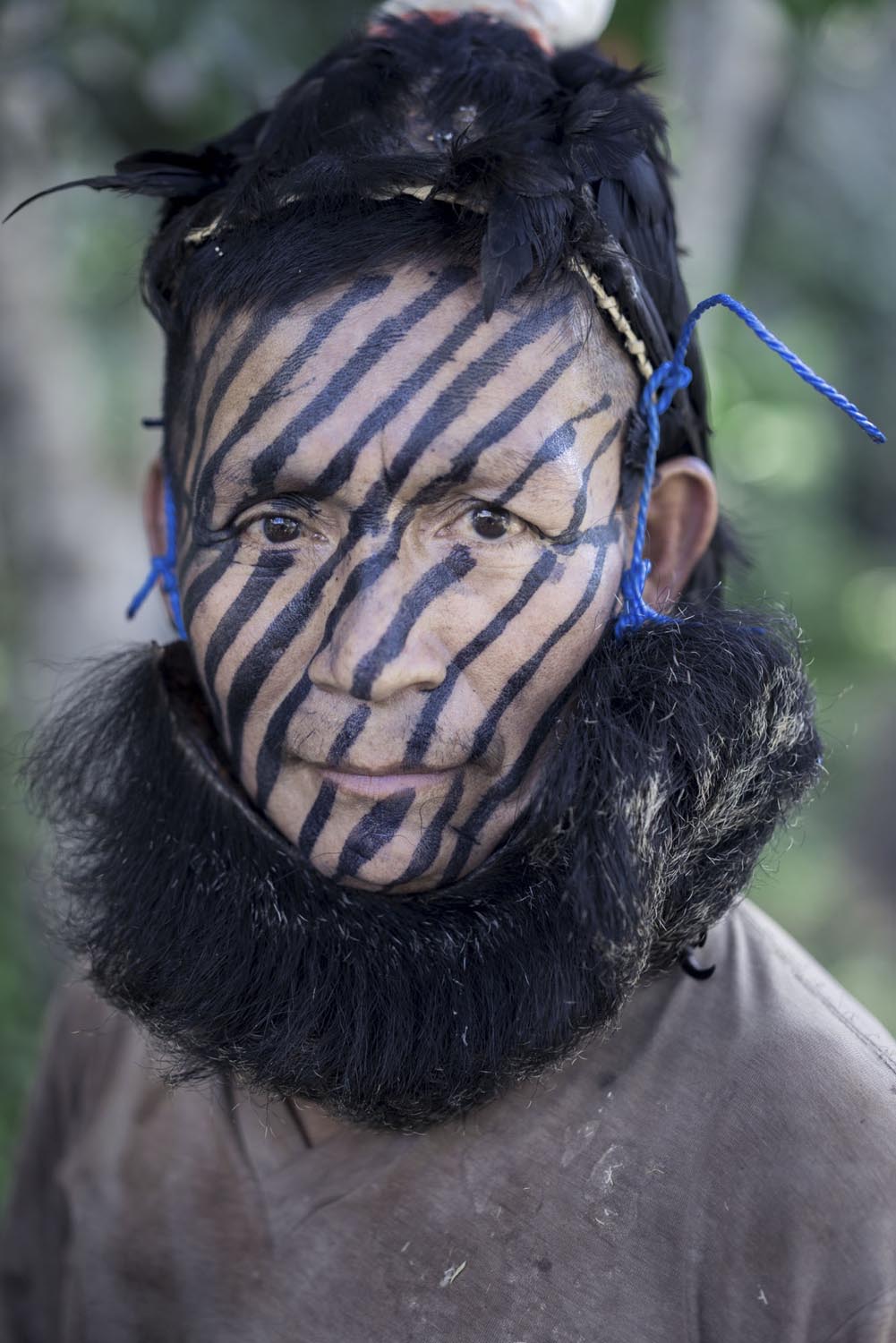 A portrait of Otoniel Gualinga, who has painted his face with wituk and donned a beard made of monkey fur. Wituk patterns can vary. Men tend to paint their faces with geometric shapes and thick lines. Wituk used to be used for terrifying war paint; nowadays this body art is seen primarily at festivals and social protests. 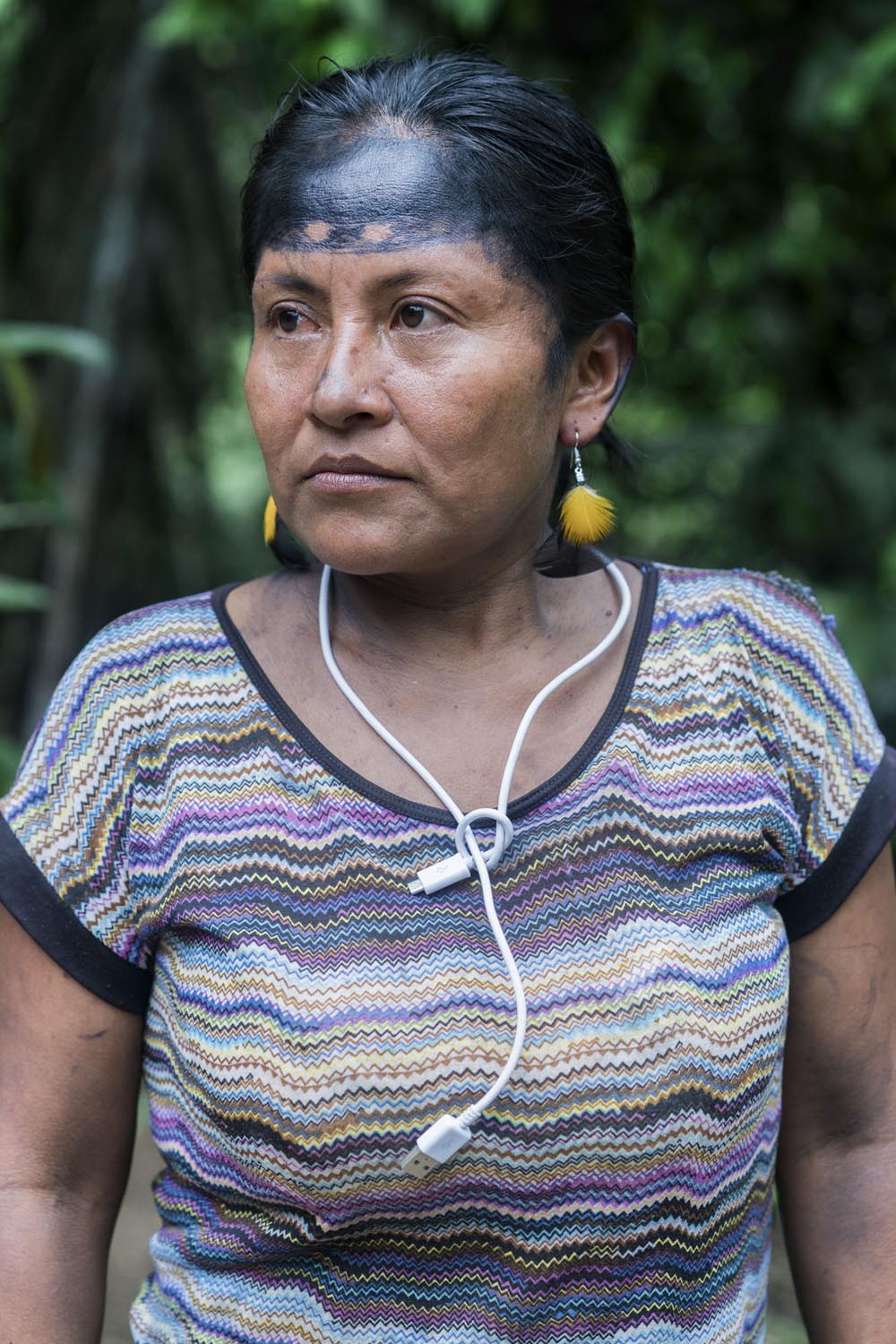 A portrait of Imelda Gualinga on her way to Wayusa Net, a hut with a satellite internet connection. It is one of the few places in the community that has enough electrical power to charge batteries, mobile telephones and computers. 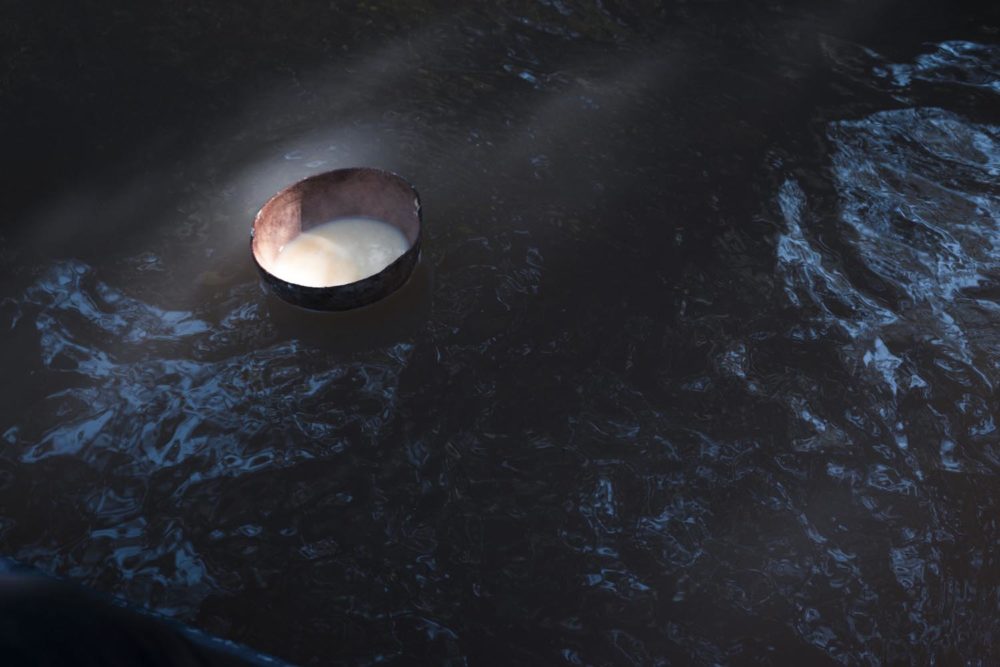 A pilche (Eng.: bowl) of chicha floats in the Río Bobonaza. Chicha is a traditional beverage made of manioc. To prepare chicha, the manioc root must be boiled for several hours before being pressed into a type of purée. The resulting mass is chewed, spit out and finally poured into leaf-covered clay pots for fermentation. This drink, known as “spit beer”, is prepared exclusively by women. 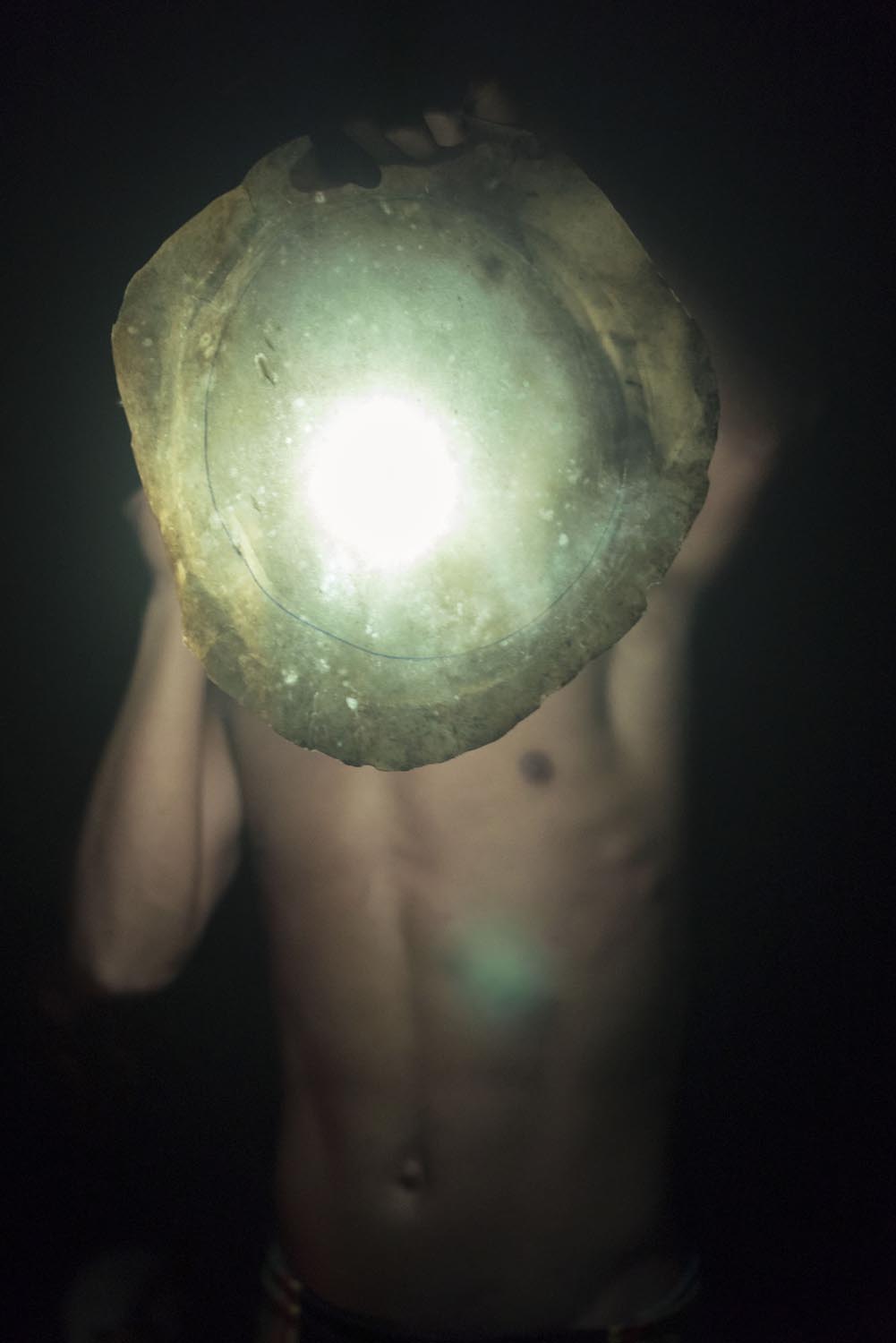 A young man examines a peccary skin that will later be used to make a tambourine. Before important festivals such as Uyantza Raymi, the men spend several weeks deep in the jungle, hunting and fishing for the entire community. Nothing is wasted. Every part of an animal is used for food, clothing or musical instruments. 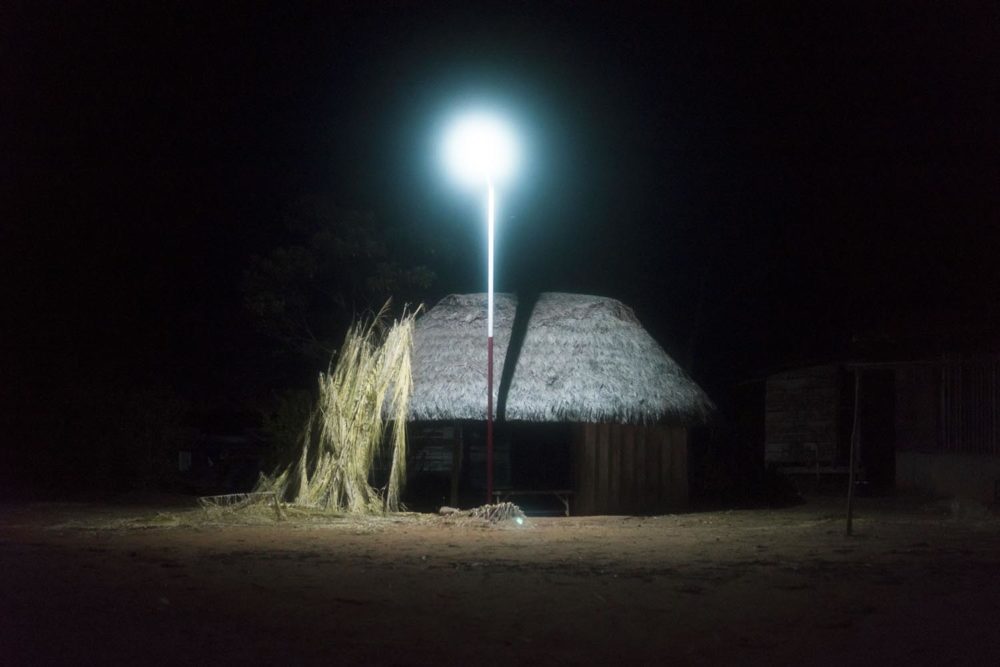 Because Sarayaku is not connected to the national grid, the community gets its electricity primarily from solar collectors and, to a lesser extent, small gas-driven power plants and batteries.

For the indigenous people of the Amazon, particularly the Kichwa of Sarayaku, the forest means life. For the Kichwa, Kawsak Sacha, the “living forest”, is the source of physical and spiritual power, strength and health, a place where everything is interconnected. The life of the Kichwa and their ancestors is interwoven with lakes, trees and mountains. When this connection is destroyed, the soul dies and the life of the people comes to an end. For this reason, 1,200 Kichwa in the Ecuadorian community of Sarayaku have been fighting oil extraction in the rainforest since the early 2000s. The resistance movement, which continues today, has brought international recognition to the community. They have installed satellite internet and used social media in order to win allies and exert pressure on the Ecuadorian government. Although the law enshrines these indigenous people the rights to their land, politicians want to grant part of their territory to Chinese oil companies.

Secret Sarayaku Trailer. On Monday, June 22nd, at 20:00 CET Misha Vallejo will exclusively launch the interactive webpage of the Secret Sarayaku project at the LUMIX-Festival. secretsarayaku.net

I started to be seriously interested in photography a bit “late” in my life. It was when I turned 25 when, by coincidence, I had the chance to visit the first Lumix Festival while I was doing an exchange programme in graphic design in Germany. Looking at all of those amazing stories and hearing engaging conferences really sparked a desire within me to take photography classes. Since then, I managed to finish the Photojournalism course at the Saint Petersburg Faculty of Journalism A. Galperin and I obtained an MA in Documentary Photography at the London College of Communication (University of the Arts, London). The last eight years of my life, I have been working with photography and videography.

I heard about this indigenous group fighting a lawsuit at the Inter-American Court of Human Rights against the State of Ecuador in 2010. In 2012 they won it (it was proven that the state entered their ancestral land in the Amazon in order to explore for oil without their consent) and I became more interested in getting to know them. Finally, in 2015 I obtained their permission to enter their land and since then I have been documenting their everyday life. At the beginning I was interested in capturing the syncretic mix of Western and ancestral cultures with photography, but I soon realised that I would also need video and audio in order to capture the richness of their world view and philosophy of living in balance with nature.

I think that visual journalism in general and photojournalism in particular have to evolve quickly. For me it is worrying that we see the same kinds of stories and photographic approaches get the headlines of mass media since the 70s. A photograph of Robert Capa could win a World Press Photo nowadays, whereas a film from the 30s could never win an Oscar today. Perhaps it is a rough comparison, but this is a way to illustrate how photography is stuck in a romantic past. It is essential to get rid of this romanticism of the photographer being the one who discovers the world and brings the “truth” to the society. We have to be aware that photography is not objective and embrace it. I think that the future of visual journalism lies in a successful collaboration between all of the agents involved in the story: photographer, subjects, local reporters, audience and media. In this way we could see the same story from various perspectives and technology can help us to implement this new kind of storytelling. There are loads of accessible tools nowadays that go beyond the classic photo camera: VR, drones, underwater cameras, IR cameras, video cameras, audio recorders, etc. In order to spread these stories, we can start using apps or webs to make them more immersive. We can exploit the power of social media to get people to these stories. This topic is quite wide and there is a lot to discuss; what is inevitable to me, is that photography needs to change.

Cristina Gualinga from the Ecuadorian Amazon indigenous community of Sarayaku talks about the spirits of the rainforest and how they will be affected if the oil company enters their ancestral land. ©Misha Vallejo

Abigail Gualinga, a young woman from Sarayaku, talks about contemporary indigenous life in her community and the younger generation’s responsibility for the future of their culture. © Misha Vallejo 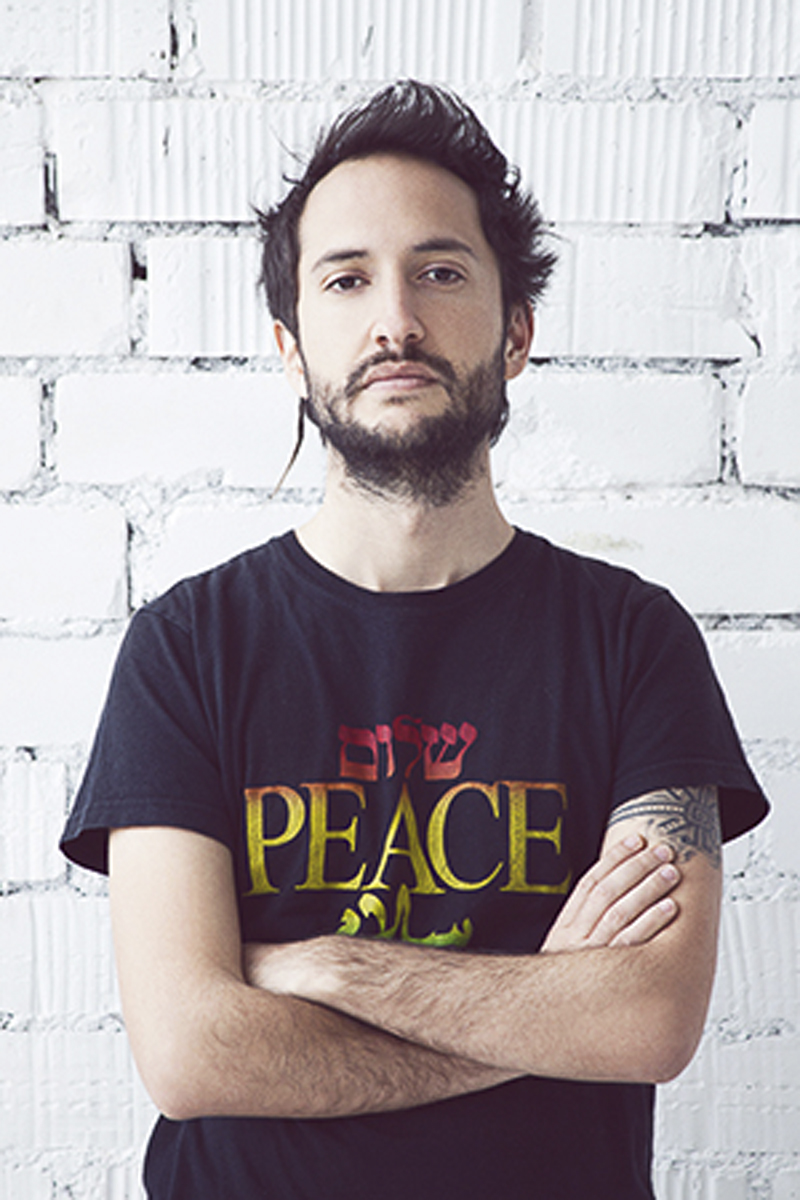 *1985 in Riobamba, Ecuador
Misha Vallejo studied Photojournalism in Saint Petersburg and completed his master’s degree in Documentary Photography at the London College of Communication in 2014. He works as a photo and video freelancer for international media, as well as for NGOs in the Americas and Europe. His photos have appeared in GEO, VICE, Leica Fotografie International, Photo World China and other publications. Apart from his journalistic activities, he gives workshops on topics such as photo books and picture language. 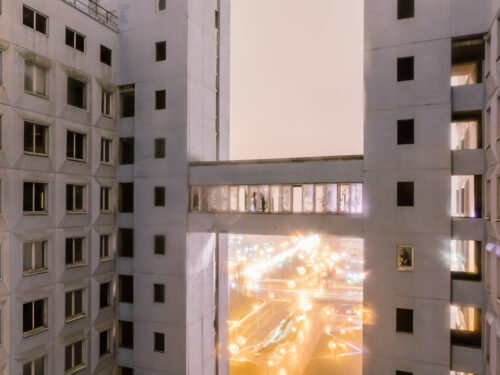 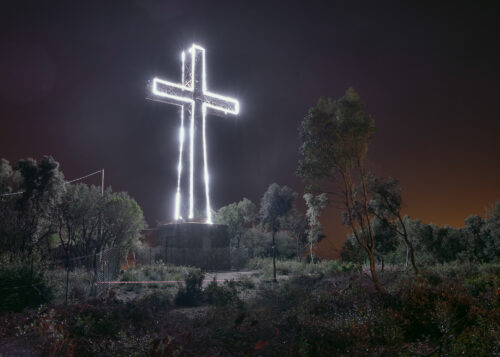 Volker Crone
About the End of Darkness