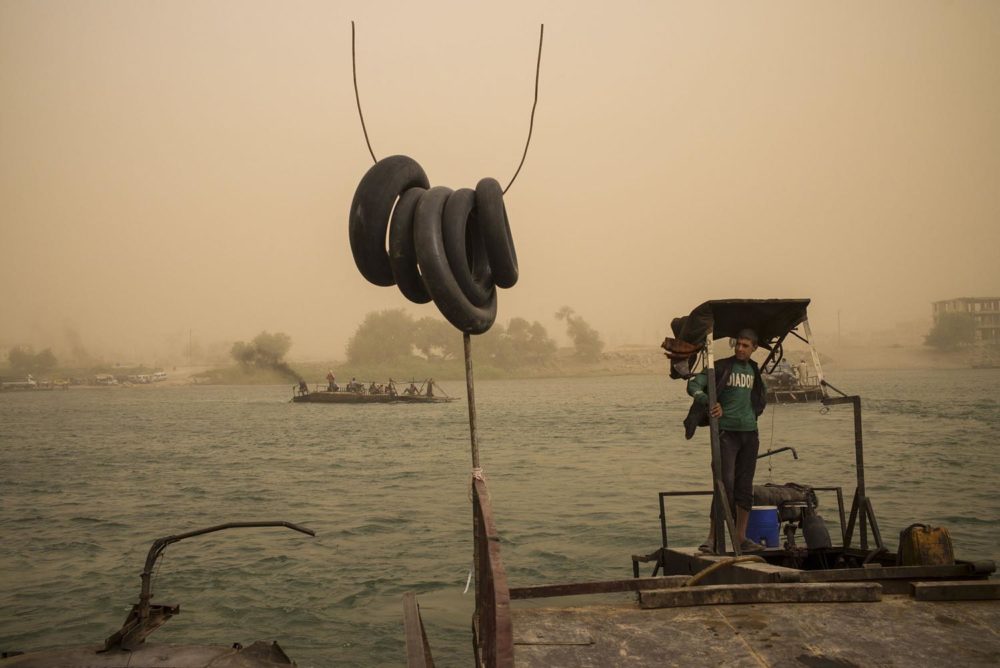 Civilians transport cars, harvests and other goods across the Euphrates in Raqqa. Many of the bridges that had connected the northern and southern parts of the city have been destroyed in air attacks. Eight months after the liberation of Raqqa, civilians are returning to rebuild their lives and homes. The shops will reopen in time for Ramadan. 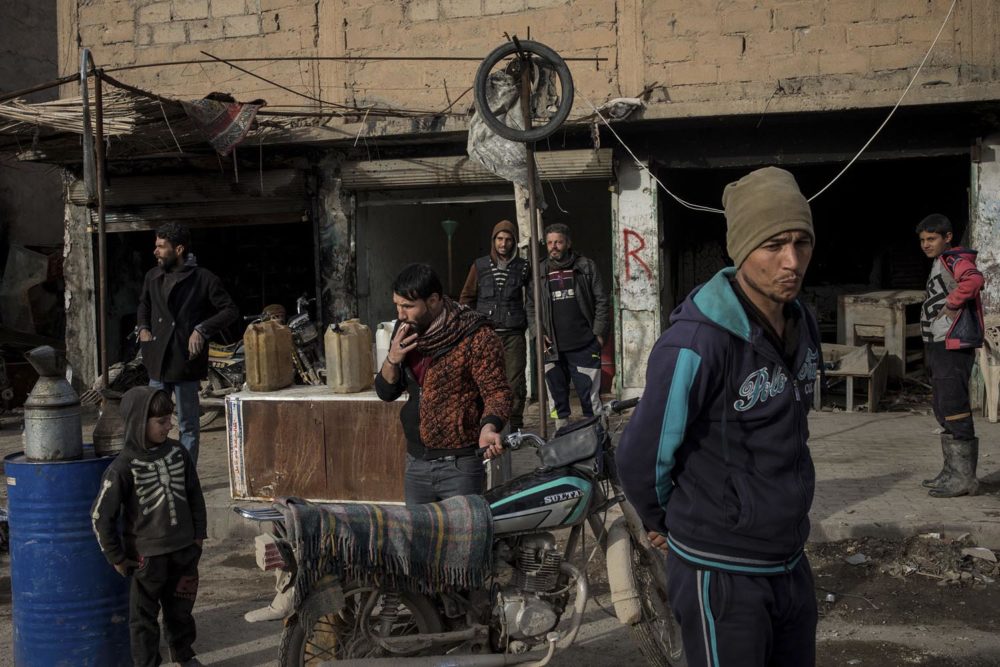 Civilians on the streets of Hajin, a city in Deir ez-Zor Governate that was long controlled by ISIS. After liberation, people started returning to their homes despite the continuing dangers of unexploded bombs and ISIS sleepers. 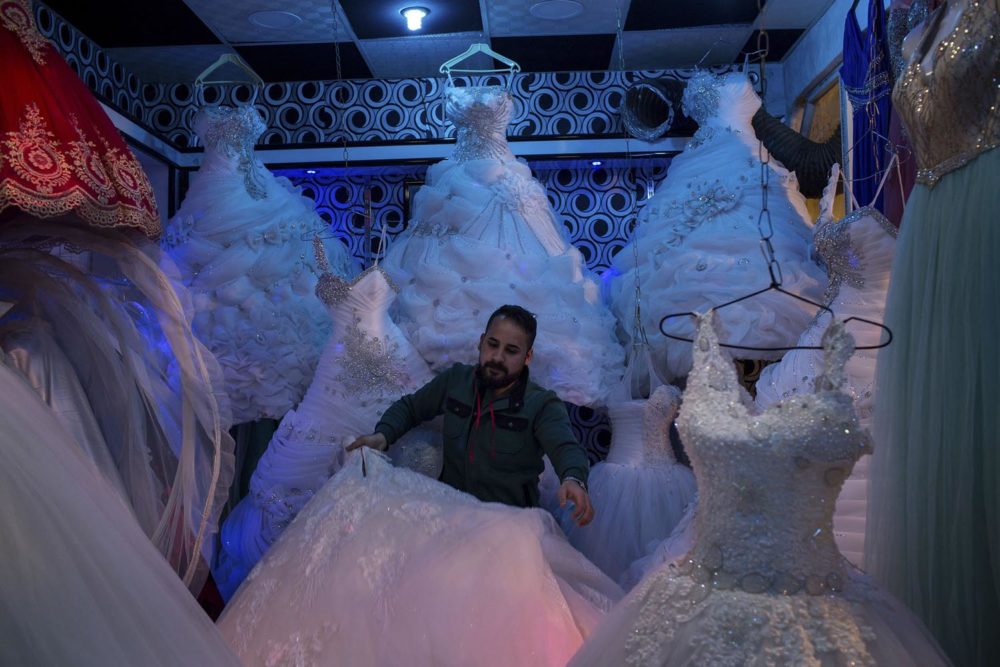 Osama Abdulmonem, 27, in his bridal shop in Mosul. The shop remained open under the ISIS regime, although he had to sell used dresses because he could not import fabrics from Turkey. “Business was good, but he worked for the men from ISIS. Some of them had four wives”, says Abdulmonem. If he had not done it, he would have been imprisoned. 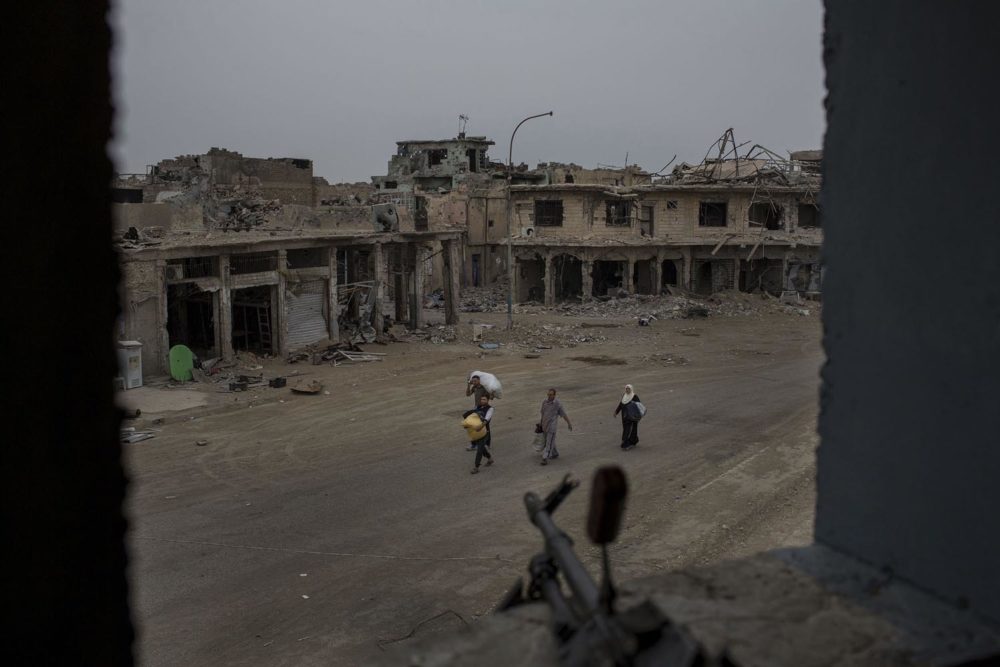 Members of a family transport things they were able to salvage from their house in Mosul. Many people want to return home and rebuild their lives. Just months ago, this area of the Old Town was the scene of heavy fighting. The rotting corpses of ISIS soldiers still lie everywhere in these historic streets. 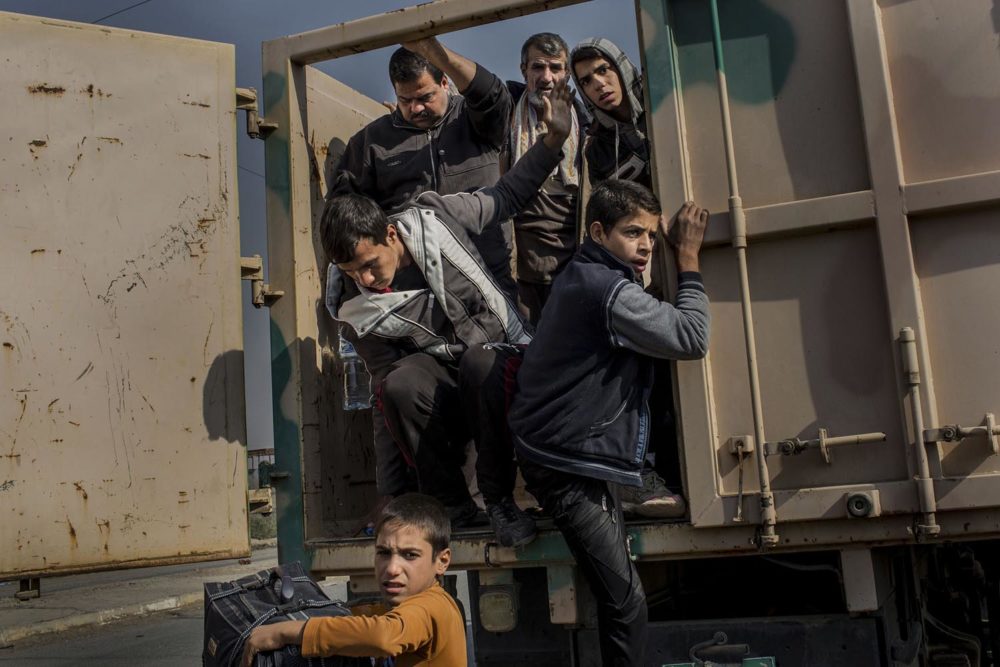 A convoy of refugees from Mosul at a checkpoint. In their checks, Iraqi security forces use wanted lists in an attempt to identify ISIS fighters or collaborators. Human rights organisations such as Amnesty International have expressed harsh criticism of the procedures at these checkpoints, which have allegedly led to acts of revenge and torture as well as executions of Sunni Muslims. 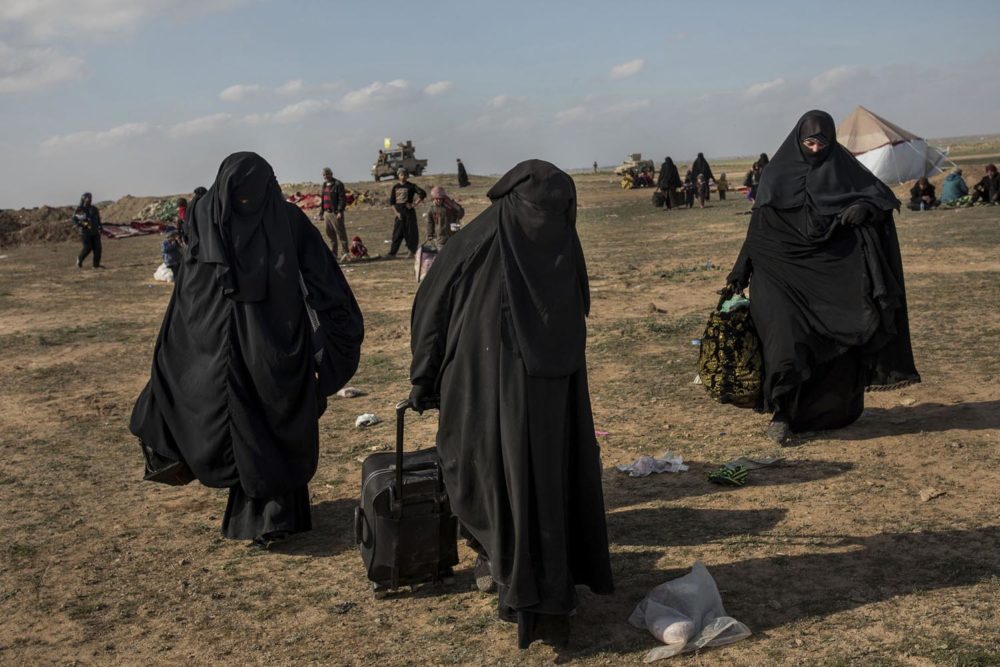 Women, possible ISIS affiliates, at a checkpoint near Baghuz. With the support of the US-led coalition, the Syrian Democratic Forces (SDF) have initiated a week-long campaign aiming to drive the last members of ISIS from Baghuz. ISIS still controls a territory measuring around two square kilometres near the Syrian border to Iraq. 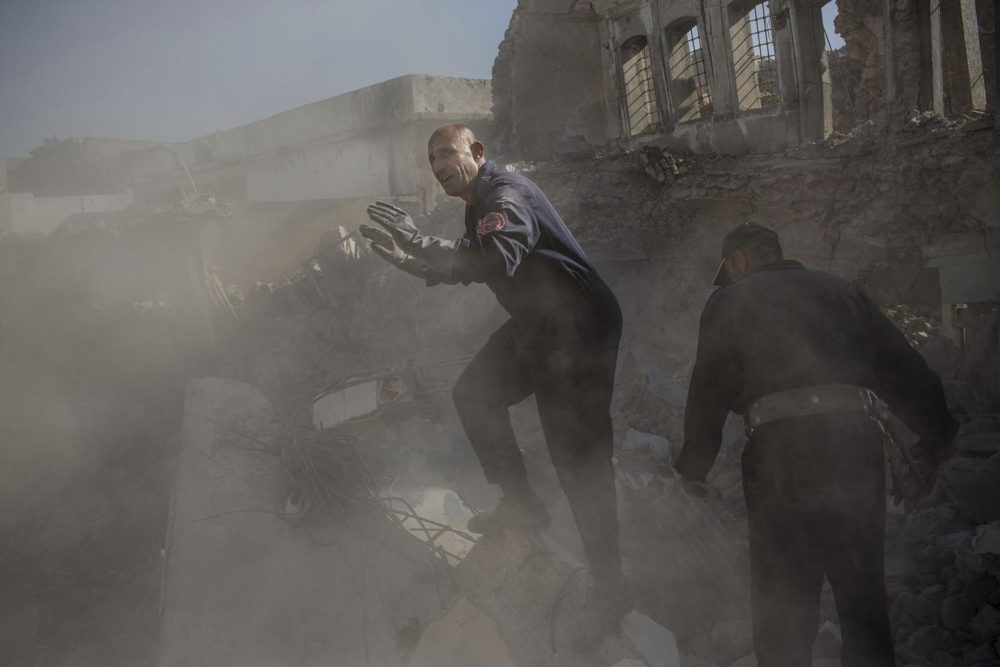 Members of Mosul’s Civil Defence search for the bodies of civilians in the Old Town. At least six people, including three children, were killed here in an air attack. It is presumed that dozens of bodies are still beneath the ruins. While civilians are recovered and buried by their families, Civil Defence members leave ISIS fighters to lie there. 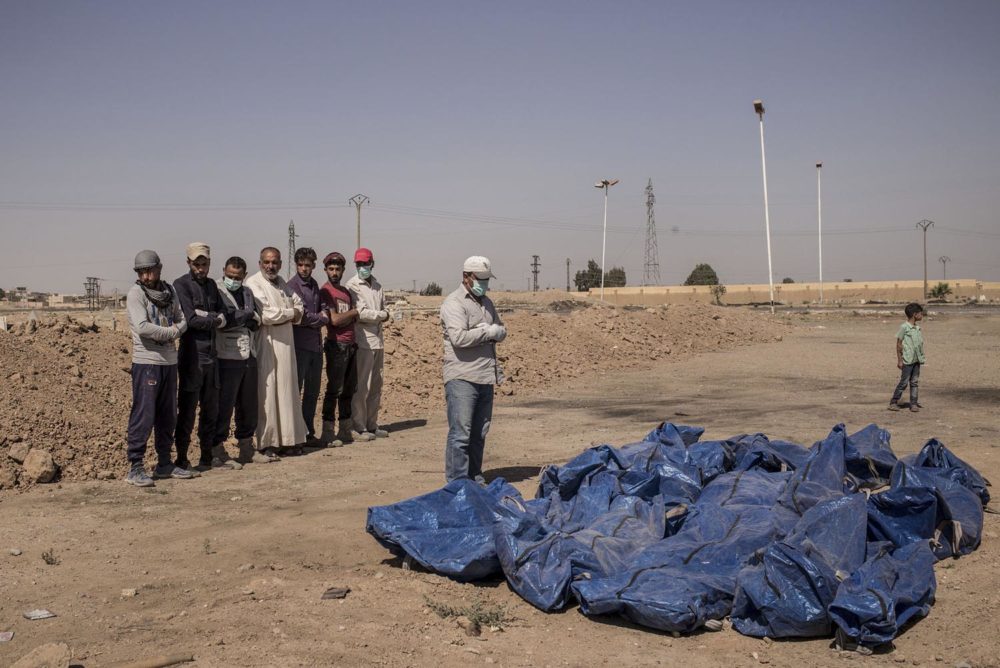 Members of the Raqqa Civil Defence pray before body bags containing corpses and other human remains exhumed from a mass grave. The dead, who presumably perished in air attacks, will now be buried in a cemetery on the outskirts of the city. 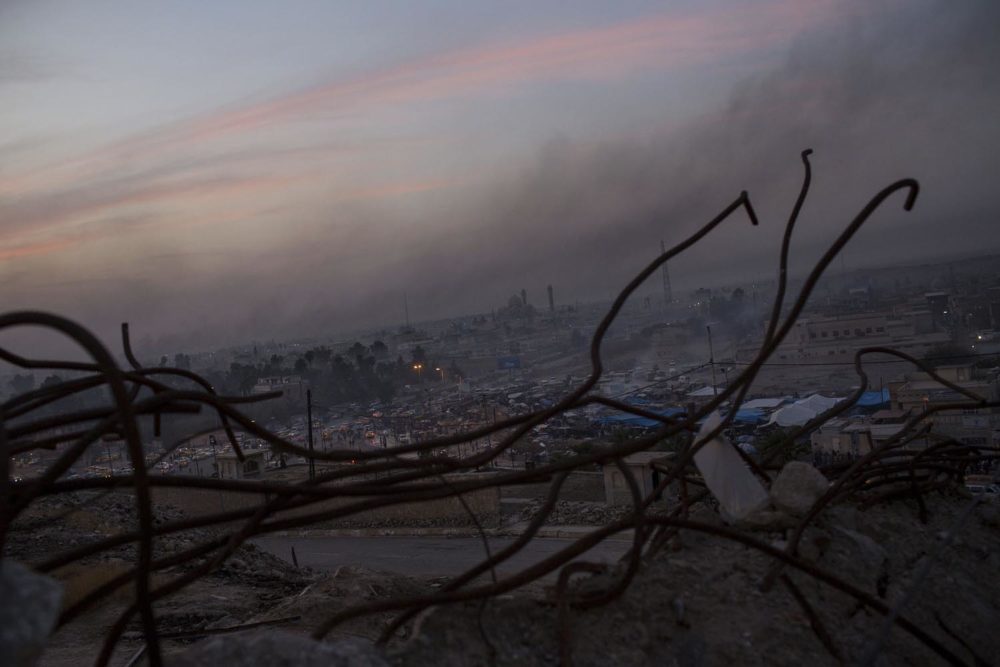 The ruins of the destroyed shrine to Nabi Yunus, also known as Jonah’s Tomb, in Mosul. This shrine, one of the holiest sites for Moslawis, was blown up by ISIS. 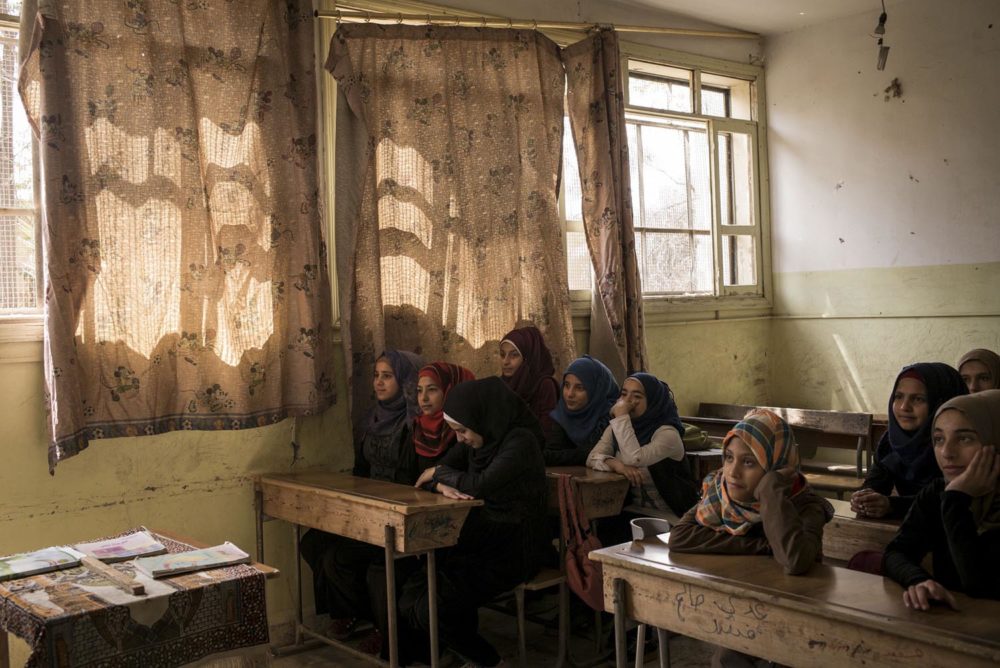 A lesson at the heavily damaged Hawari Bu Medyan school in Raqqa in May 2018. The Hisbah, ISIS’ morality police, were headquartered just opposite. This was one of the most contested places in the struggle to reconquer the city. The school reopened in January 2018 after the buildings had been cleared of unexploded bombs. 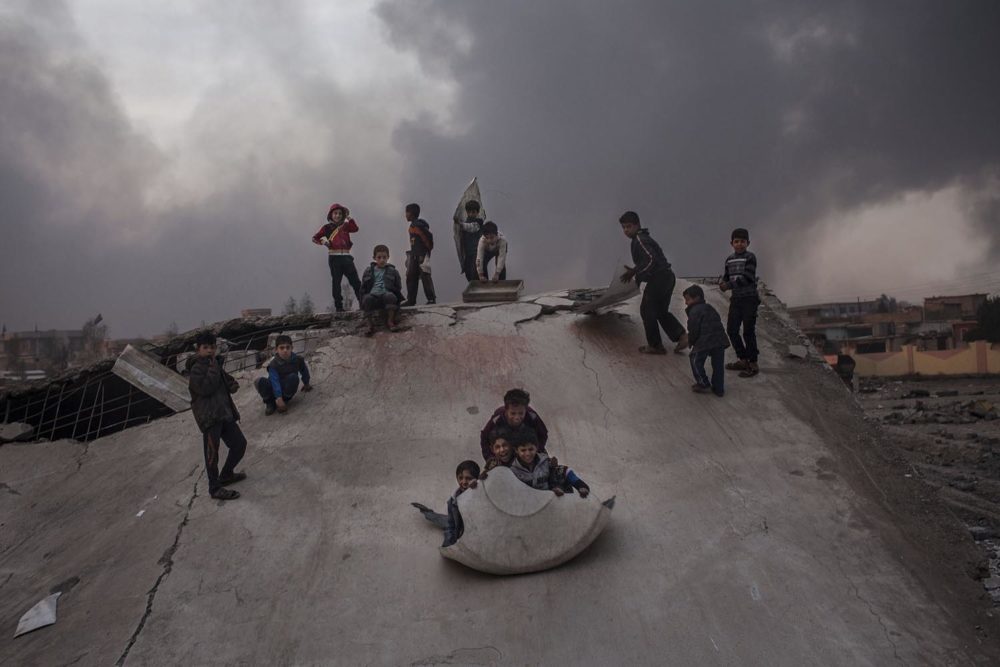 Children play in the ruins of a stadium under an enormous cloud of smoke in the Iraqi city of Qayyarah. This stadium, which served ISIS as an armoury, was destroyed in air attacks carried out by the coalition. When they withdrew, ISIS forces set oil wells on fire. 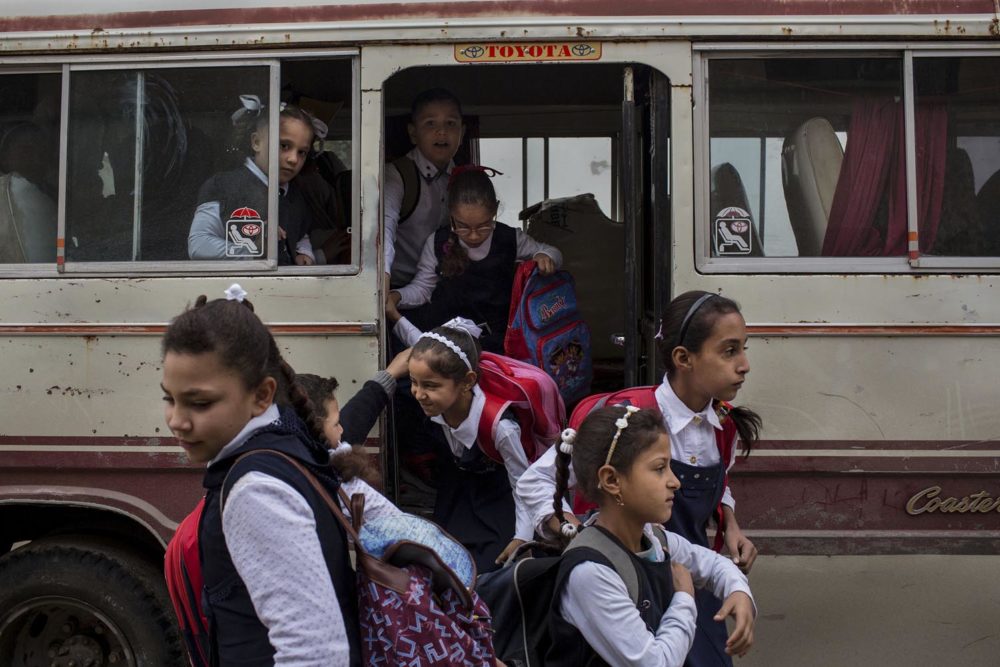 Schoolchildren in western Mosul on 6 November 2017. Since this Iraqi city was declared liberated four months ago, a few schools have reopened. 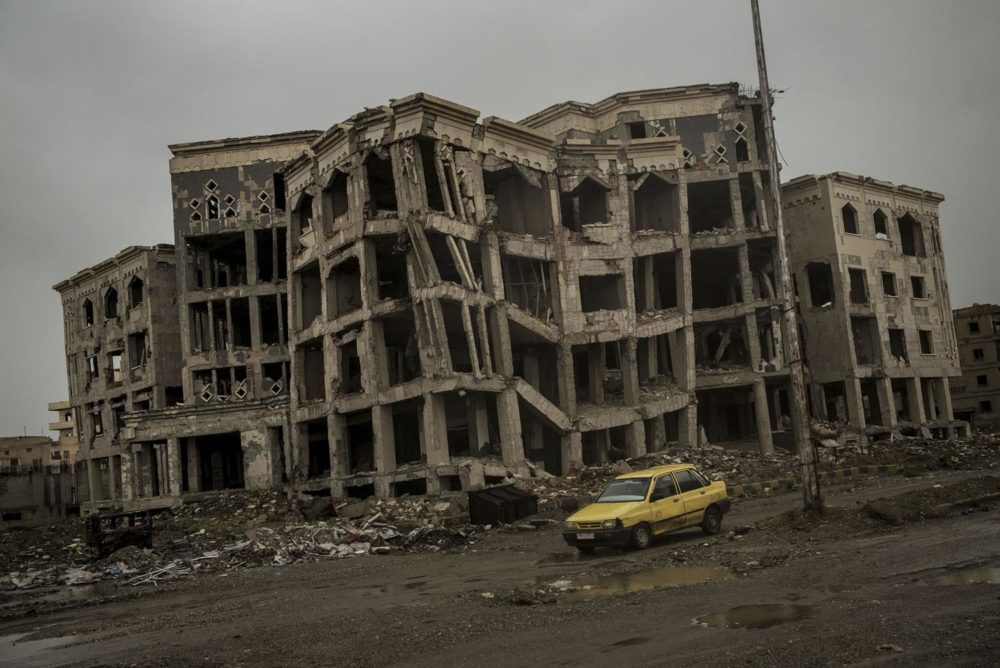 A damaged building in the Syrian city of Raqqa in May 2018. After the city was liberated from ISIS, residents returned to start again and rebuild their homes. 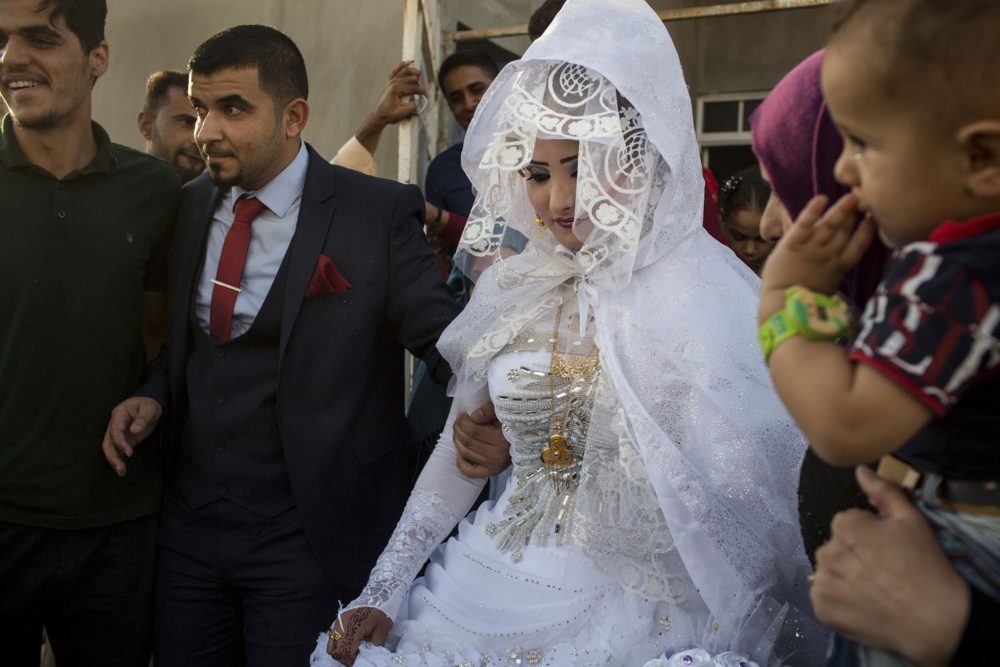 Khaled Mohamed and his bride before their wedding ceremony in Mosul in November 2017. Khaled’s brother Hashem is also marrying on this day in a circle of family and neighbours. Before the ceremony, the brothers’ father asked the guests not to celebrate too loudly – out of respect for the people in Mosul who are in mourning. 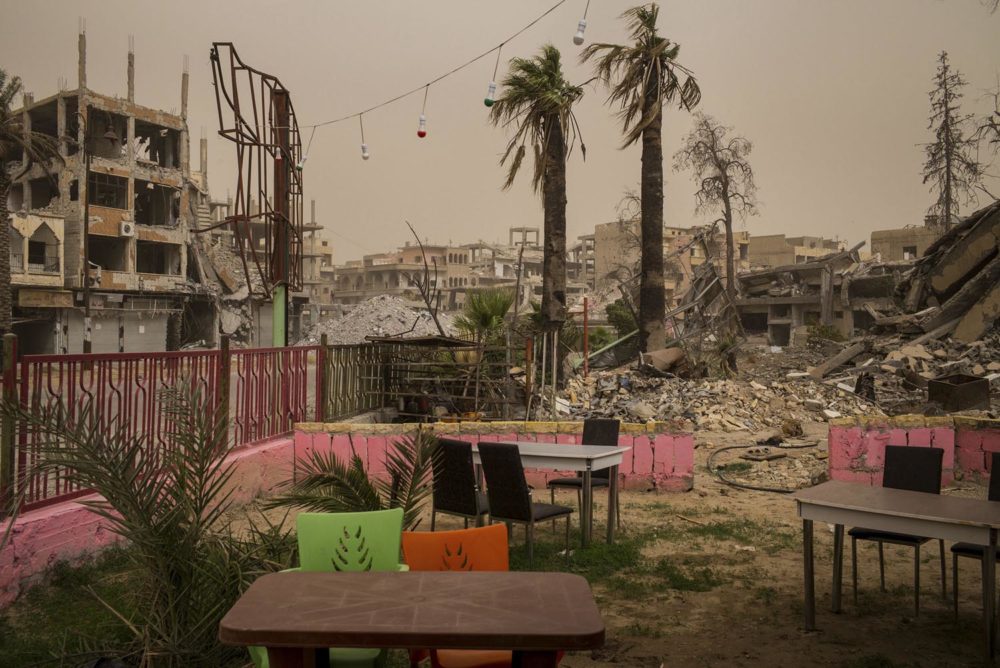 A newly opened café amid the ruins of Raqqa. Naim Square was a centre of social life before becoming a setting for public executions and a symbol of ISIS’ brutality. 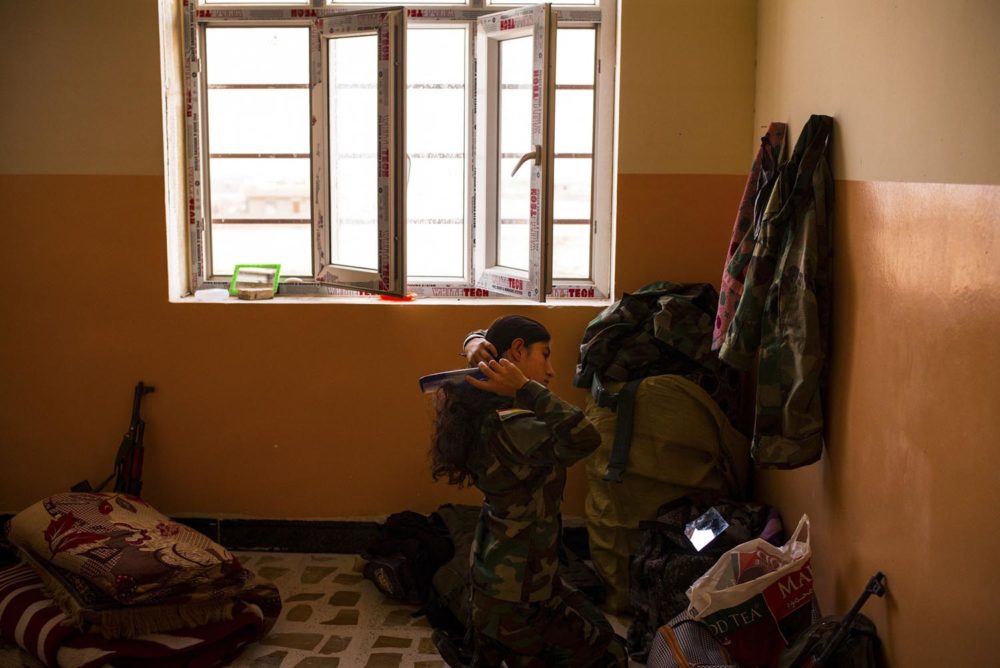 A soldier combs her hair. Her battalion of “Sun Ladies” comprises several hundred Yazidi women, some of whom were once enslaved by ISIS. Now, with support from the Kurdish Peshmerga, they are fighting the extremists. 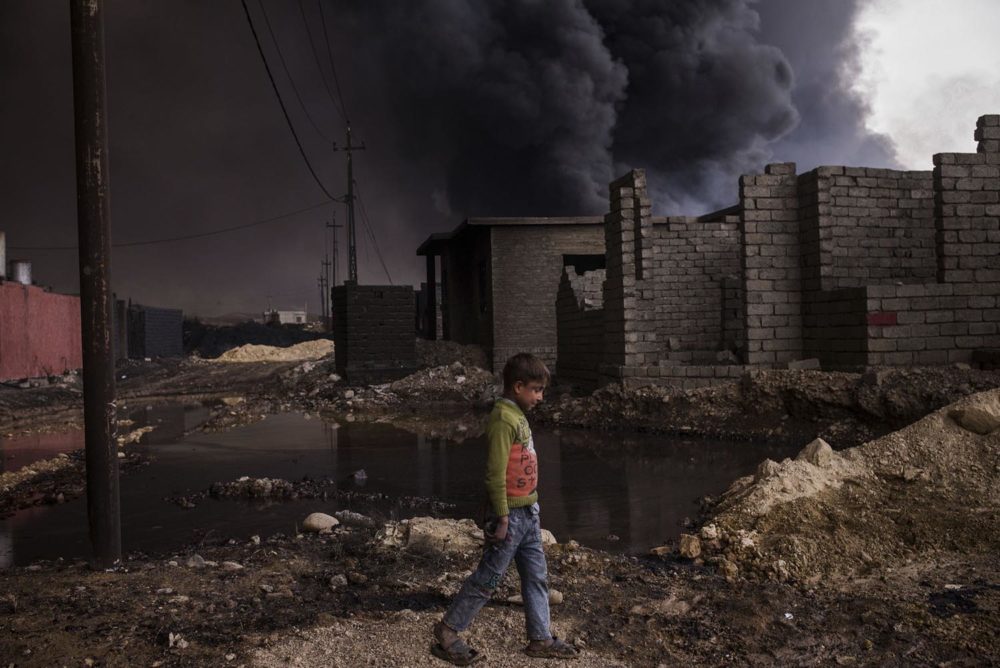 A boy walks amid the rubble of Qayyarah. All around the Iraqi city, oil wells are burning. 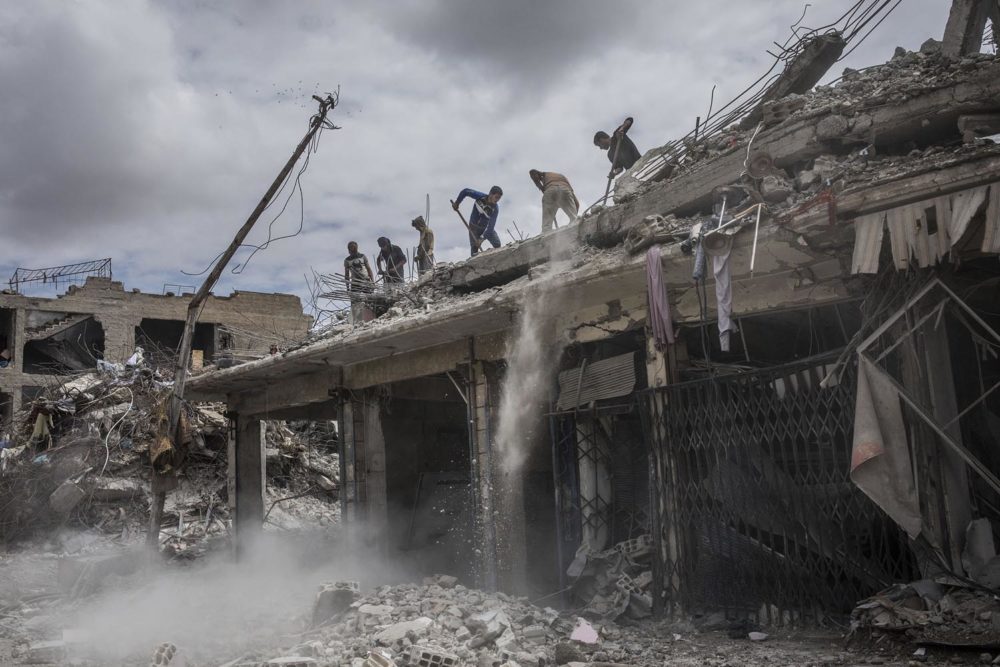 On 9 May 2018, workers clear the rubble from a destroyed building in the Syrian city of Raqqa. It is estimated that 80 per cent of the infrastructure was destroyed or damaged in the struggle to reconquer the city and repel ISIS forces. Thousands of people were killed in air attacks organised by the international coalition after ISIS had already executed many civilians during the occupation, which lasted from 2014 until 2017. 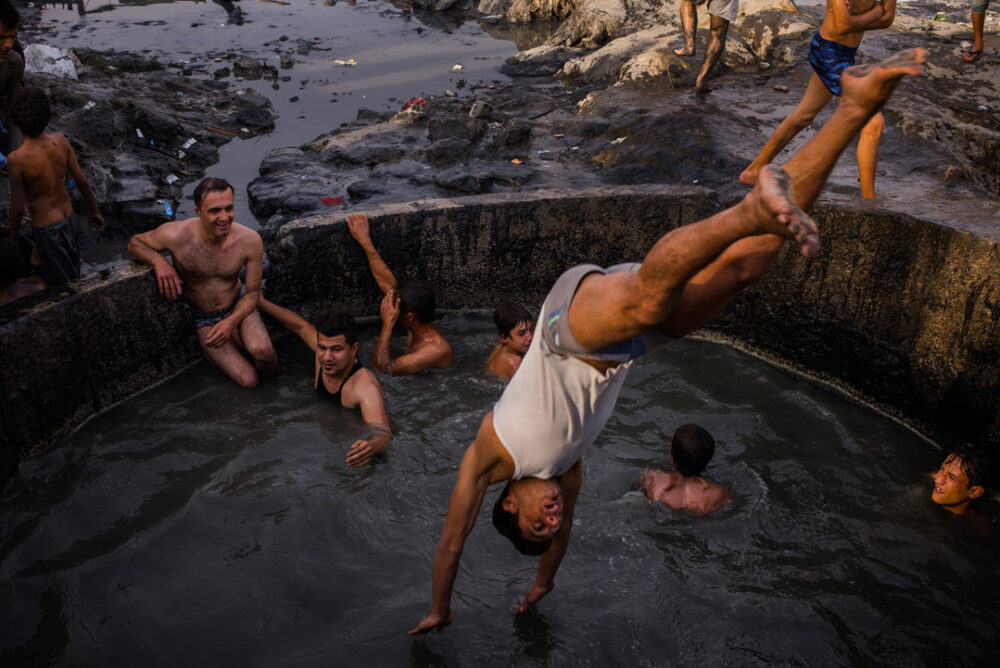 Hamam al-Alil two days after Iraqi forces liberated the city from ISIS. Many people returned to their homes despite sporadic fighting between ISIS recruits and Iraqi soldiers in Hamam al-Alil. 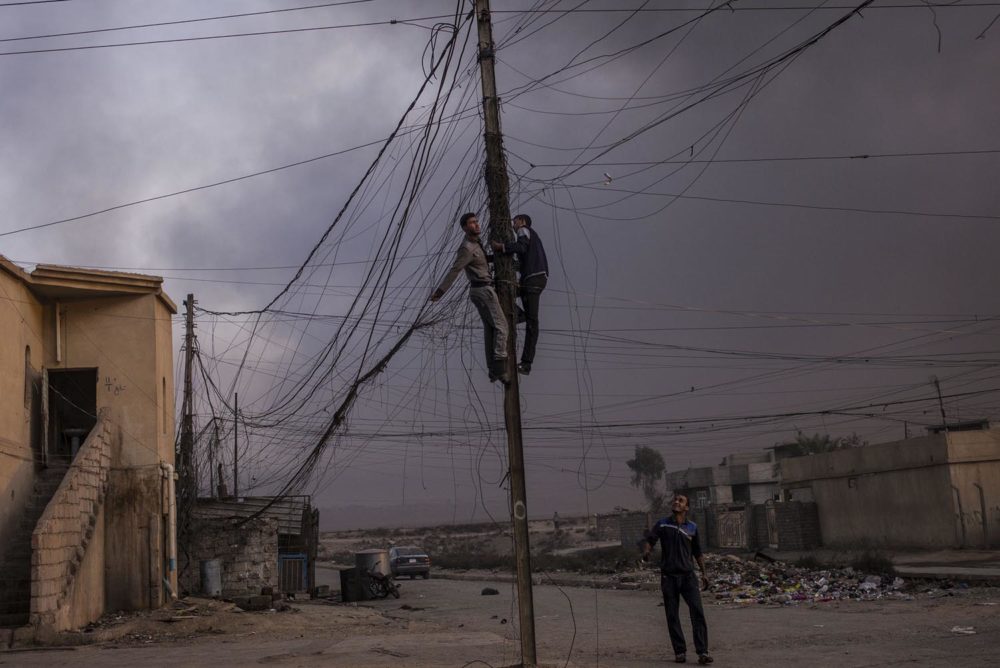 Men try to reconnect the power lines to again supply the Iraqi city of Qayyarah with electricity. Many streets and districts of Qayyarah appear apocalyptic. Oil residue covers every surface. Dozens of oil wells were set on fire when ISIS forces were pushed back in the Battle of Mosul. ISIS funded its regime with oil from Qayyarah. 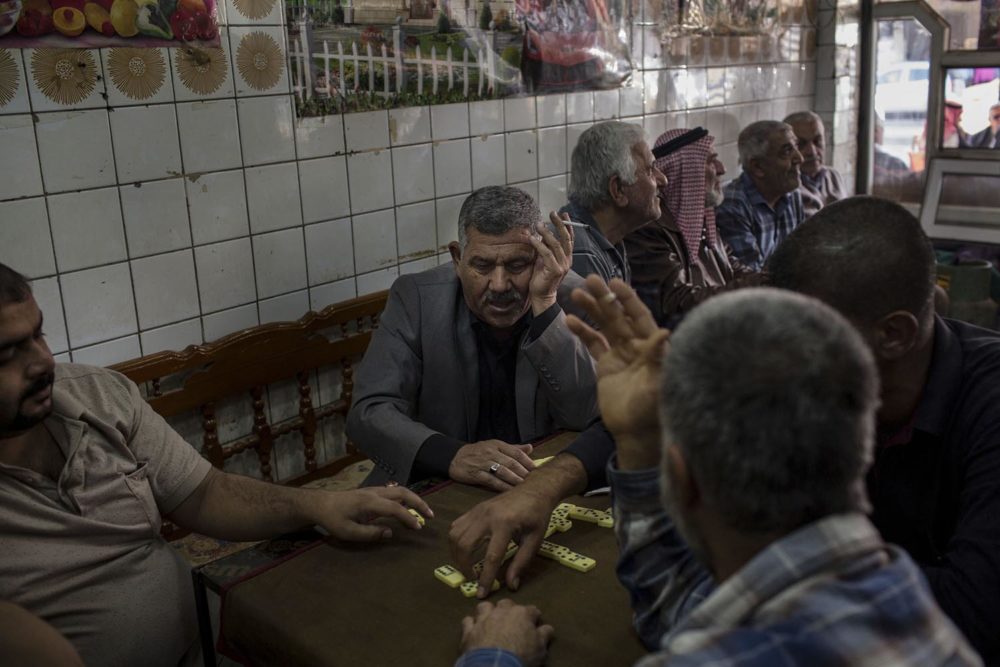 Men sit in a teahouse in Mosul, smoking and playing dominoes. The teahouse remained open during ISIS rule, but games and entertainment events were forbidden, as were smoking hookahs or cigarettes. 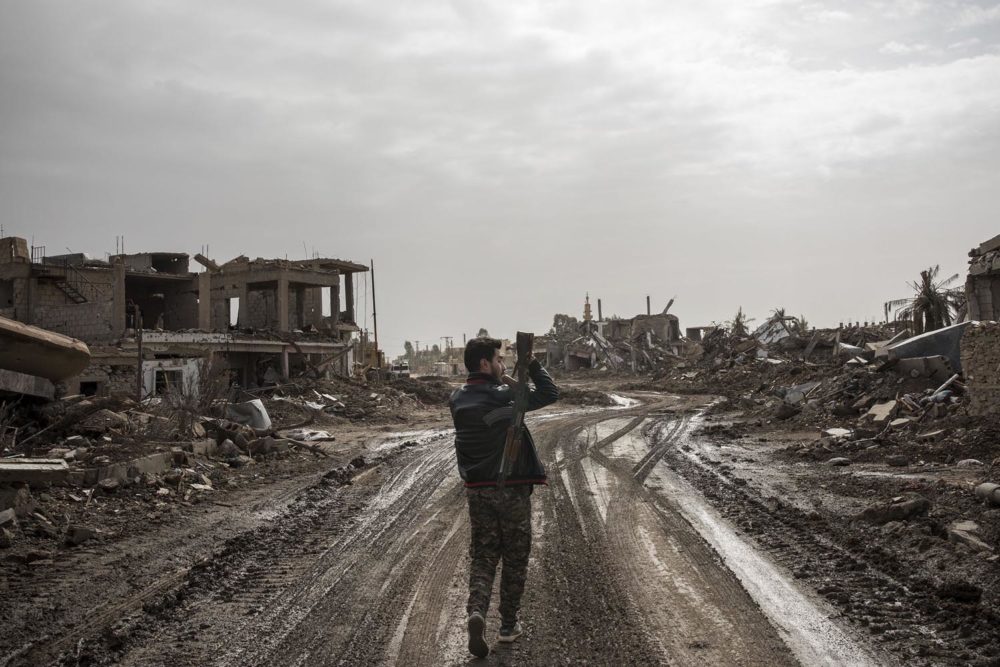 A fighter with the Syrian Democratic Forces in the destroyed city of Al-Susah. After liberation, with support from the US-led coalition, a week-long concentrated operation tracked down and drove out the remaining ISIS soldiers in the city.

What does the moment of transition between the end of a conflict and the return to “normal” life look like? These pictures form part of an ongoing project on the consequences of the wars against the Islamic State in Iraq and Syria (ISIS), wars that are bringing long-term changes to society. From 2014 until 2019, territories in both countries were controlled by the so-called caliphate of ISIS until the extremist group was ultimately driven out in the Battle of Baghuz Fawqani. Thousands of civilian victims were the price that was paid. They died, were expelled or were exiled. The survivors now bear the burden as they try to rebuild their country, for many cities and communities, even months after liberation, resemble lunar landscapes. However, shops are reopening, and everyday life is slowly returning. Despite this seeming normality, dissatisfaction remains for many of those who have lost everything and must nonetheless carry on. If reconstruction does not proceed quickly, if people do not have work or a roof over their heads, this could provide fertile ground for new conflicts.

»I think it´s really important to not only show suffering and destruction in the story, there is destruction, but I think it was important to show the context of the destruction and how civilians, people and humanity fit into that situation.«

Photojournalist Nicole Tung speaks about her project As Strong as the War, As Soft as the Peace.

A formative moment in my career as a visual journalist was when I was still a student, in my first year at university. I had just finished interviewing women who had survived the genocide in Srebrenica, at a camp for internally displaced persons, when I photographed the group of women together. I am a self-taught photographer, and at that point I hadn’t quite decided if I wanted to be a writer or full-time photographer – but something about that moment – the women’s expressions, their emotion, their collective stories – and of course the influence of art and so many accomplished photographers before me culminated in me making that decision to be dedicated to photography.

The exhibition is showing work on the immediate aftermath of the war on the Islamic State in Iraq and Syria (ISIS). It was about asking, “what does that transitional moment – between the end of the conflict and a return to ‘normal’ life – look like?” The images are part of a project exploring the legacy of conflicts that are constantly reshaping the demographics, society, and livelihoods of the people enduring seemingly endless war. I had been covering the conflict in Syria since 2012, and felt that it was necessary to document the war on ISIS in Iraq and Syria and what came after it, through 2016 until now.

There could be so many directions! AR and VR are already becoming a part of it, but it is a matter of accessibility. There are so many wonderful initiatives to bring the still image to the public, other than in traditional mediums such as physical and online newspapers and magazines – pasting single photos with a long caption in areas near schools, using social media to elevate certain stories and ways of exploring more. The options are endless, but I think the more concerning issue is how we can sustain the use of imagery in a way that supports the visual artists/journalists and educating people about why imagery should be protected.

© for all videos Lumix Festival Hanover, if not indicated otherwise. 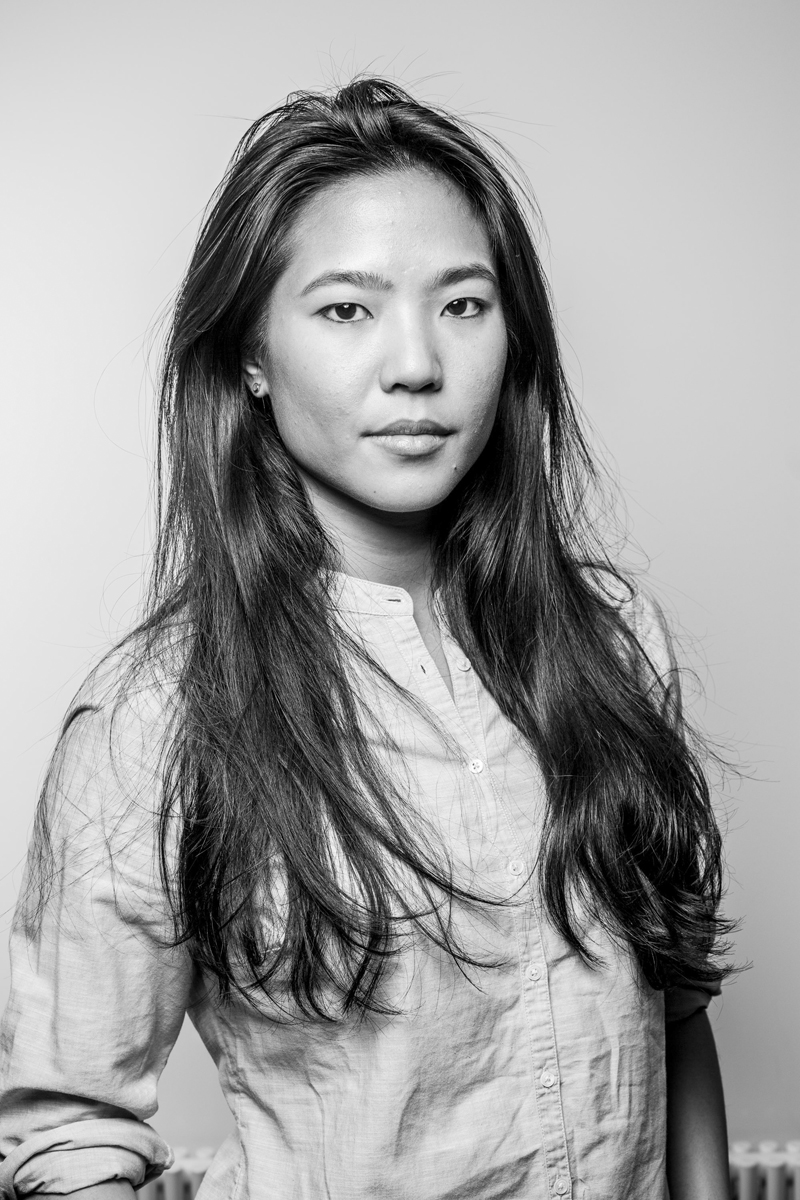 *1986 in Hong Kong
After completing a double degree in Journalism and History, Nicole Tung began working in 2009 as a freelance photojournalist for international media and NGOs in the conflict zones of the Middle East. She is interested in the consequences of war such as migration and post-traumatic stress among veterans, human rights and women’s rights in particular. For her reports on conflict, she won the 2018 James Foley Award as well as an honourable mention at the Anja Niedringhaus Award. 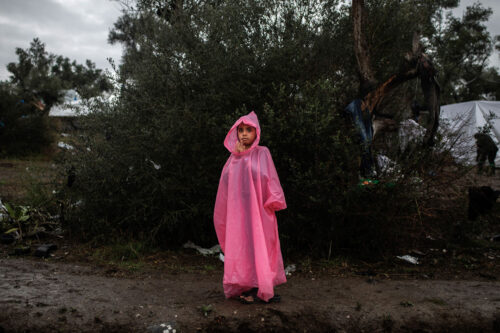 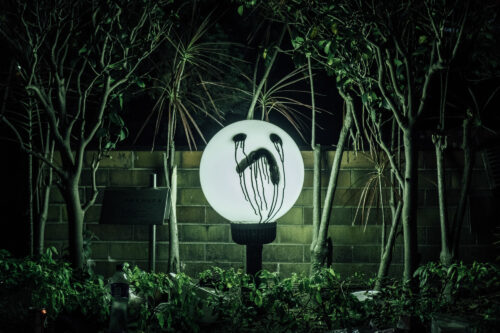