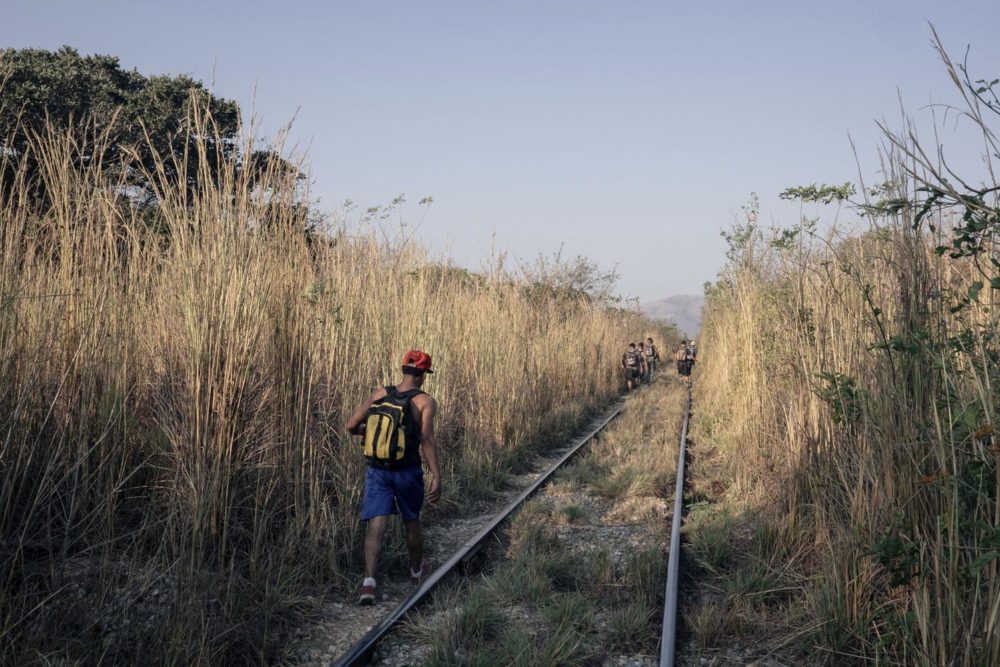 A refugee walks along the railway line that connects the cities of Arriaga and Chahuites. On this route, most migrants have their knapsacks and shoes stolen; armed attacks are also a frequent occurrence. Arriaga, Chiapas, Mexico, 7 February 2017. 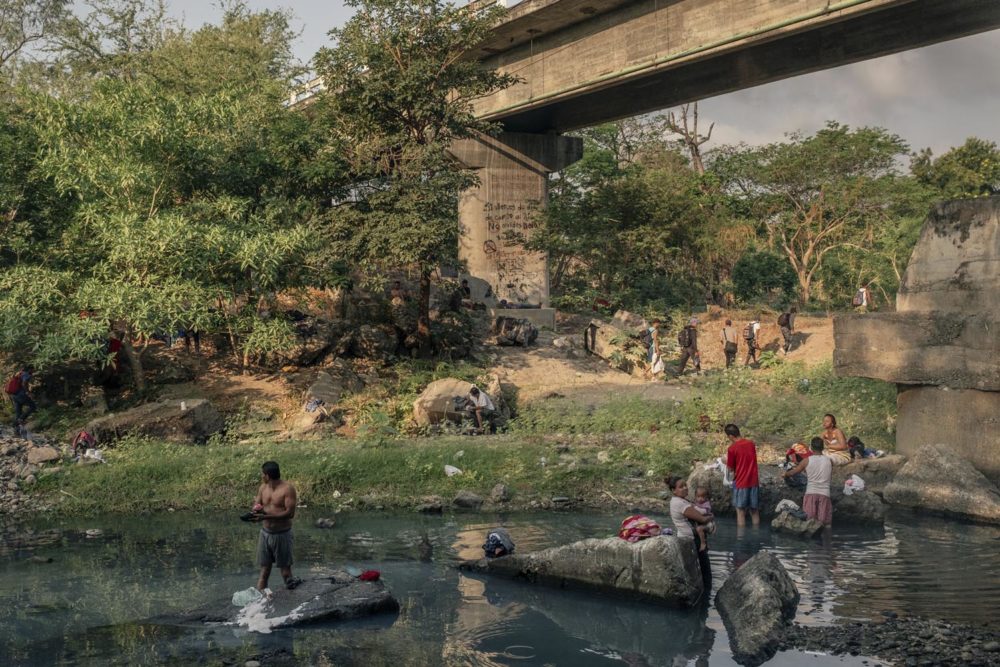 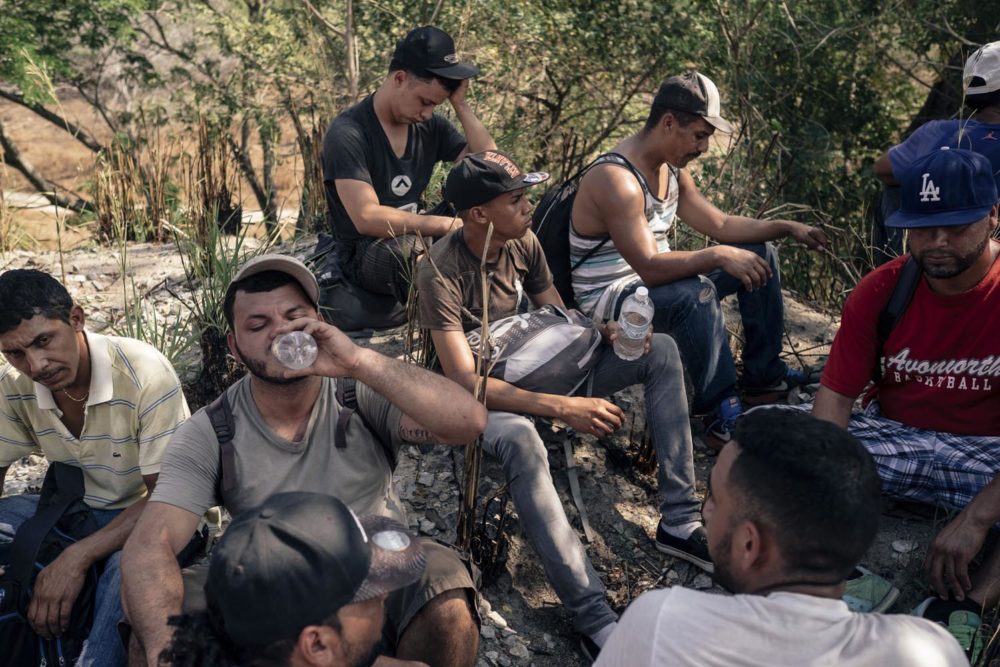 Young migrants rest after walking around ten kilometres in the hills between the states of Chiapas and Oaxaca. Arriaga, Chiapas, Mexico, 7 February 2017. 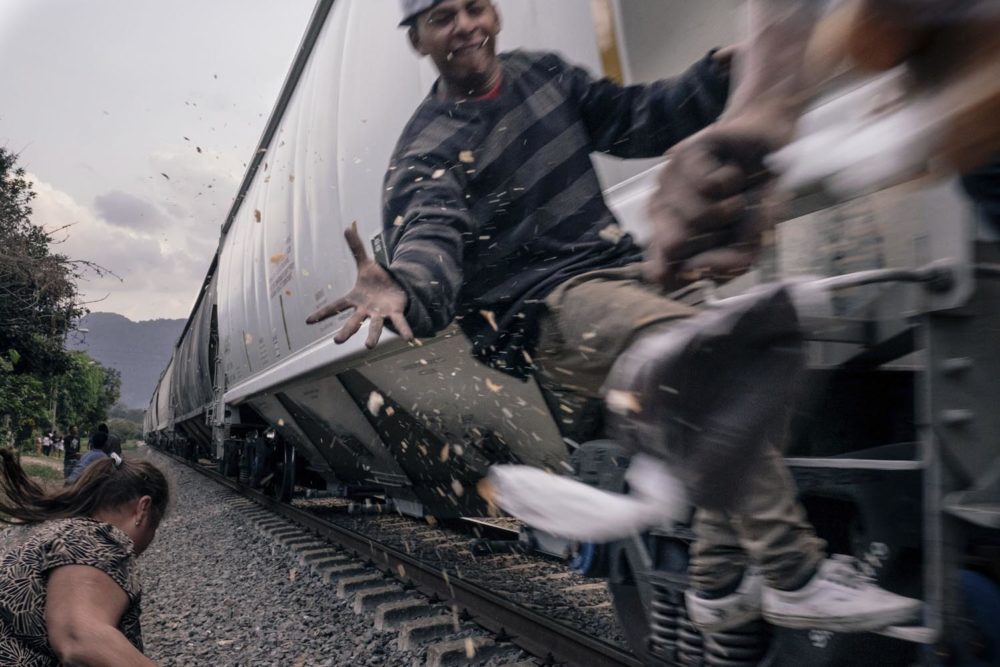 Norma (left), the founder of Las Patronas, gives migrants on board “la bestia” something to eat. Las Patronas is a small group of women who have been supporting Central American migrants with food since 1995. For some migrants, it is their first meal in several days. Amatlán de los Reyes, Veracruz, Mexico, 17 March 2017. 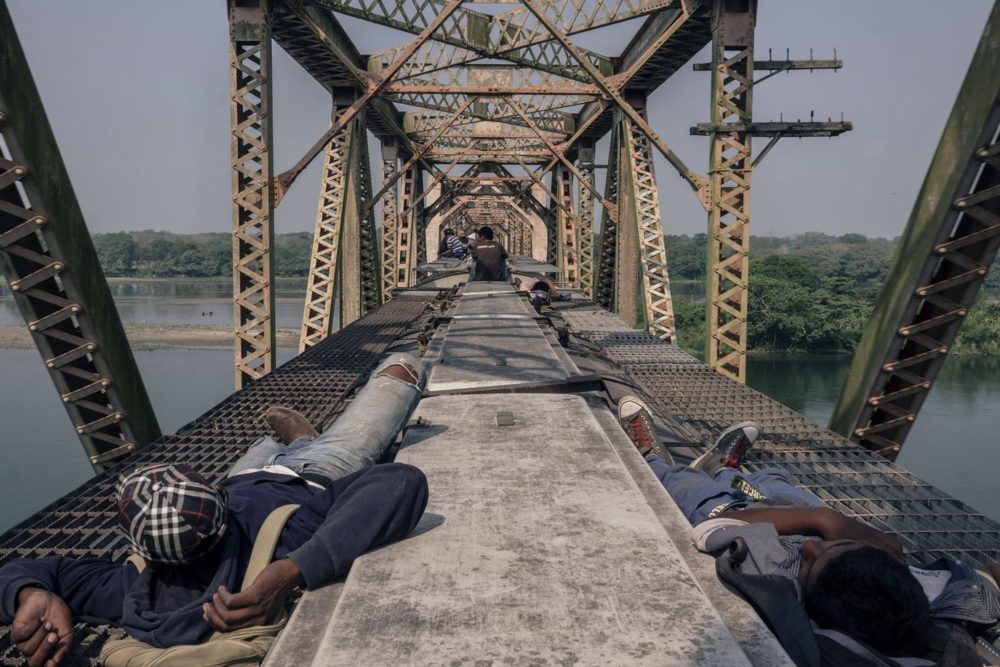 Two migrants awaken after their second night on top of “la bestia”. It is dangerous and difficult to sleep here. Some use a rope or belt to keep themselves from falling off. San Manuel, Tabasco, Mexico, 22 April 2017. 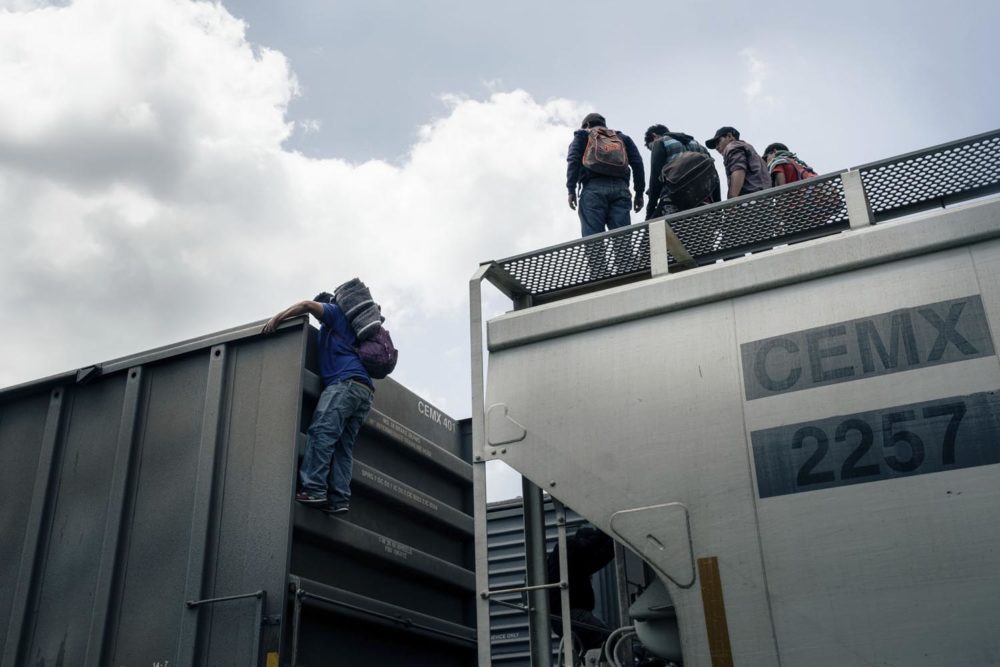 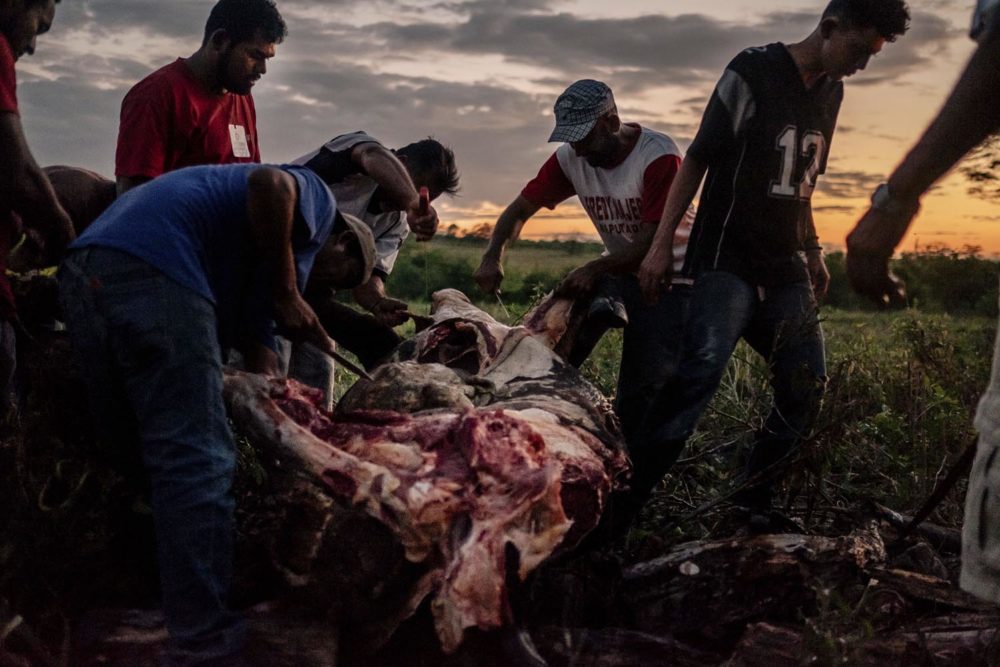 Refugees from “Casa del migrante 72” cut up a cow donated by a farmer to the home for migrants. Tenosique, Tabasco, Mexico, 10 March 2017. 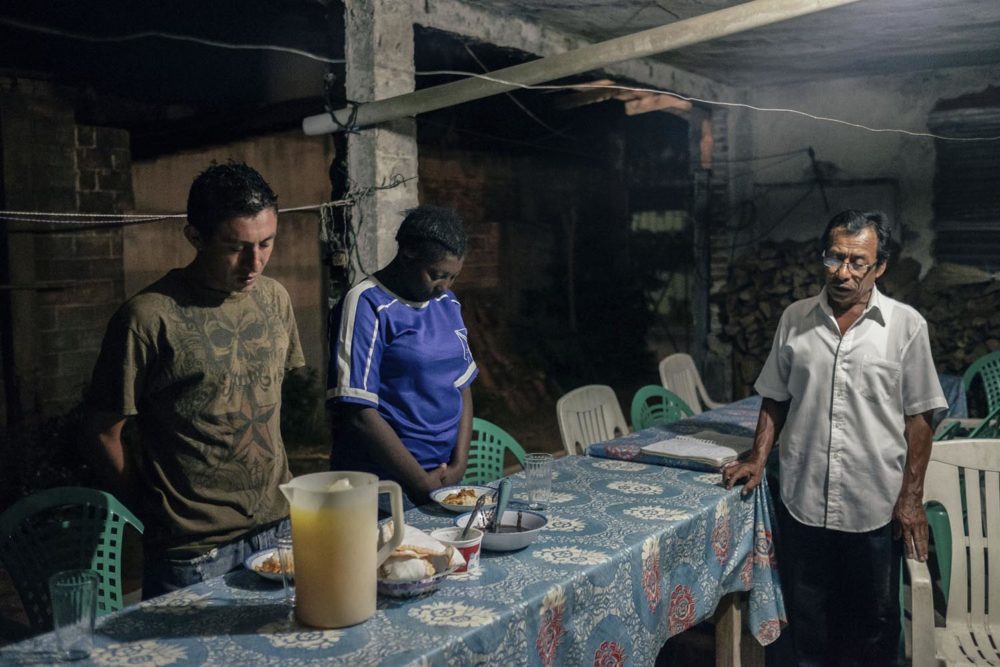 Paula and Luis fled Honduras and El Salvador because of the ubiquitous violence in those countries. After covering around 100 kilometres on foot, they have just arrived at the refugee home in Mapastepec. The residents of this southern Mexican city are actively involved: every evening, a different family invites refugees for dinner. Here, Paula and Luis pray before the meal. Mapastepec, Chiapas, Mexico, 4 February 2018. 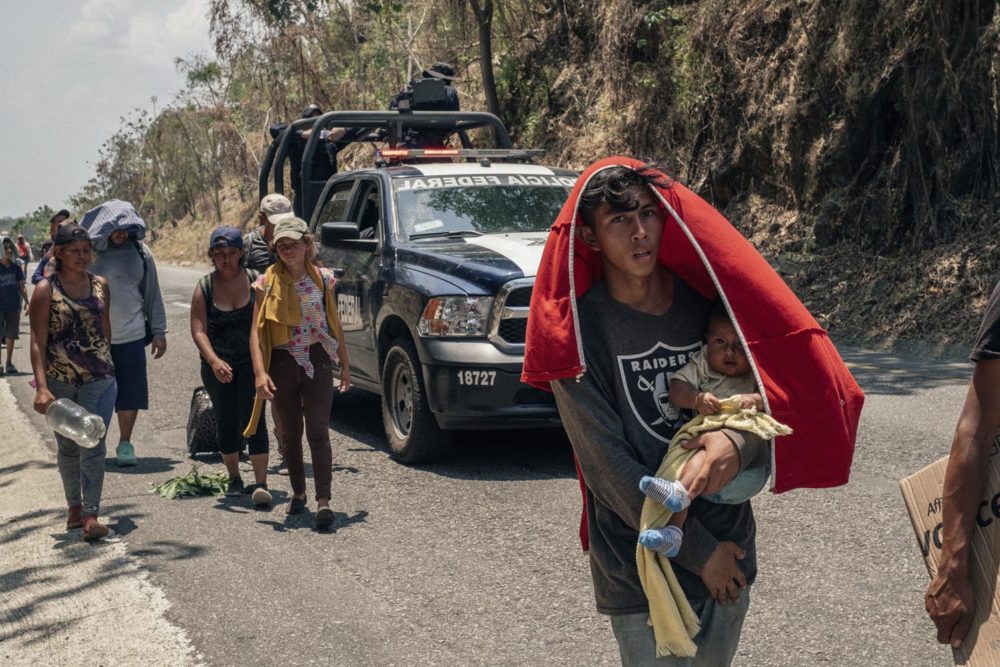 A caravan of more than 3,000 migrants from Central America, Cuba and Africa crosses Mexico in the hope of reaching the USA. A few days later, the caravan was violently dispersed by the Mexican authorities. Most families continued through the fields. Mapastepec, Chiapas, Mexico, 20 April 2019. 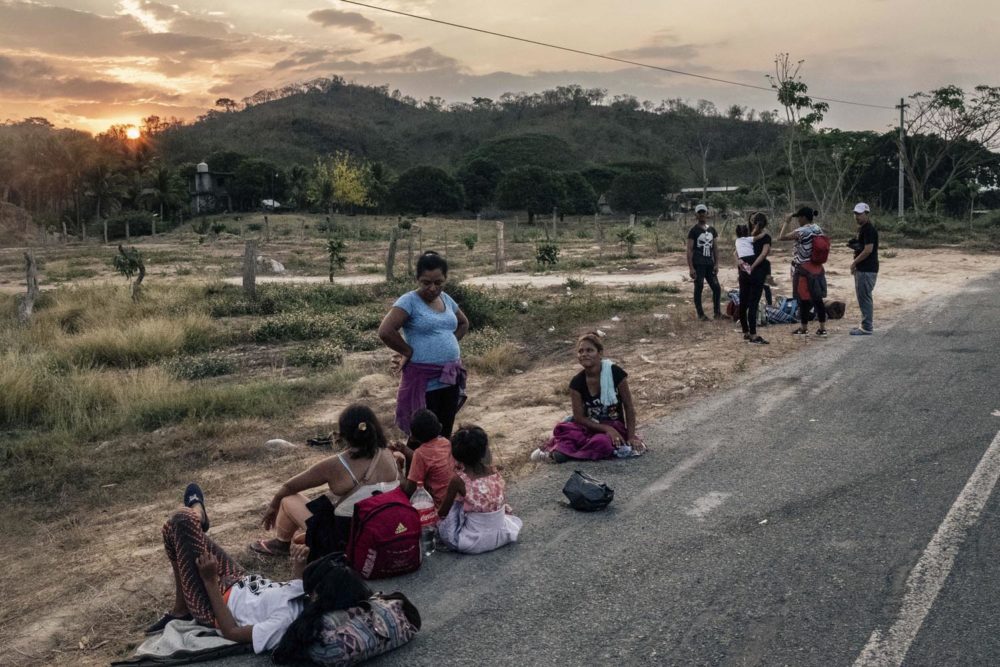 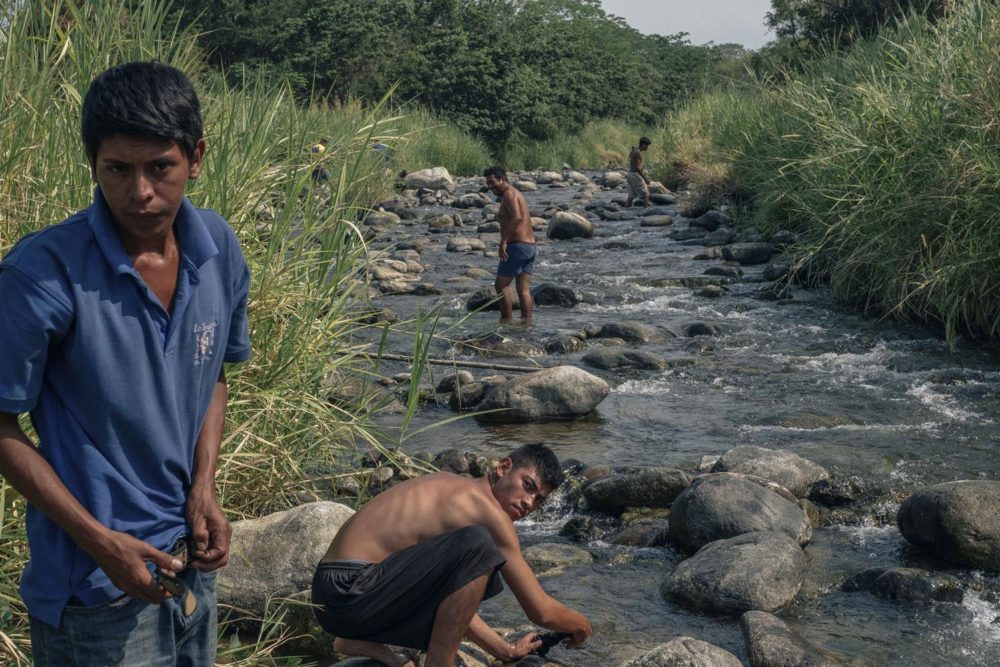 After 20 days of waiting for an asylum application in Mexico, Central American migrants spend a day on the riverbank near the mobile reception centre. Two hours later, they were arrested by Mexican migration police and deported to their home countries. Mapastepec, Chiapas, Mexico, 19 April 2019. 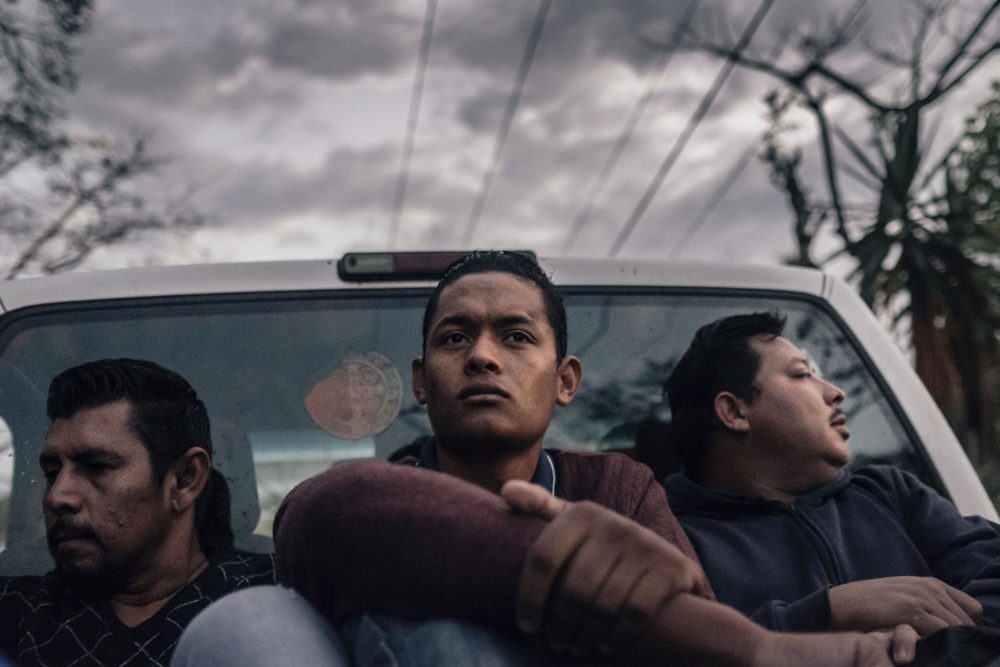 Norma, the founder of Las Patronas, drives some migrants to the bus. The migrants are afraid to cross the city on foot because they are being monitored by migration police. After more than three weeks of perilous travel, deportation is not an option. Amatlán de los Reyes, Veracruz, Mexico, 15 March 2017. 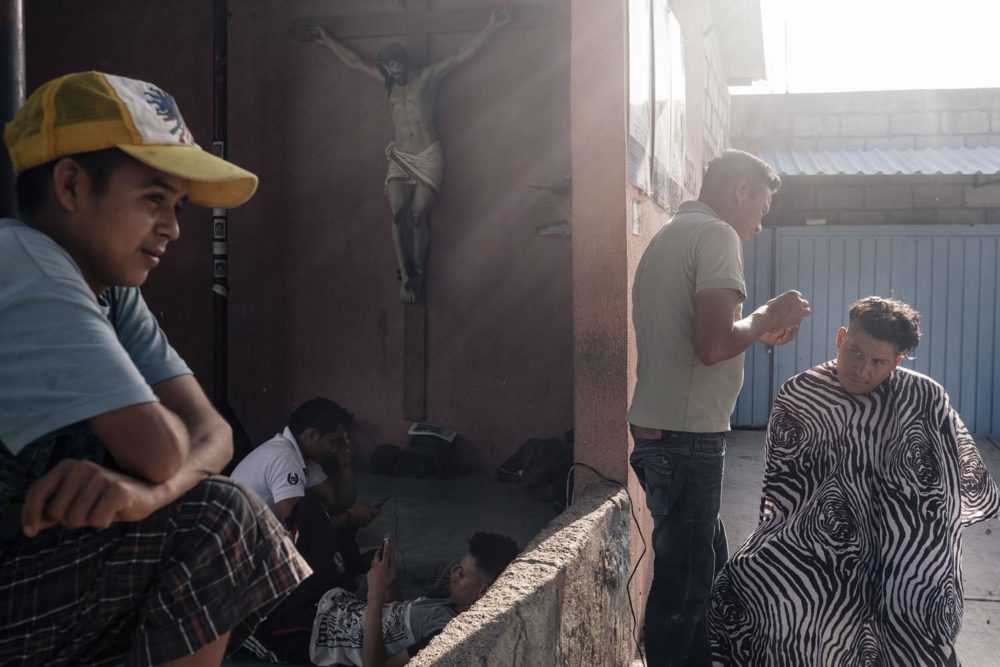 A man cuts his friend’s hair at the Catholic migrant shelter. This shelter is run by Father Alejandro Solalinde, whose work has saved thousands of refugees. It has also led to several death threats. Ixtepec, Oaxaca, Mexico, 8 February 2017. 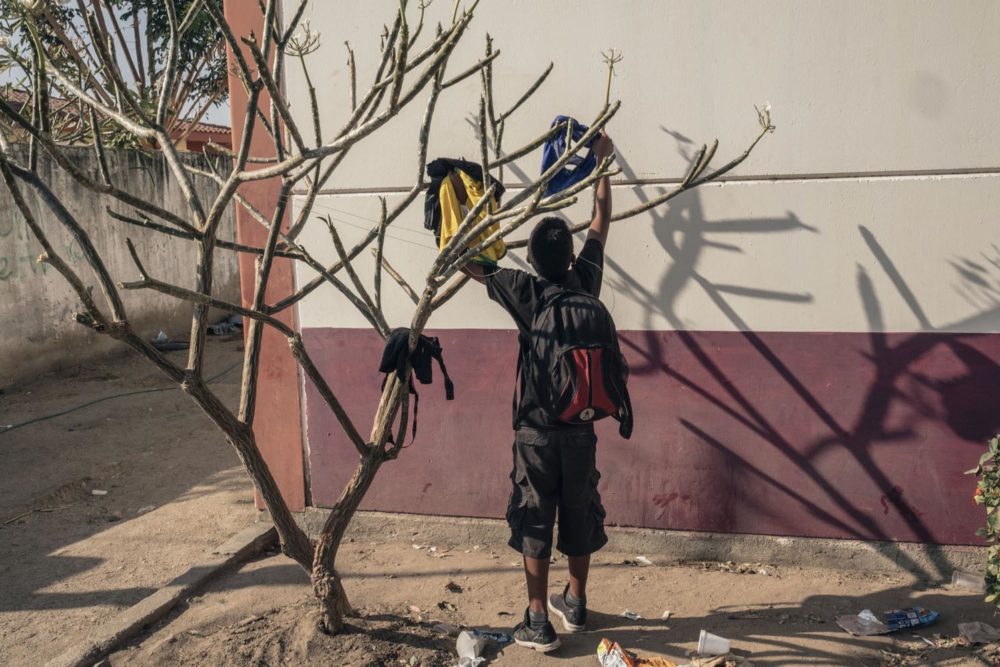 A man takes down his clean laundry before continuing on his journey. Ixtepec, Oaxaca, Mexico, 31 March 2018. 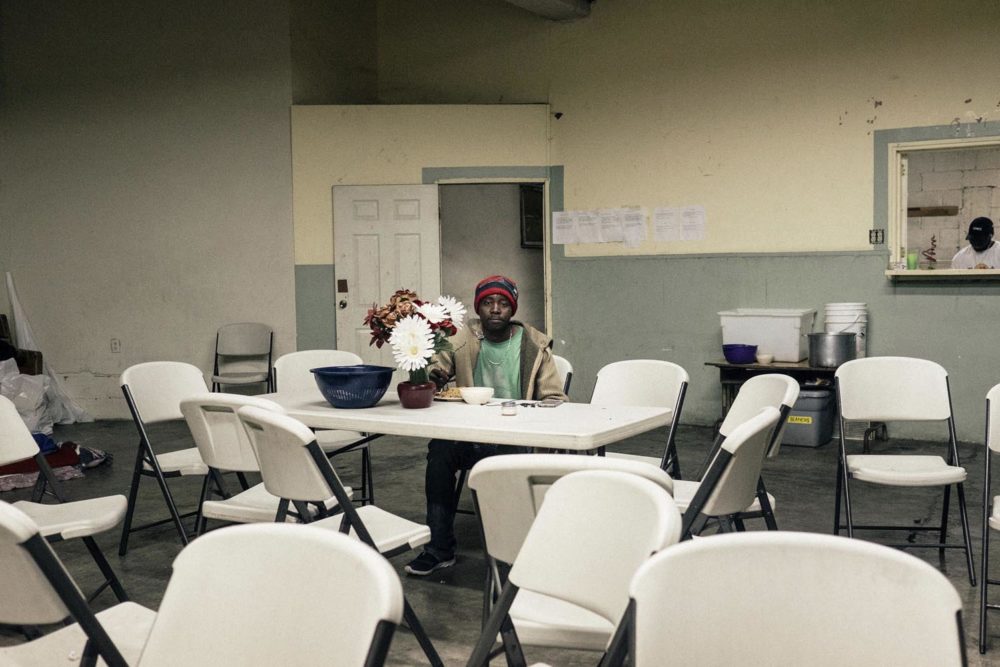 A migrant from Haiti eats after his day’s work in Tijuana. In this border city, thousands of Haitians are waiting for the US government to make an effort to find refuge for them. Tijuana, Baja California, Mexico, 9 May 2017. 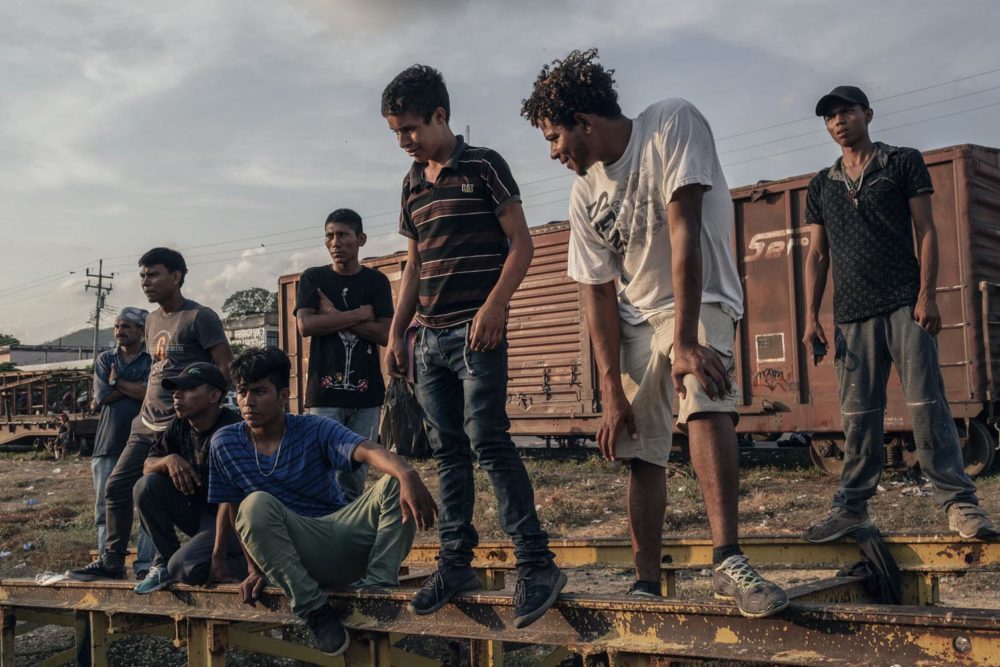 Refugees from Central America wait for the train to leave so they can continue their journey through Mexico to the USA. Arriaga, Chiapas, Mexico, 28 March 2018. 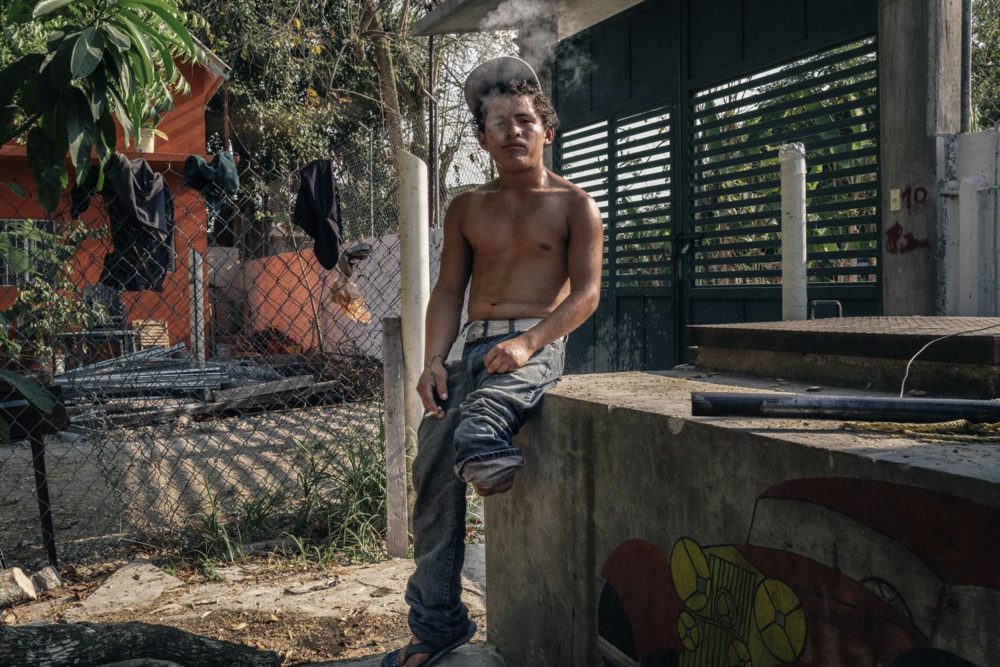 Carlos, 21, fell off the train when he arrived at the American border in Mexicali. Despite his handicap, he is again on his way. Tenosique, Tabasco, Mexico, 28 March 2017. 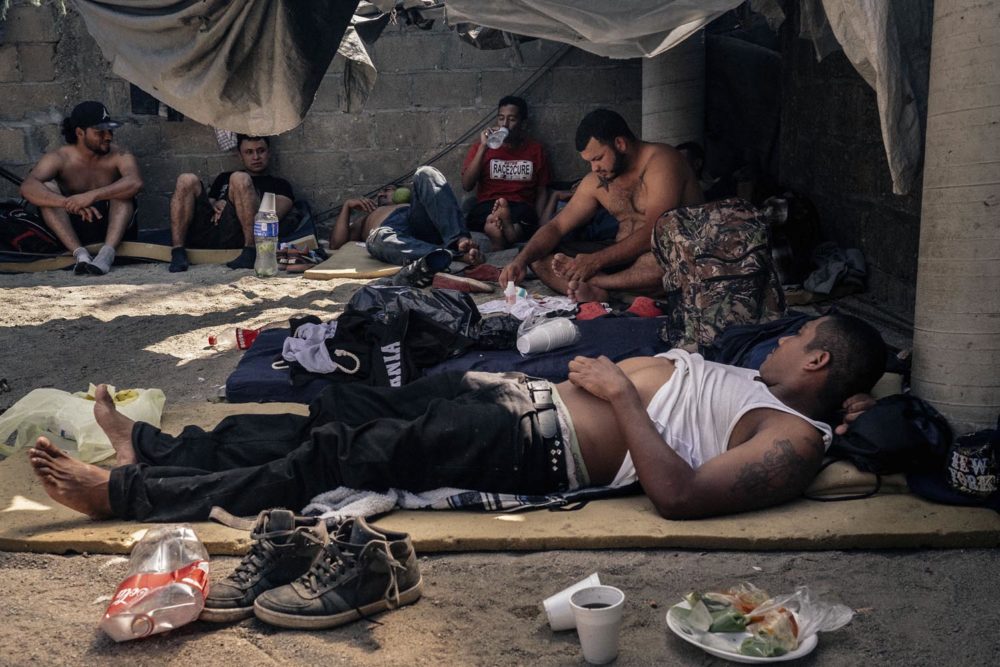 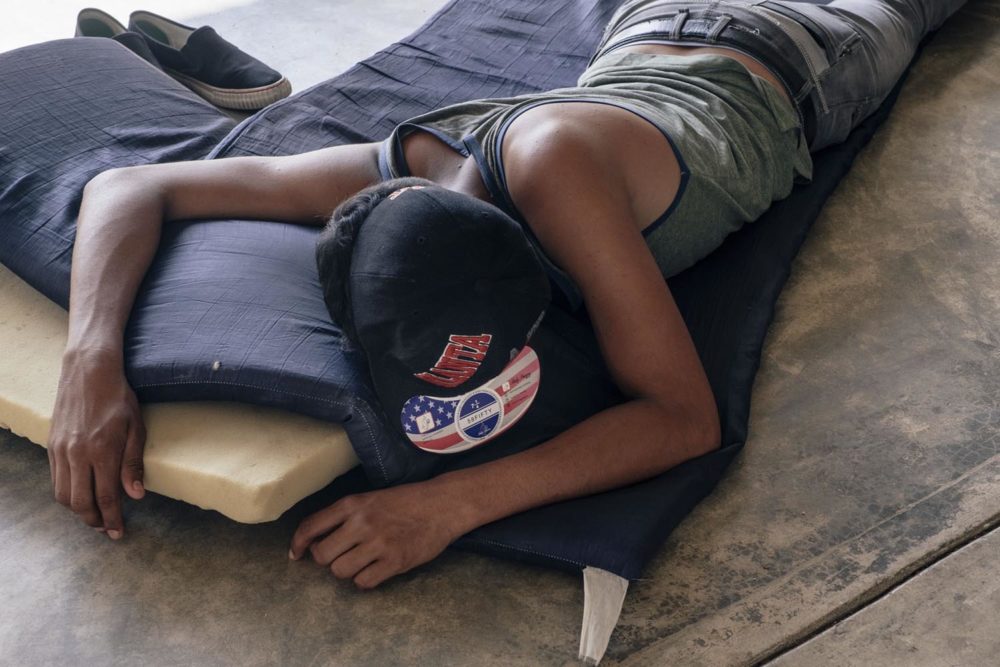 David, a 19-year-old Honduran, sleeps at a refugee centre after a two-week journey. On the following day, he sets out again. It will take him two days to walk to the next shelter. Arriaga, Chiapas, Mexico, 6 February 2017. 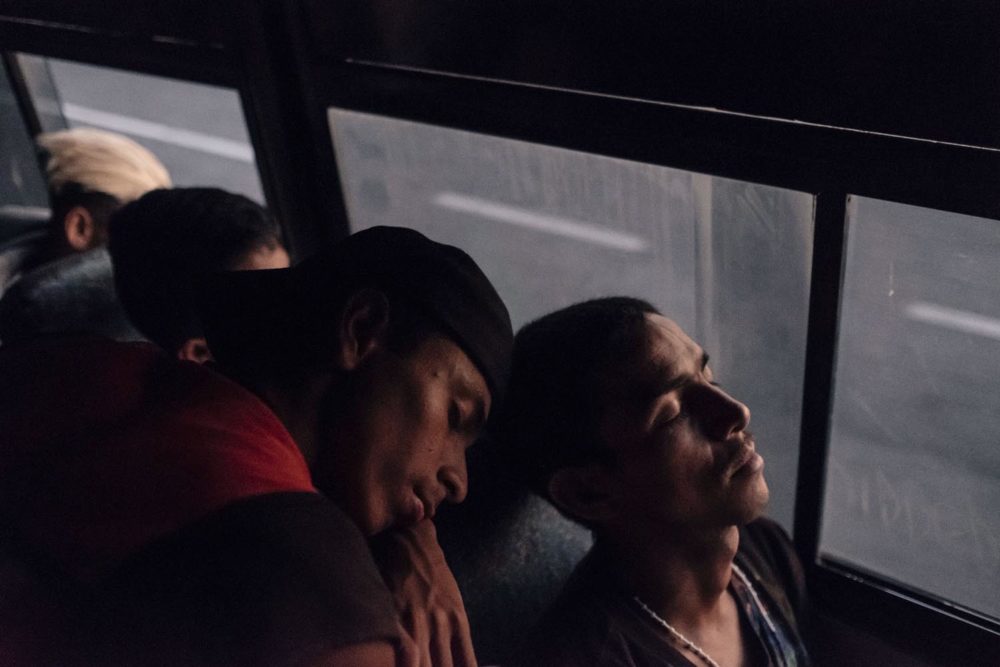 The Municipality of Ixtepec provides buses for a caravan of more than 1,500 migrants in order to take them to the village of Matias Romero, which lies about 70 kilometres away. Ixtepec, Oaxaca, Mexico, 31 March 2018. 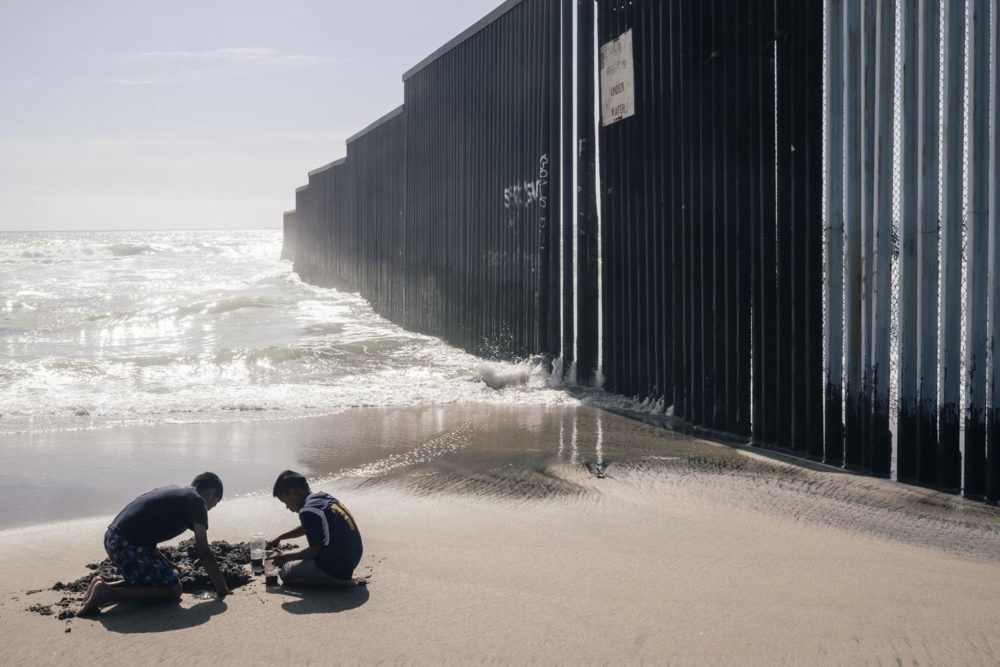 Two children play in the sand directly by the wall separating Mexico from the USA. The wall in Tijuana was built in 1994 and makes it even more dangerous for migrants to cross the border. Tijuana, Baja California, Mexico, 8 May 2017. 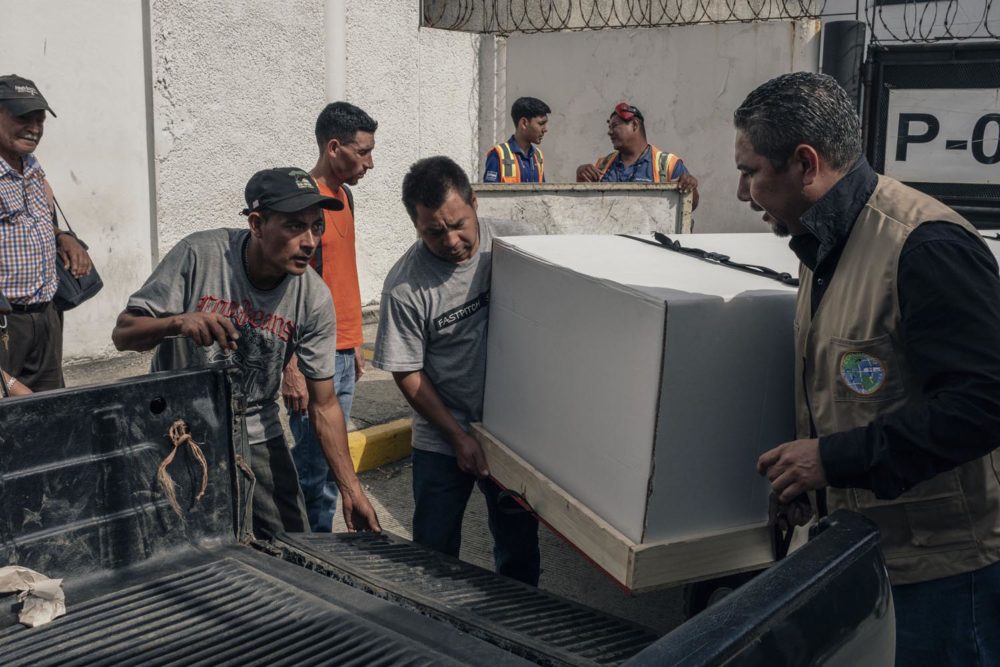 The arrival of Ingrid’s body. Ingrid died at the age of 29; five years after her disappearance, her remains were found in a clandestine grave on the border to the USA. Members of the COFAMIPRO organisation look after the family when the body arrives. COFAMIPRO helps people search for relatives who have got lost on their way north. San Pedro Sula, Honduras, 23 January 2019.

Every day, migrants from Central America try to enter the USA to escape violence, unemployment and corruption in their home countries. For these people, most of whom come from Guatemala, Honduras and El Salvador, the threshold to the American Dream lies in southern Mexico. Once they arrive there, the refugees travel on foot for days to reach Arriaga, the first city in the south-west where they can climb onto the freight train heading north. This train is called “la bestia” (Eng.: the beast) for good reason. No one knows when “la bestia” will arrive. When they hear its whistle blow, everything must happen quickly. No one knows whether the train will stop or rush past at top speed. No one knows whether they will end up on top of the train or underneath it. On the roof of the train, many exhausted migrants become victims of robbery or sexual assault; they are misused as drug mules or killed. Jeoffrey Guillemard started this photo project in 2017 – on the day Donald Trump was elected as President of the USA.

The Interactive Map illustrates Jeoffrey Guillemard’s journey through the localization of the photos and the photographer’s narrations.

»I think the boarders have to be more open than close.«

On September 19, 2017, at 1:14 p.m., a 7.1 earthquake on the Richter scale struck Mexico City. I was eating tacos with a friend, I had my camera with me, I took a taxi to the downtown area to document the situation. That day, more than 300 people perished under the rubble of their buildings. I worked as hard as I could, questioning my ethics and how far I could document the situation without an assignment and without being sure to sell my photos. I came home late, edited my photos and sent them to the French newspapers. Few editorials choose several of my photos to illustrate their respective articles on the subject. I was between the fear of an aftershock of the earthquake and in joy to have managed to do my work as a photojournalist, documenting and publishing. Feeling that I had made the right choice in documenting the people in search of survivors. The next day there was a deliverymen strike in France and no newspapers were published that day. It was hard but I knew it was my place to photograph what was happening.

I began making the “Southern Border” story in January 2017, a few months after Donald Trump was elected as the 45th President of the United States. During his campaign Trump spoke only about Mexicans and how a “great” wall could prevent illegal migration from their neighbouring country. I wanted to find out more and I discovered that more than Mexican migrants, there are many other people tempted to cross this border to escape violence in their own country. So I started to document the migrants’ journey of the people from Honduras, El Salvador, Guatemala, Cuba, Haiti … and all those migrants who take risks to travel through Mexico to reach the United States. This work continues until the end of Donald Trump’s mandate.

In the future, I think that slow photojournalism could become more creative and come out of the crisis to regain his true value.

© for all photos by the photographers
© for videos Lumix Festival Hanover, if not indicated otherwise. 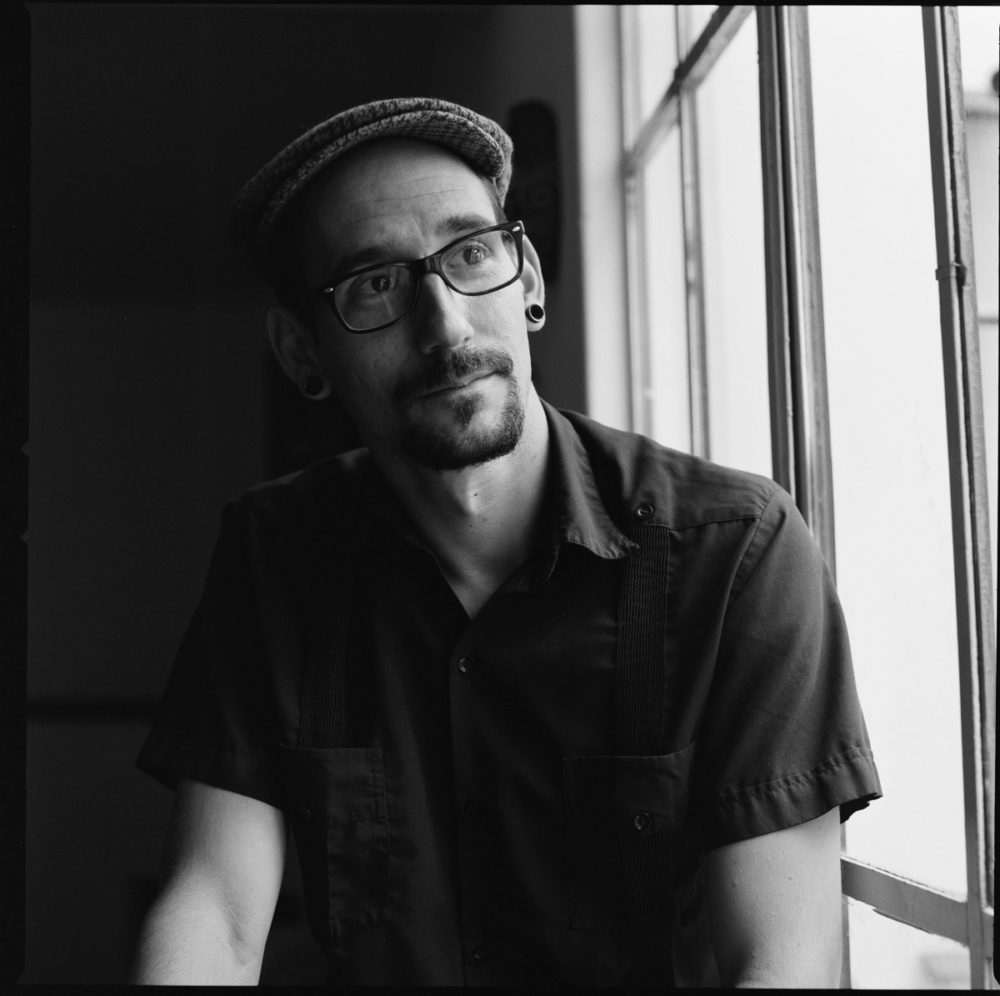 *1986 in Nancy, France
Jeoffrey Guillemard has worked throughout North America since 2006. He has spent most of this time in Mexico, where he now lives. After a period as an autodidact, he took up the study of Photography at the EMI-CFD in Paris in 2014. In particular, Guillemard documents current social movements, migration, sexuality and religious practices. In 2019, he won the first prize in the Migration category at Picture of the Year LatAm. His pictures have appeared in The Washington Post, Le Monde, Libération and other publications. 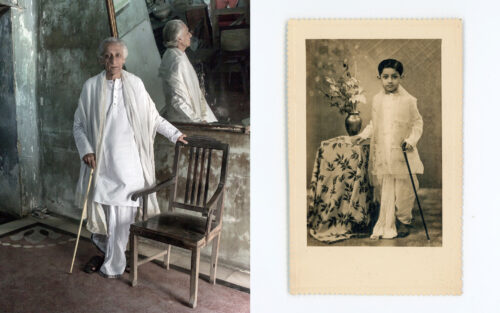 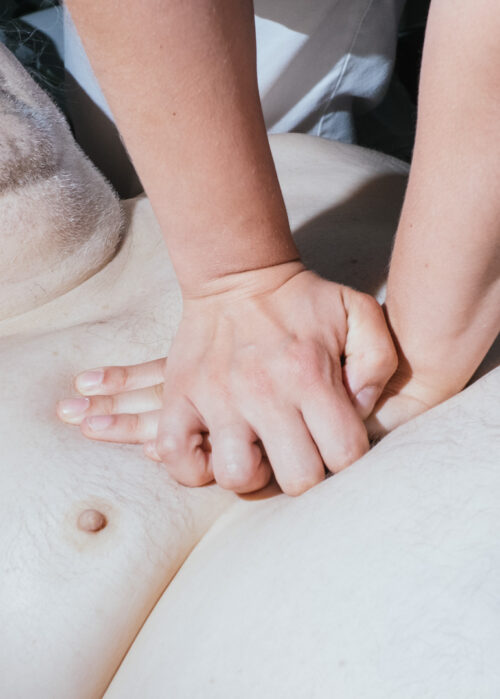